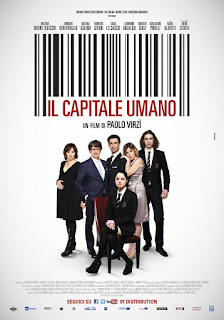 A movie set (at least mostly) at Christmas, focused on a car crash, told multiple times from multiple perspectives. If you feel like you’ve heard this one before, you’re not alone.

Il Capital Umano, however, is a very different animal.

It’s about class struggles, love and the lack of it, and attitudes around the value of human life. I mostly dug it through the first sections; Erin liked it a bit less.

It’s a combination mystery and social commentary, so don’t keep reading if you don’t want to learn what happens.

It starts out in the aftermath of a fancy holiday party. The caterers are working late into the night to clean up. The camera follows one particular gentleman; we learn that he’s cynical, tired and happy to clock out as soon as he can.

He mounts a bike and heads home through the dark, snowy countryside.

He is struck by a car on a back road.

At this point the movie jumps back six months and introduces our first viewpoint character: Dino. Dino is bringing his daughter (Serena) to visit her rich boyfriend, despite her embarrassment. He loses no opportunity to attempt a bit of social climbing, and impresses the boyfriend’s father with his tennis skills.

Soon he’s convinced the man to cut him in on some sort of open-secret stock market deal, where high rollers are making big risks and big wins. Dino doesn’t really have the money to play, so he secretly mortgages his house (we learn that his daughter has some legal claim to it, but he lies about having her approval) and borrows a large amount of money for a “business loan.” We also learn that Dino is married (not Serena’s mother), and his wife is pregnant.

The film jumps forward to Christmas. Dino has let his real estate practice dwindle in favor of pursuing his new friends, but now the rich guy barely sees him. They meet again at the fancy party from the beginning, which is an event at the fancy prep school both kids attend. He tries again to ingratiate himself, and he needs to talk business soon, because his loan is due.

He goes to the rich household the next day, thinking they’re playing tennis again, only to find there is a big business meeting, the fund is not doing well, and if he pulls his money out now he’ll lose almost everything.

Another time jump back to summer, and we start following character two: Carla, the boyfriend’s mom.

She is clearly unhappy with her life and her husband, unsatisfied with the fancy trappings of the rich. She talks her husband into funding the revival of a downtown theater, and she leads meetings about this. (Well, she sort of tries. That scene was some biting commentary on both the ineffectiveness of rich people trying to be patrons of the arts and the ineffectiveness of artists.)

Time passes, and around Christmas, her husband tells her that money has gotten tight, and he’s going to sell the theater building for condos instead. She has a minor breakdown in the parking lot of the prep school event, then goes and gamely fakes her way through the beginning of what turns out to be an obnoxious awards dinner.

Her son does not win the big award, and her husband leaves early to fly on business. She goes home alone, invites over the professor she had wanted to run the theater, and has sex with him in a surreal attempt to feel like she’s leading a more fulfilling, more dramatic life than she is.

At this point her son returns home, incredibly drunk, and she demands to know how he got home from the afterparty. He says that Serena drove him, but his car is present, and no one else is there.

Character three is Serena herself, and here is where I started to lose interest with the movie. I was enjoying the interlocking way the scenes played out, and the minutia of these characters’ petty lives. Serena’s life, meanwhile, turns out to be more cliche. We learn that she isn’t actually dating the rich boy anymore, she’s just trying to be friends, although he wants more.

Conveniently, she meets a tortured artist. Luca is a poor kid in mandated therapy after being accused of dealing pot. They meet once, and then again in the winter. They start seeing a lot of each other. She almost ditches the awards event to spent more time with him, but ends up going. She goes back to hang out with him afterward. She gets a phone call late in the night that the rich kid is super drunk, can she come take him home?

She objects, but they’ve already tried his mom and… she relents, and she and Luca go to the party. She fetches the kid, and gets him into her car. Luca offers to drive the kid’s SUV, and speeds off too fast, and…

A new section starts and everything moves forward. Serena gamely lies to the cops about who was driving the rich kid’s SUV. The next day, the cyclist dies in the hospital. Luca is terrified that with a juvenile record, he’ll be in terrible trouble if anyone finds out what happened. The rich kid is freaking out, not because he thinks he hit the guy, although his memory of the night is vague, but because he saw his mom with a guy not his dad. Carla is freaking out because the cops are convinced her son hit the cyclist.

Big old plot hole next: Serena conveniently not only sends incriminating information in an email, she leaves it up on her computer where her dad can see it.

Dino sees a way out of his financial dilemma and sells the information to Carla. Luca is convicted, but Serena promises to wait for him.

The rich family’s insurance settles up with the cyclist’s family. The entire film is leading to this - the idea of judging the worth of a human life in monetary terms. Dino would risk anything for money and status. Carla has money, but no happiness. Luca is at the mercy of the system in a way that Carla’s son isn’t. The cyclist’s family gets a paycheck, but loses their dad.