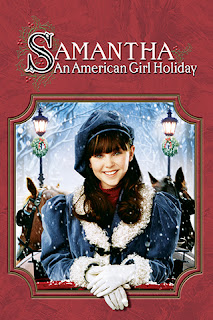 After much whining, I had an American Girl doll as a kid. I did not have Samantha. I had Kirsten, because yes, I read a lot of Little House on the Prairie, and my second choice would have been Molly, because I thought Samantha looked stuck-up.

I believe young me’s choice is somewhat justified by this stultifying mess of a “film.”

Apparently, long after my Kirsten had started collecting dust on my childhood bedroom bookshelves, the company decided to introduce companion dolls for some of their classic dolls, and what better way to sell new toys than with a made-for-TV movie?

The best thing I can say about this is that some of the costuming and sets are decent. Not really Samantha’s, though; those dresses look silly on an actual girl. On to the story.

Samantha is an orphan who lives with her rich grandmother in upstate New York in 1904. She’s feuding with the boy next door and eagerly awaiting the return of her rich uncle who dotes on her when a family joins the next-door household: a father and three young girls. Samantha is excited, even when she finds out that they’re poor and going to be servants. She and the oldest daughter, Nellie, soon become friends and Samantha teaches Nellie to read and write.

Of course this means Nellie gets into trouble a lot because she’s supposed to be working as a maid, not playing around with the neighbors. Blah, blah, we learn to our surprise that poor people are nice! Seriously, the writing in this is painfully on-the-nose. It might be riveting for the six-to-eight set...maybe.

Samantha’s uncle comes home with a new fiancee, and Samantha is jealous in a fairly creepy way. She and the new aunt eventually become friends, and they invite her to come live with them in New York City, but she’s afraid that they don’t really want her around.

Around this time is when there start to be some Sapphic undertones to Samantha and Nellie’s friendship. You don’t have to read it that way, but… 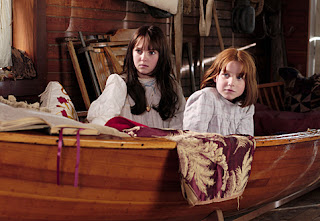 Samantha goes off, and she writes to Nellie a lot. Nellie writes back at first, but then the letters stop in December. Samantha’s uncle finds out that Nellie’s father died and the girls were sent to an orphanage in the city. Check off Christmas trope: filthy Dickensian orphans and corrupt child welfare system.

The aunt is a suffragette and a charity worker, and helps Samantha get into contact with Nellie by throwing money and influence at the problem. Samantha is horrified by the conditions and helps the girls escape from the orphanage. She hides them at her uncle’s house, in an attic where apparently no one goes for weeks at a time. Nellie’s determined to make a life for her sisters, so she goes out looking for work.

Meanwhile, Samantha is given a speaking slot at the Christmas pageant at her rich-kids school for a speech about progressive factories. You know where this is going. When one of the young girls falls ill, Samantha goes to get Nellie at work and witnesses the abusive and dangerous conditions in the factory.

The girls’ hiding place is revealed and the aunt and uncle get medical help for the sister. Samantha changes her Christmas speech at the last minute to be about reforming the factories and protecting the people that work there, and her activist aunt is very proud.

For Christmas, Samantha’s aunt and uncle give her some orphans. (They adopt Nellie and her sisters.) Throwing money at the problem wins again!

This was extremely boring, but only somewhat offensive. It’s a weird artifact, caught between shilling its product and an halfway-genuine attempt at a ham-fisted moral. Incidentally, Nellie is the doll released to coincide with the movie, of course, and at a quick glance, at least some of the other “companion” dolls also taught their friends important social lessons.