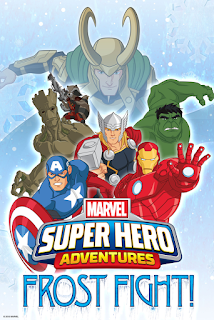 I haven't seen enough recent animated programming from Marvel to know whether or not this 73 minute special is in continuity with Avengers Assembled and the like, but I have seen enough to know I don't care. The last generation of Marvel cartoons - Avengers: Earth's Mightiest Heroes, Spectacular Spider-man, and the short-lived Wolverine and the X-Men - was fantastic, but it all got cancelled when Disney took over. While Mickey has been a great overlord for Marvel's comics, movies, and live-action productions, their animated series have been far less impressive.

This bizarre holiday special does not reverse that trend. To be fair, it has an intriguing premise - Santa Claus, re-imagined as a half-elf/half-ice giant who delivers gifts to all the nine realms, is being hunted by Loki, who's trying to steal his powers. In the right hands, this could have been a fun, zany adventure.

But these are not the right hands. It's pretty clear the people making this wanted to produce a holiday special in the vein of He-Man/She-Ra and Inspector Gadget: in short, something so bad it's good. This follows an 80's Christmas special template to a ridiculous degree, and there was clearly some thought poured into getting the mix right.

And, sure. If this had been made in 1987, the sheer absurdity of its existence would make it fantastic. But in 2015, it comes off as a cheap fabrication. You can't force "so bad it's good" - you need to fall into it. You need to set out to make something ambitious and fail your way to a classic. If you try to fake it, as this does, you wind up with something stupid to the core. And no number of gingerbread zombies or B-plots involving Mrs. Claus, Rocket, and Groot flying around space can fix it.

Actually, that was really the C-plot. The B plot focused on Hulk and Thor, inexplicably left behind when Iron Man, Reptil, and Captains America and Marvel went to the land of the "Light Elves" and wandered around candy cane forests. That's right, they dealt with crap in Thor's backyard while he stayed behind to come up with a way to deliver Christmas gifts if the others failed to find Santa.

If you glanced through those character names and wondered "who the hell is Reptil," you likely had something in common with any kid unlucky enough to stumble across this. Reptil is a fairly new, fairly obscure Marvel character who has dinosaur powers. Here, he basically fills in a Spider-Man capacity (i.e.: the young recruit with more heart than good sense) and also adds a smidge of token diversity to the cast (he's Hispanic). I've read a few comics with Reptil, and I recall him being far, FAR more interesting than this.

Same goes for the rest. Captain Marvel's just sort of used for muscle, Iron Man is stuck up, Hulk is infantile, Thor's obtuse, and Captain America just sort of orders everyone around. There's no nuance or depth here whatsoever.

The best characters, by far, were Santa and Mrs. Claus. Santa comes off as a nice mix of Norse influence and the modern incarnation, while his wife is kind of an adventurer. I could have done without the cheesy re-enacting of the asteroid field from Empire Strikes Back (seriously - they aped just about every shot), but - if they were going to do it, I'm glad she was piloting the ship.

I also appreciated that Santa's elves were basically of the Tolkien/D&D variety, and that Santa's powers were actually quite formidable. Oh, and that there were Lovecraftean horrors used by Santa's helpers as guardians - that was cool. But any goodwill they'd otherwise have earned was squandered in dull fight sequences, awful jokes (yes, I know the writers wrote the jokes to be stupid, but this is one case where succeeding does not help you), one-dimensional characters, and cheesy cliches.

This was idiotic and pointless. Worse yet, it's a waste of more than an hour of your time. Skip it, and watch something that was actually made in the 80's. Hell, even the animation will be better.
2015 Comedy Erin Snyder Sucks Superhero