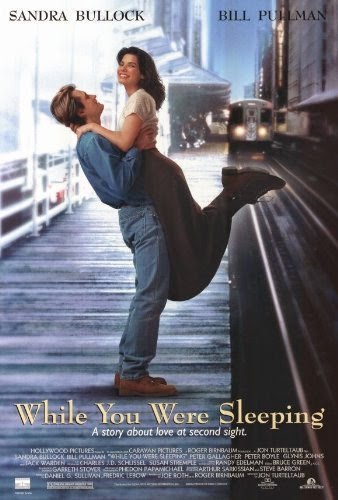 For those of you lucky enough to have missed the 90's, the decade was full of movies like this. The rom-com was about as common then as superhero movies are now. This one's no worse than most, but that's a relatively low bar.

This movie starts by introducing us to Sandra Bullock, who plays a character whose main character trait is that she's lonely. Yes, it's Christmas, and she has no one to share it with other than her cat. Also, she wants to travel.

Her job is to collect tokens from people boarding the Chicago subways. The one bright part of her day is when this one random guy comes by. She's never spoken to him, but she falls for him anyway, because she has serious emotional issues.

On Christmas morning, which she has to work because her coworkers have people who care about them, she sees the random guy get attacked and fall onto the tracks. She jumps down and pulls his unconscious body out of the way of the train. The guy lands in a coma, and Bullock follows him to the hospital.

Due to an implausible and contrived series of events, his family winds up thinking she's his fiance, leading to a series of scenarios a cynical person might mockingly call "humorous." She celebrates Christmas with them and winds up being accepted into the family. Everyone just accepts her without question.

Everyone, that is, except for the coma-guy's skeptical yet kindhearted brother, played by the more conventionally attractive Bill Pullman. He's always had issues with his brother, who we begin to learn is a pretty mediocre human, anyway.

She's freaked out by the misunderstanding and wants to set things straight. Unfortunately for those of us watching the movie, this takes an hour and change to get resolved. Even the guy waking up doesn't do the trick: everyone assumes he's got amnesia, and he's dumb enough to believe it.

Needless to say, the movie resolves with her marrying Pullman's character. The fact she knows him only slightly better than his brother at this point isn't brought up. But she winds up with a guy who makes rocking chairs, a family of over-the-top character actors, and a chance to utter the movie's title as the end credits roll.

There are worse romantic comedies out there, but that's no reason to waste your time with this garbage. The movie is cheesy, boring, and moronic. Skip it.
90's Comedy Erin Snyder Movie Sucks