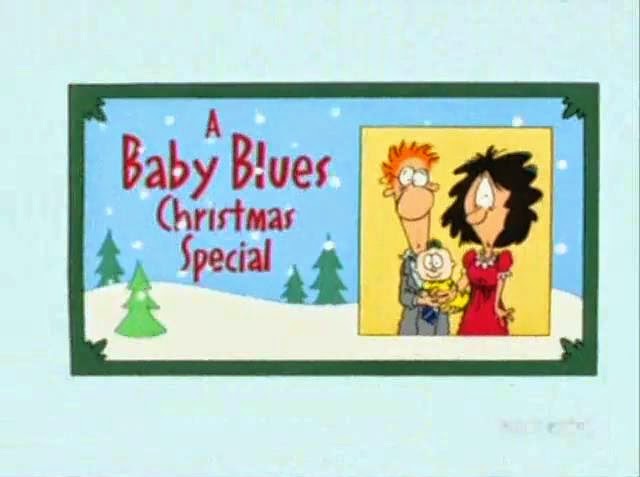 Remember the show Baby Blues? Of course you don't. Apparently, it was one of the myriad animated sitcoms that was produced in the past two decades that producers hoped would miraculously obtain the kind of success The Simpson enjoyed, but that wound up being cancelled after half a season. When you think about it, it's a lot like the gold rush. Sure, every now and then a show like Family Guy or King of the Hill will inexplicably pull a nugget of gold out of a mountain stream in Colorado, but for every one of them a dozen Family Dogs and Capital Critters drown while trying to cross the Mississippi River.

Baby Blues was sort of like a cross between Dr. Katz and Dilbert. It was based on a comic strip of the same name, which I've also never heard of.

The Christmas Special was also the series's pilot. At least it was supposed to be: the WB produced it then sat on it. They wound up airing five other episodes then cancelling the series. It was eventually aired late night on Cartoon Network's "Adult Swim" a few years later.

This was relatively edgy for a network animated series. It didn't go as far as Family Guy, but it did acknowledge the existence of sex. More than that, the overall tone was a bit more adult. The humor was geared towards its believable portrayal of stress and depression, which made for an experience quite a bit darker than you get typically got from The Simpsons at the time. It was also apparently darker and more mature than the comic's creators wanted, at least if Wikipedia is to be believed.

Structurally, it was presented as a series of vignettes delivering a few jokes and devoting more time towards building characters than plot. There was conflict around the new parents growing frustrated with each other, but it felt like it was there to justify the scenes around it, rather than organically developing out of them.

The episode was well made, and the jokes were generally funny. It tried filling a niche that's typically left empty. Unfortunately, it's left empty for a reason: the show succeeded in being depressing, but that who wants to be depressed watching a realistic cartoon? I absolutely believe animation is an immensely versatile medium, but it generally falls flat when doing something that can easily be accomplished in live-action.

This worked well with Christmas elements, using them sparingly but keeping them present. From the use of the song "Blue Christmas" in the episode's opening to the incorporation of an office Christmas party, they certainly kept the holiday nearby. There was also a sequence showing them going Christmas shopping with the newborn. Christmas was always in the background, but the characters remained the focal point.

The most significant Christmas elements came at the end, when they took the baby for a drive late on Christmas Eve and wound up at a diner several hours away. There was a surprisingly believable nativity allusion, coupled with an "is it Santa Claus?" moment with a great punchline.

All in all, not a bad special, but I don't think the world missed out on anything grand when the WB shut down the series.
00's Comedy Dramedy Episode Erin Snyder