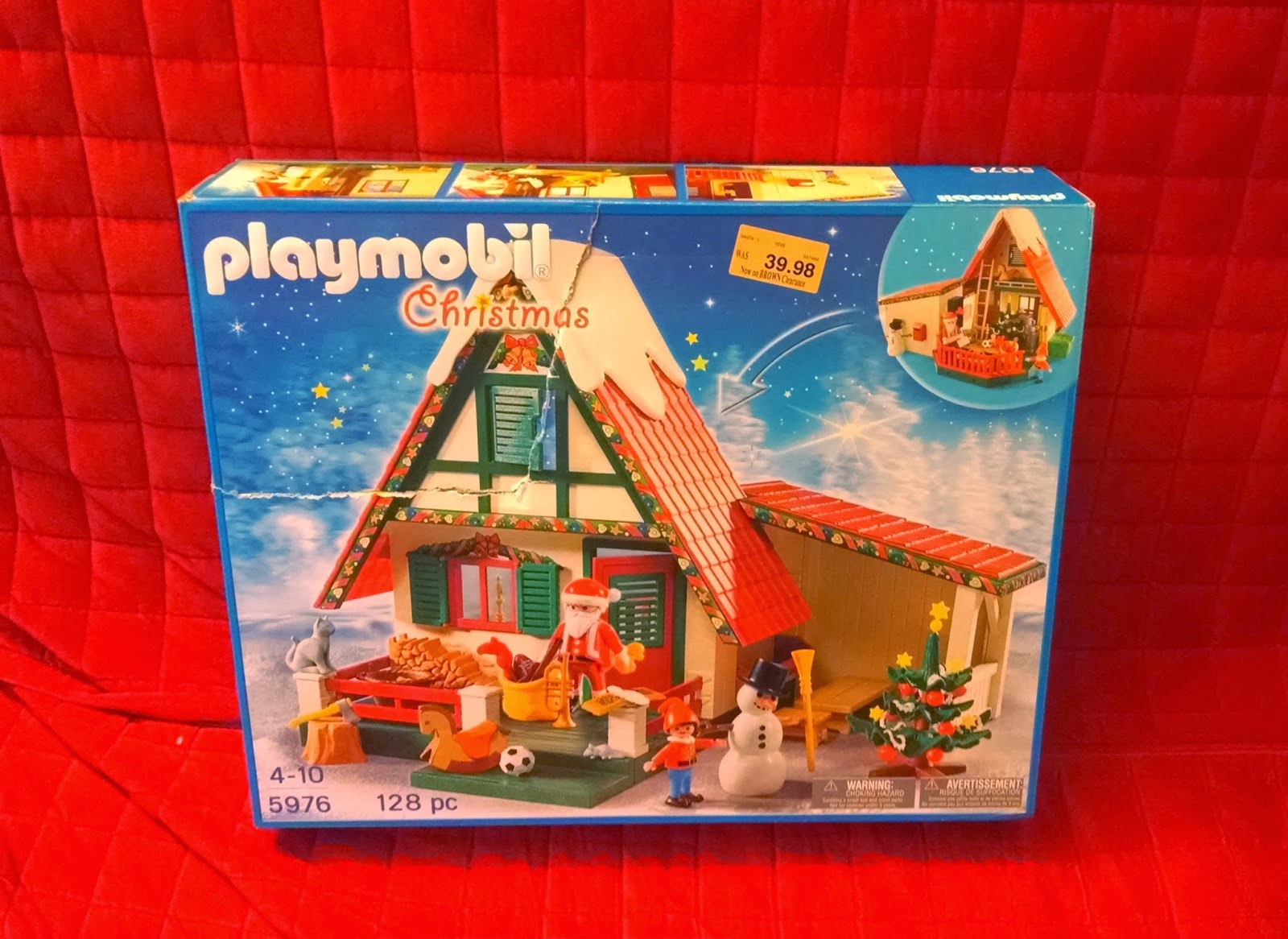 This set isn't actually called "Santa's Workshop." All that's written on the box is "Christmas" and an item number. But it sure looks like they were going for a workshop effect, so that seems like as good a way as any to differentiate it from the Santa/reindeer set I bought three years ago.

Speaking of the box...

It was pretty smashed up. But it was also on sale for 85% off, thanks to a summer clearance sale at Toys R Us. I wound up paying about $6 for this, which is just under half what I paid for that other set. I figured that was a bargain even if half the pieces were missing (I was even happier when I discovered everything was still in the box). 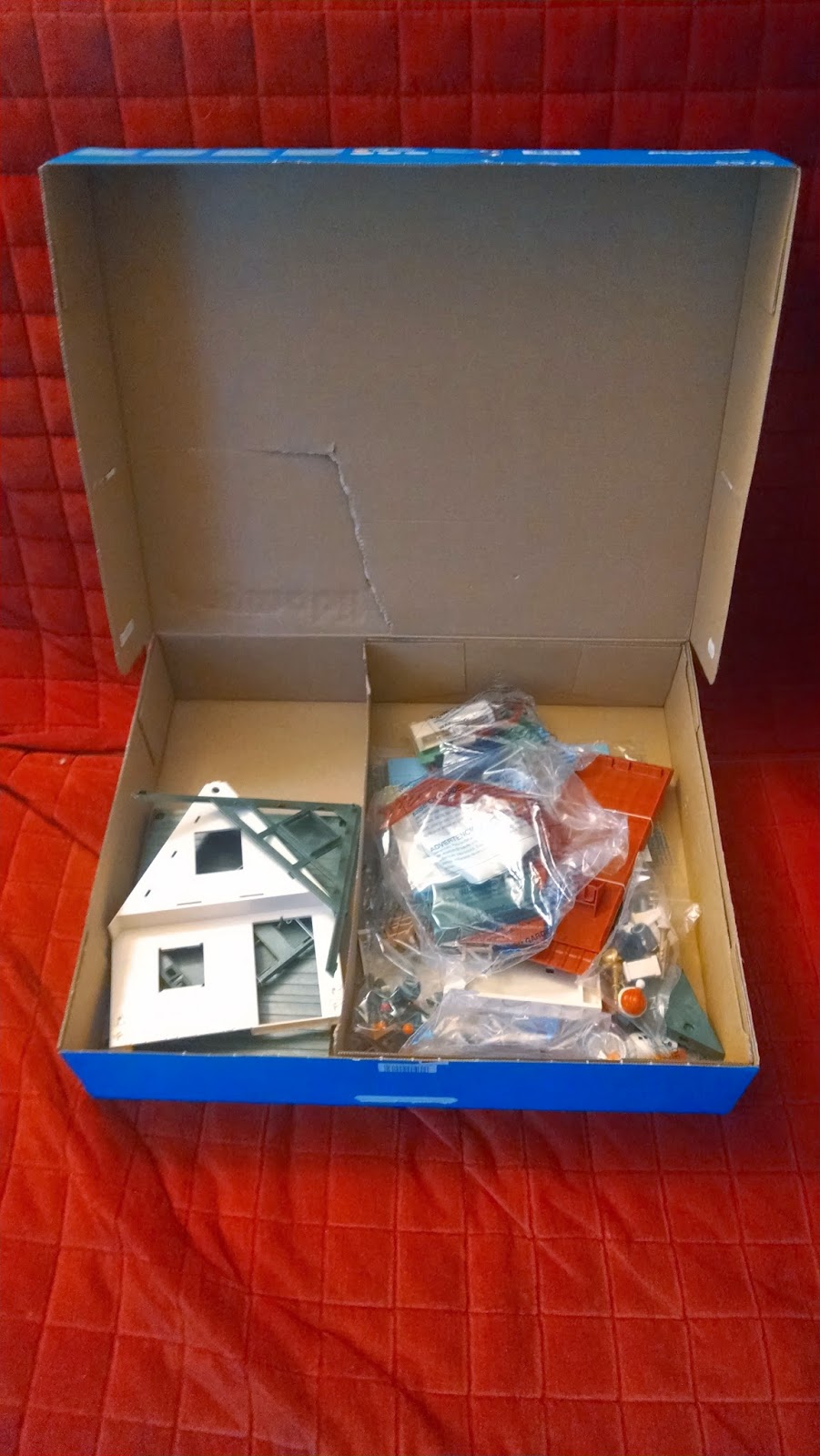 Open this up, and you're staring at a bunch of bags and plastic panels. You also get directions and a tool for inserting plastic pegs into the larger pieces. Here's a look at the tool and a page of the instructions: 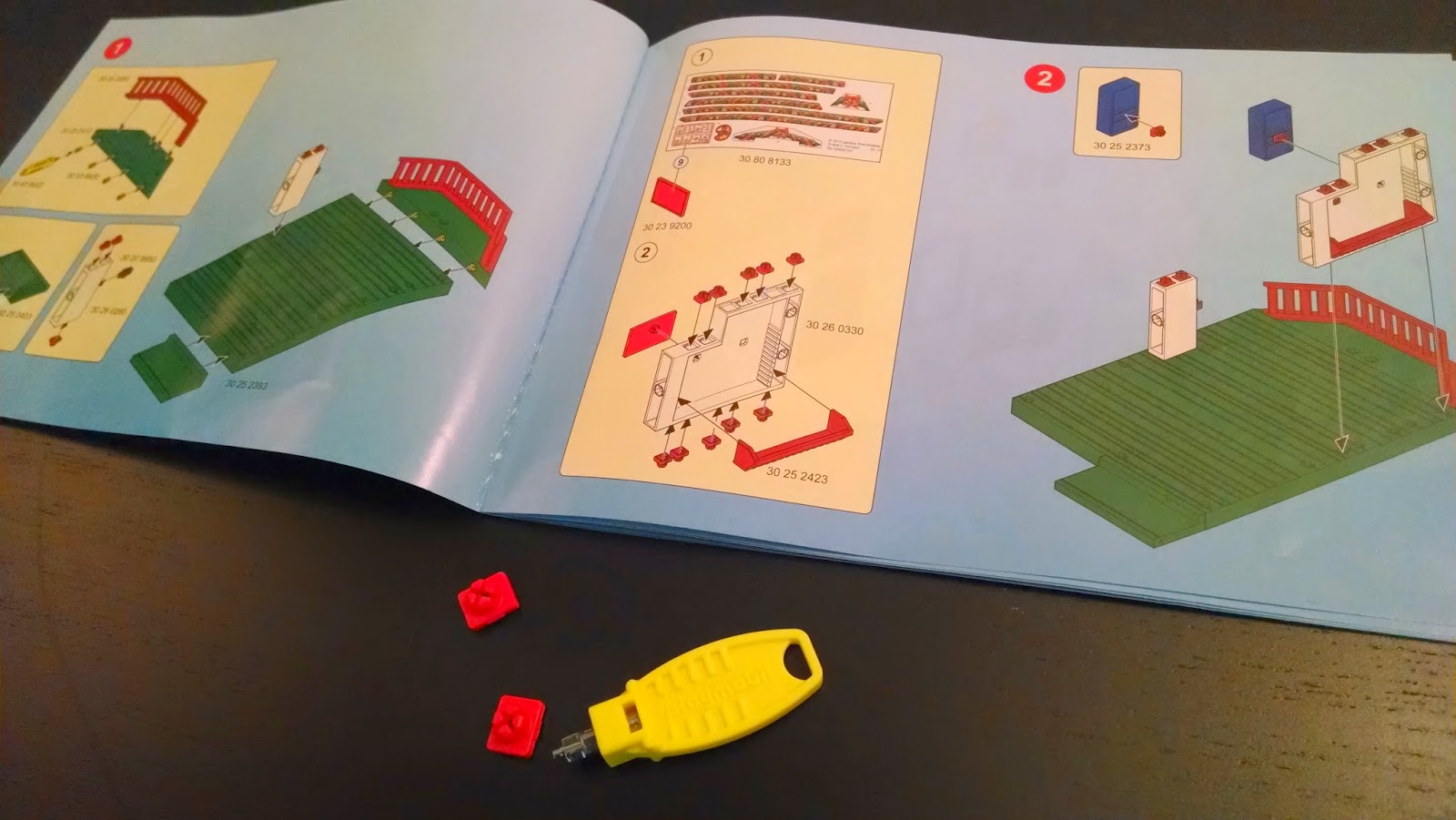 Let me sum that up for you: if you give this to a five year old expecting anything other than a mess, a dozen lost parts, and tears, you're in for a disappointment. This isn't especially hard to put together, but it does require some time and effort. You're going to have to go IKEA on this thing's ass if you want a workshop that looks like the picture on the front of the box. 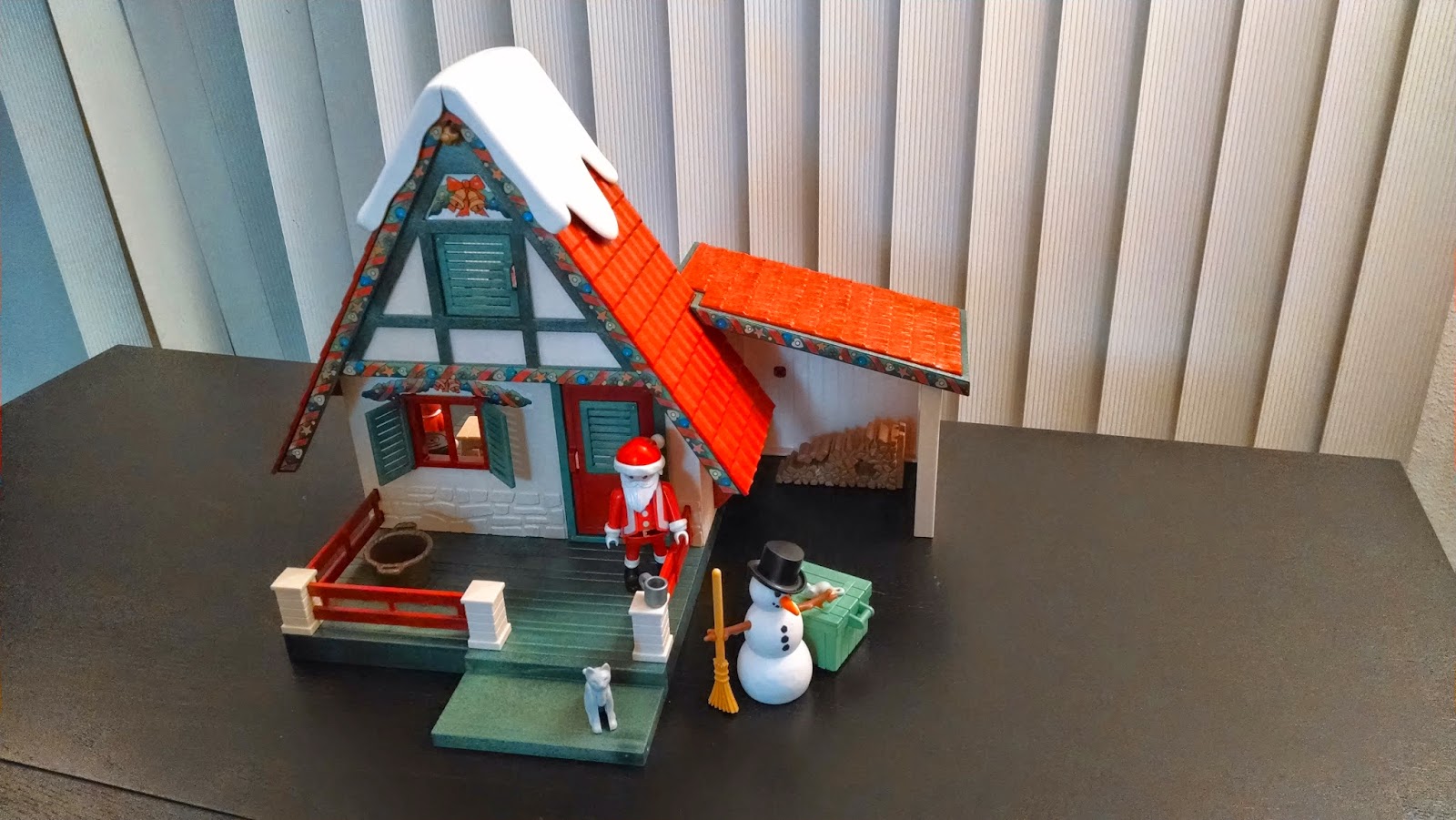 Surprisingly, your effort is rewarded. While the finished product might not top any "toy of the year" awards, it's a cool playset. The door and windows open and close, as does the mailbox. 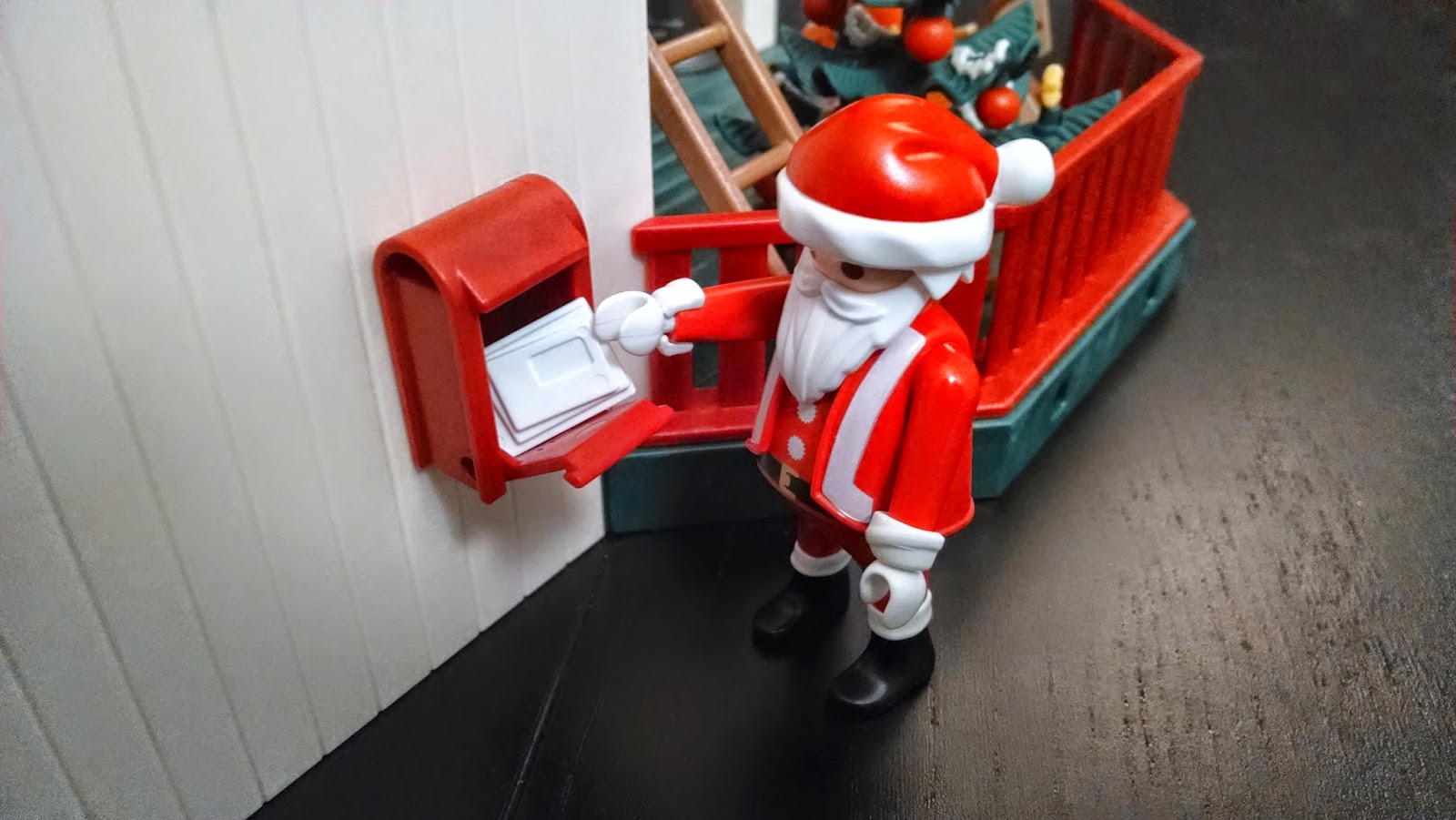 Like everything Playmobile produces, it's sturdy. Seriously sturdy: highly-evolved, radioactive cockroaches will be hanging out in these long after the nuclear apocalypse. 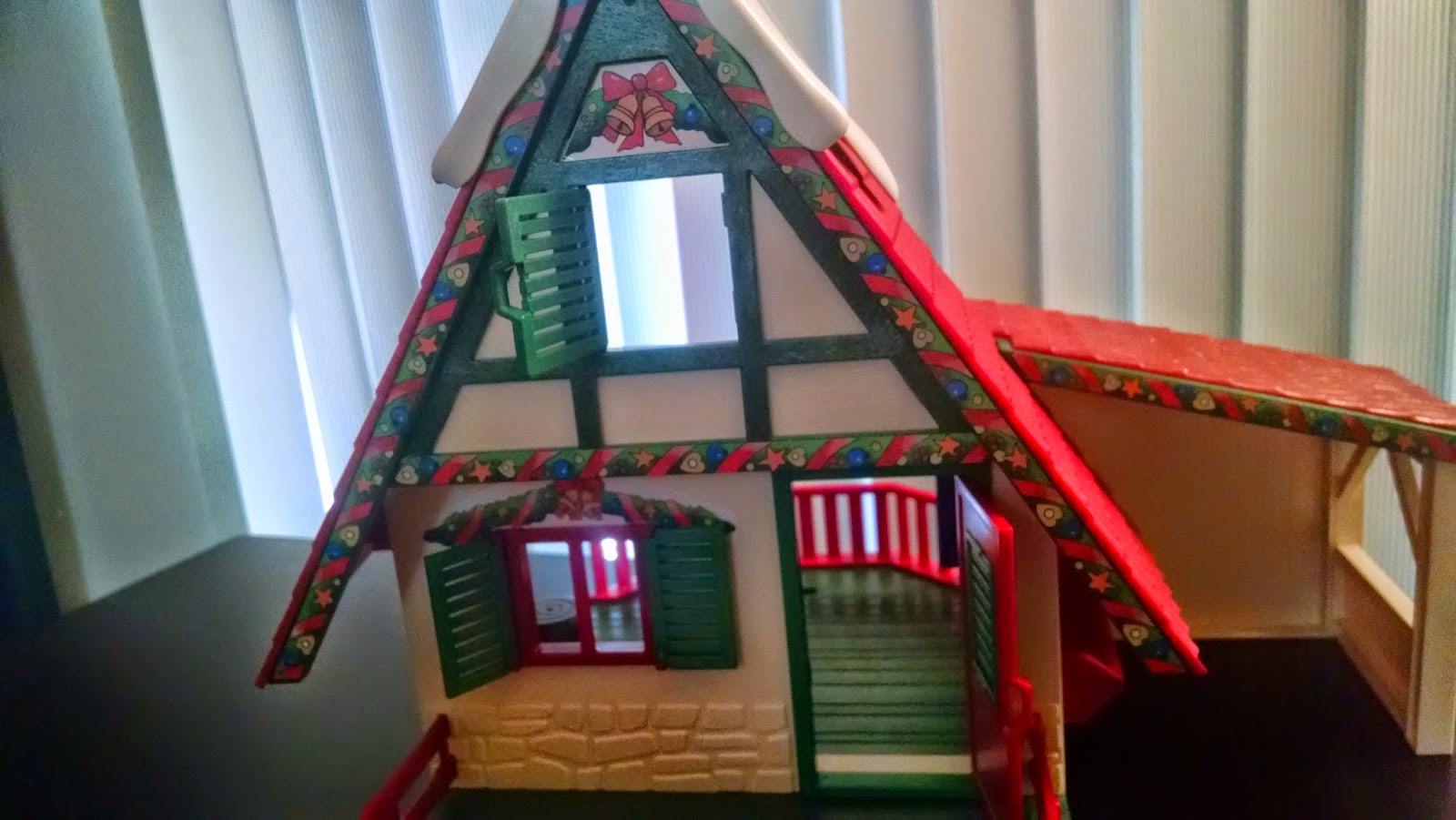 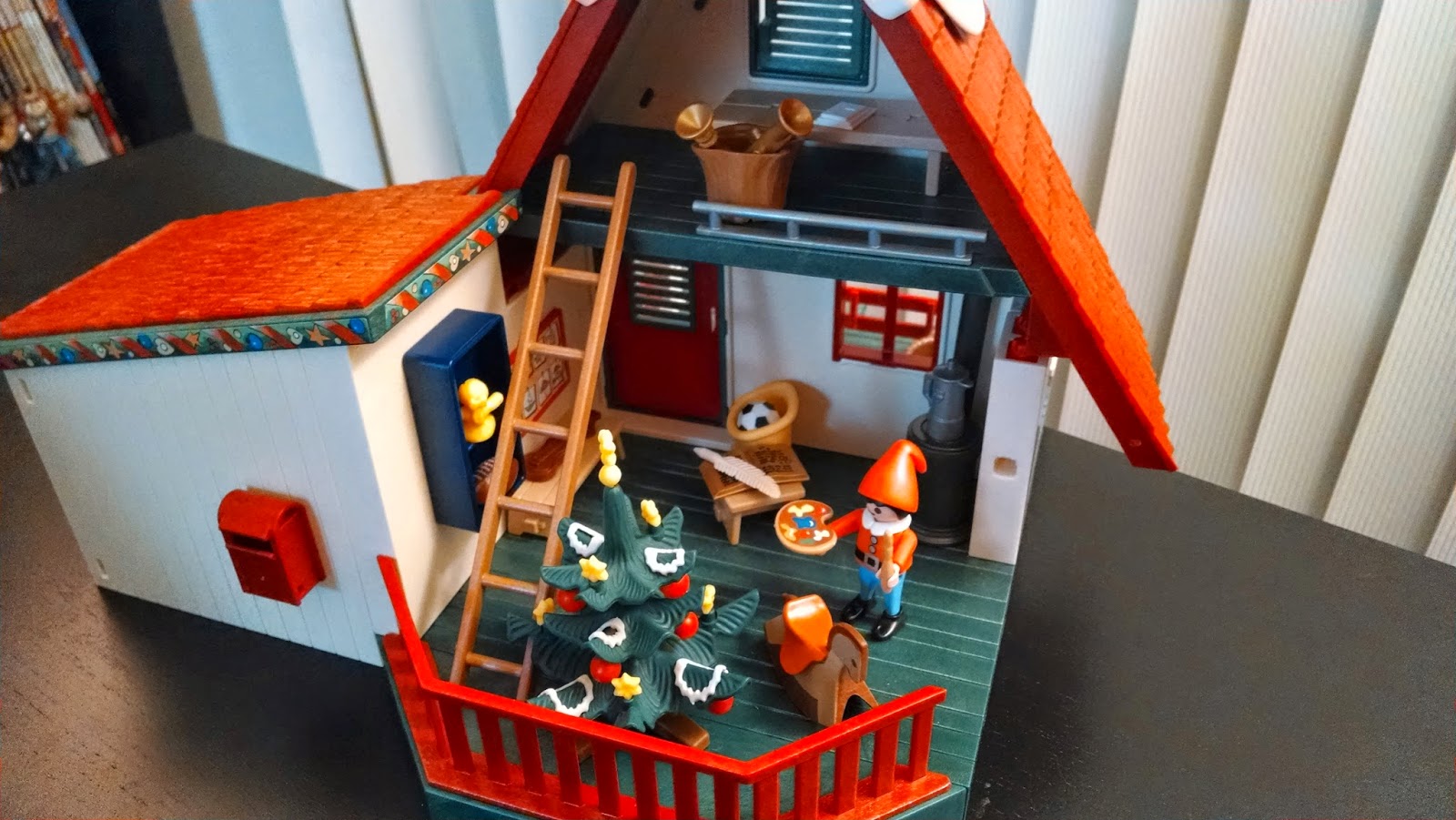 Here's a look from behind. I love the mailbox on the side of the stables - that opens up and comes with some miniature letters. And speaking of accessories.... 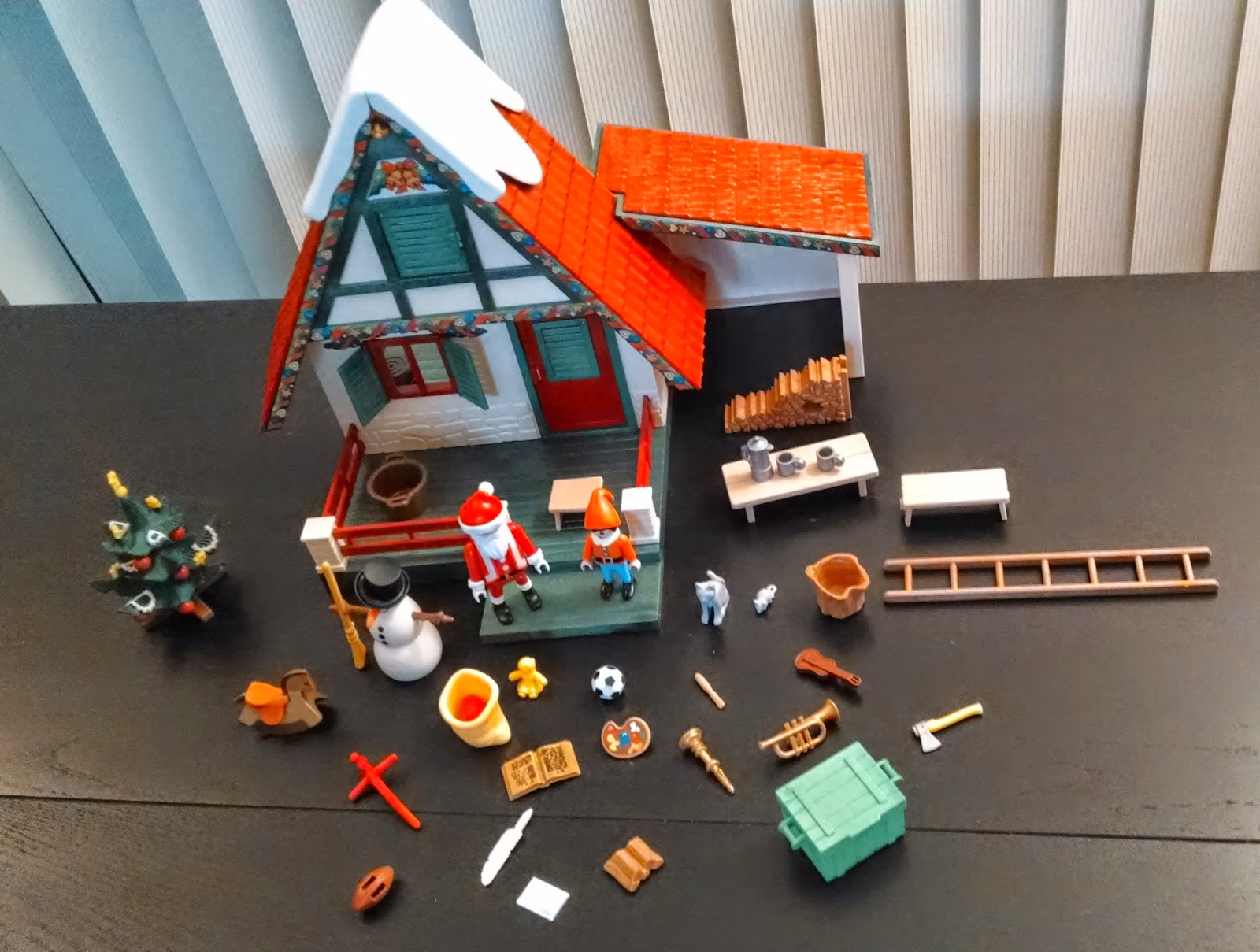 I'm not going to bother trying to list everything. There are three figures, counting the snowman. You also get a decorated Christmas tree, a rocking horse, a ladder, a pile of wood, a cat, and a ton of other things. The quality varies from piece to piece. I really like the cat: Playmobile gives animals a simple neck joint that turns an otherwise boring piece of plastic into something with character.

But my favorite accessory has to be the one with the most potential. I refer, of course, to that hallmark of holiday slashers, the ax: 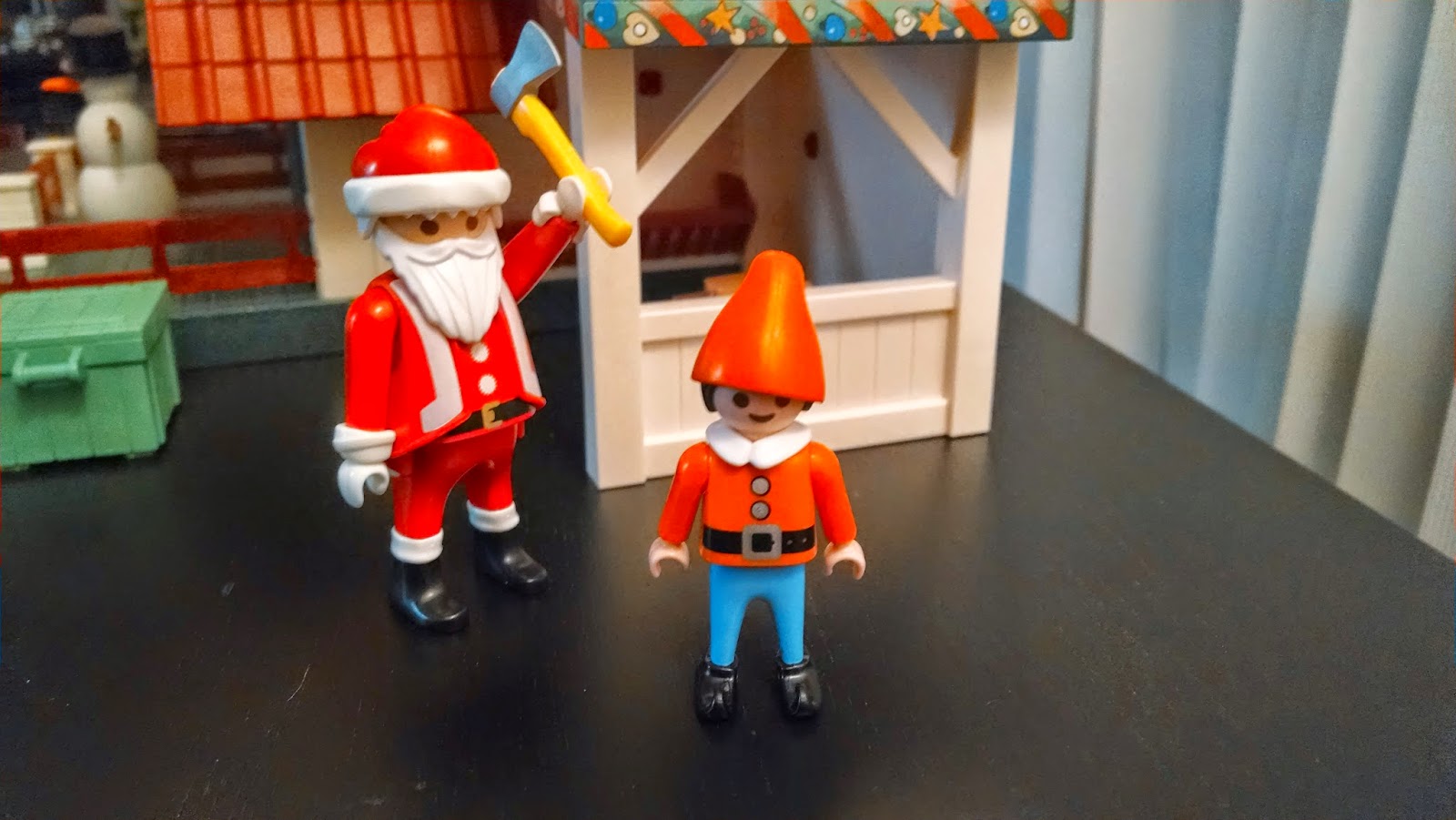 Seriously - if anyone from Playmobile's design team is reading - thank you. 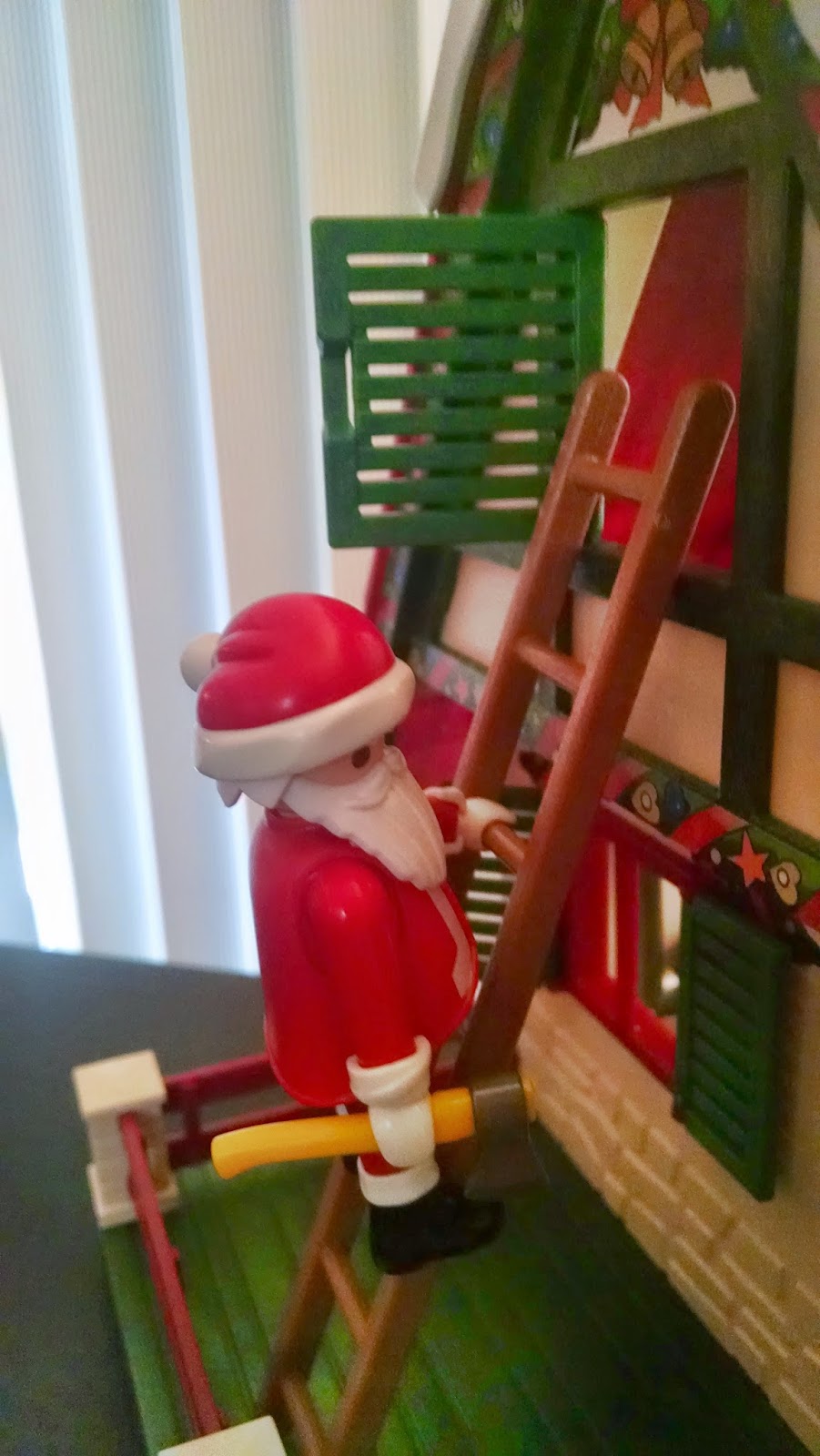 While I love the extras included, there are a few items that feel absent. First, it's odd they included stables but no reindeer (I guess I'll have to dig up the one I got with the sleigh set). I also feel like Mrs. Claus should have been included. I can't imagine those two would have put much of a dent in Playmobile's profit margin. 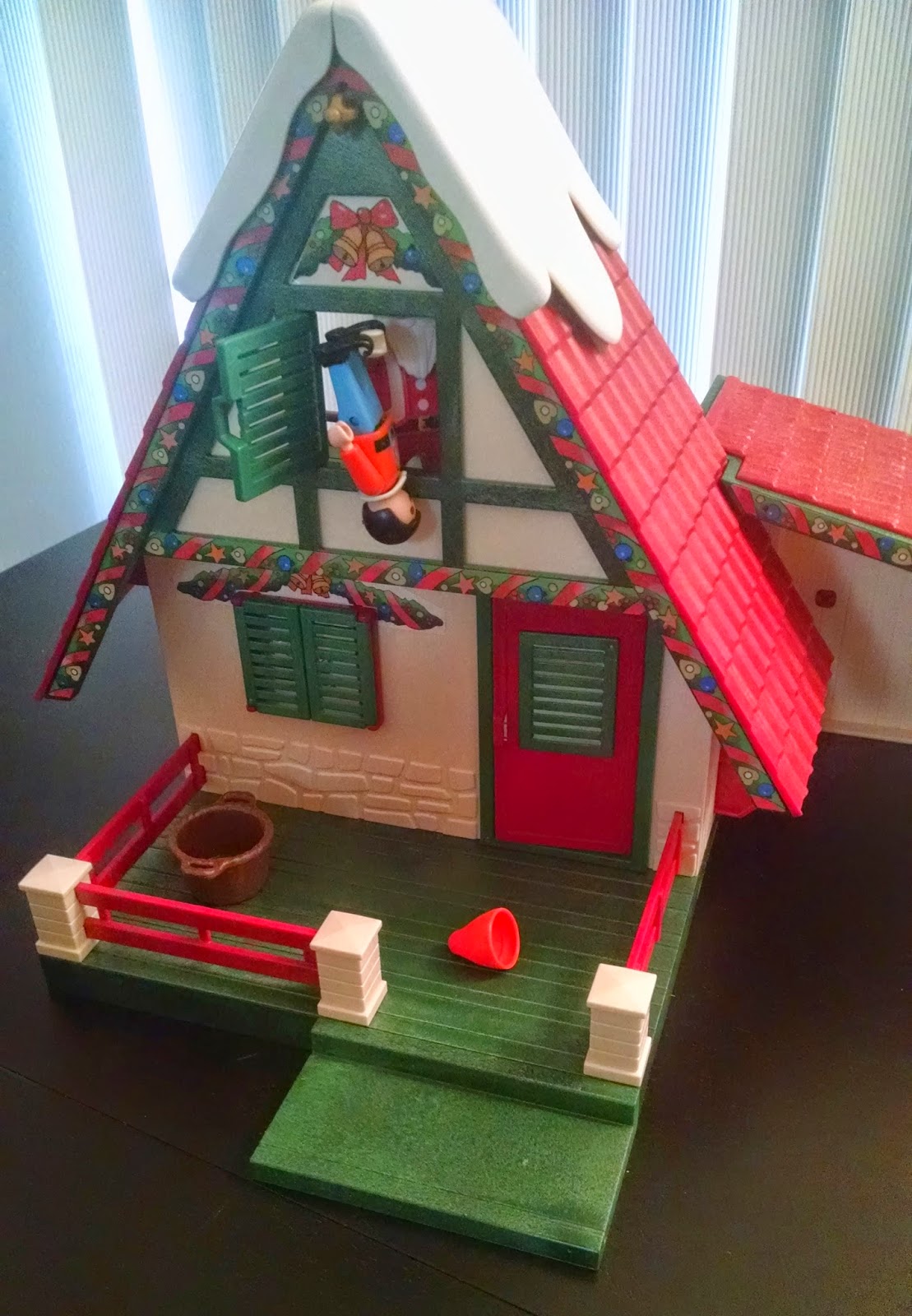 This is a great set, but I'm not sure it's worth its original retail price. $40 seems steep given its dimensions, though the pile of accessories help. Even so, $30 feels more reasonable. I remember seeing it as low as $25 around Christmas last year. I'm glad I waited for clearance though: you can't beat six bucks. 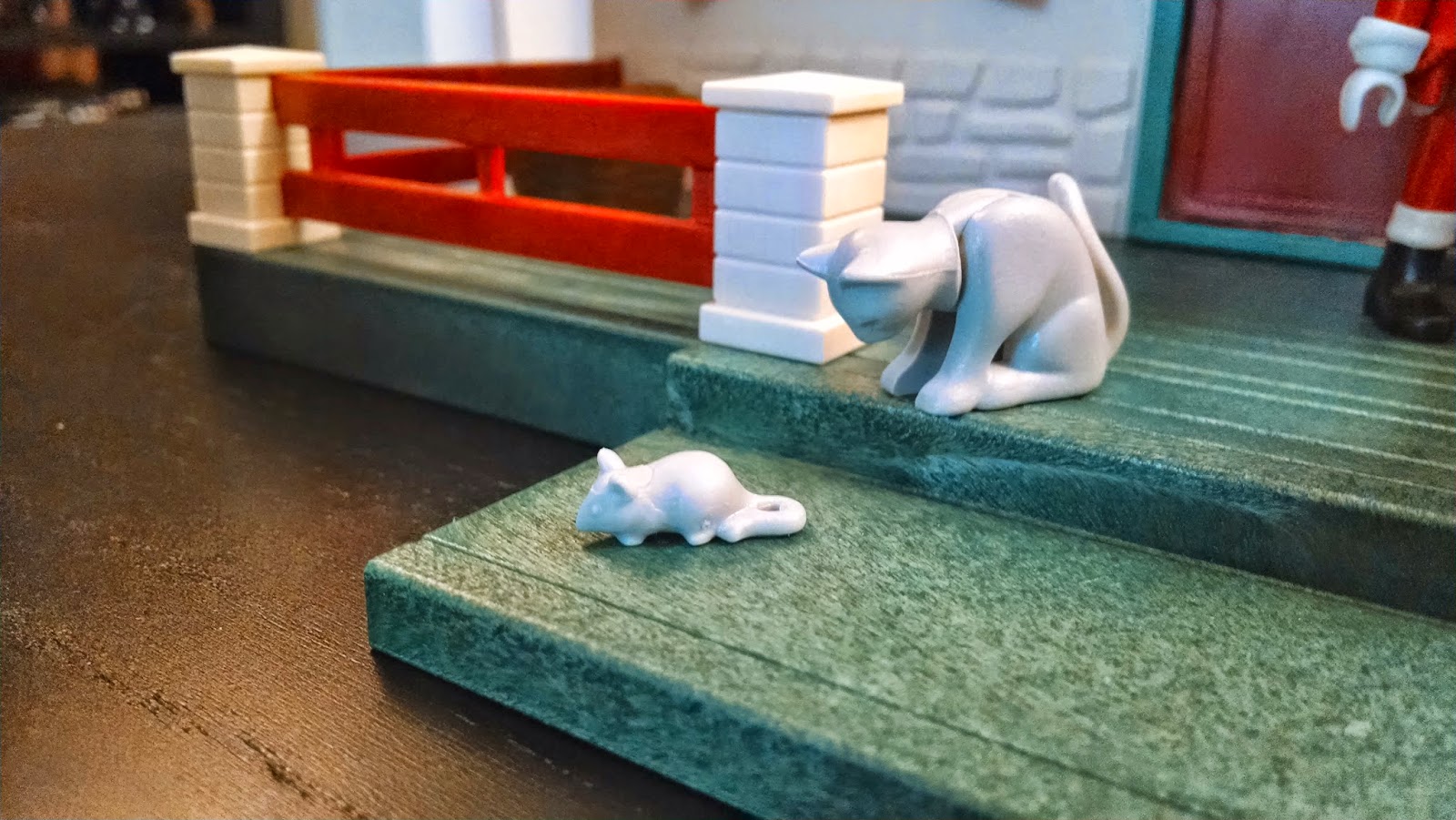