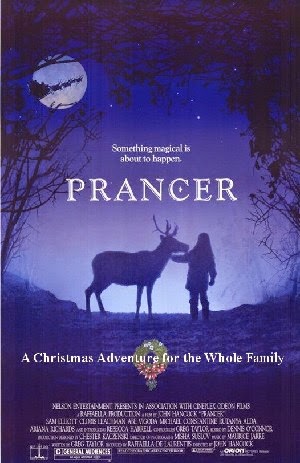 I started watching Prancer with quite a bit of trepidation. Erin said, “Well, think of it this way, it’s at least probably better than any other lost reindeer movie we’ve seen.”

While that’s a low bar, I’m happy to report that Prancer not only passes, that it’s overall a pretty good movie despite a lame ending.

I liked the main character from the very first scene. Jessica is a little girl with a big imagination and a bigger mouth. She’s stubborn and angry. She fights with her friends and with her brother and with her dad. She sticks to her guns and never gives up. I really liked her.

One of the big strengths of this movie is that the dialogue feels strangely real, especially the kids’ dialogue. The child actors are fantastic. Jessica’s dad (Sam Elliot) is having economic troubles and trouble caring for her since her mom died, but their relationship is never schmaltzy. It’s full of things unsaid and words said in frustration, then awkwardly taken back. Her aunt has offered to take her in for a while, until her dad gets on his feet, and this is of course not acceptable to Jessica and she spends a bit of time climbing out of windows and being generally ornery to make her disagreement known.

Her relationship with her brother also felt very real to me. I commented to Erin, “Yes, exactly. You threaten physical violence first at that age, then you calm down enough to try to bribe your sibling. But none of that means you would actually ever hurt each other.” (Yes, I have a brother. No, we no longer settle our problems by throwing things. Mostly.)

So, the plot! After we set up Jessica’s home life, her friends, her school and her family, she sees a wandering reindeer while walking home in the woods after some illicit sledding. She becomes convinced that the reindeer is one of Santa’s. There’s an amazing scene where she basically curses out her best friend for not believing in Santa, because it’s all connected, and if there’s no Santa, what if there’s no God, and then how can Jessica’s mother be in Heaven? When the reindeer turns up again injured, she decides to hide him and take care of “Prancer” until Santa can come pick him up.

Shenanigans ensue, but they don’t get wacky until the movie has earned it. The characters and the town are so grounded, and the build slow and steady, that when eventually there are some farcical scenes - centered around the reindeer’s ability to pull a Batman when your back's turned and vanish - I found them hilarious.

Jessica makes friends with the town's resident witch (you explain her character another way. Just try.) when earning money to buy Prancer some feed, and she spends a bit of time avoiding her father and her aunt. Then she writes a letter to Santa to let him know where to pick up his reindeer. This ends up at the newspaper.

Conveniently, Jessica’s favorite Christmas story is “Yes, Virginia, there is a Santa Claus”.

The local paper runs her letter as a warm human interest story, and then everyone knows about the reindeer. Prancer is captured, Jessica and her brother almost get severely injured trying to get him out, and finally the town comes together to thank Jessica for restoring their faith.

However, at this point hers is shaken. She’s decided it was just a deer all along. Naturally, her father decides to help her release Prancer up on the ridge.

He starts to run, she follows, over the rise and…. the reindeer is gone. Was he one of Santa’s after all? What do you want to believe? Jessica believes.

No, wait. That would have been the awesome ending. Instead, they do that, but add a frickin special-effects Santa sleigh to remove any sense of ambiguity or mystery or thematic closure. Sigh. So close, and yet… so corny.

Overall, though, we both enjoyed this one.
80's Drama Dramedy Highly Recommended Lindsay Movie