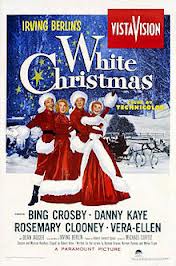 As White Christmas opens, the film proudly announces that it was produced in VistaVision, which research tells me means that it was filmed in a special widescreen process that gave exceptionally high resolution for its time. While the Netflix version that we watched occasionally lost some of that gorgeous resolution, the care and artistry that went into this picture was still very apparent.

The plot is simple on the surface: Burl Ives and Danny Kaye play a pair of friends and showbiz business partners who fall for a pair of sisters who are a singing duo. On that level, it seems similar to Holiday Inn, the classic holiday musical which White Christmas (the song) originated in. But the experience here is miles above the earlier film.

For starters, all the characters are actually characters. The pair of guys are army buddies as well as business partners and that affects the plot throughout. The secondary romantic pair make it their business to get the primary pair together, and it was all done in a way that felt real and sympathetic to me, even while it was also comedic. Furthermore, all the music is great, the patter is clever, the dancing is solid, and the use of color and space on the film is just lovely. Most of the songs featured premiered in this film, except White Christmas, although some of them had originally been written for and dropped from earlier movies or stage musicals. Many of them will sound familiar to you. Irving Berlin was one of the great American songwriters.

There are missteps. For one, the use of awkward dramatic tension to eke a bit more drama out of the plot feels forced. In the middle, the musical numbers, while impressive, become much more presentational and much more dated, and they start to drag down the pace. There’s even one that was very contemporary in 1954, about the use of modern dance on stage, which I found fascinating, but very odd.

White Christmas is sung twice in the movie. I really enjoyed it the first time near the beginning of the movie, and I find it interesting that the film makes explicit one of the theories for the song’s popularity: it was at its height while soldiers were far from home in World War Two. The second time is the big production number at the very end of the film, and I was a little sad that the addition of pretty costumes and unhappy-looking child ballerinas really took away from the impact of the song, at least until the final chorus. By the end, I’ll admit, I got a little choked up.

This is all-around a fun, heartfelt film. Even Erin, who’s not a huge fan of film musicals, enjoyed this one, though not as much as I did. I loved it. I hope you love it too.
50's Classic Comedy Highly Recommended Lindsay Movie Musical