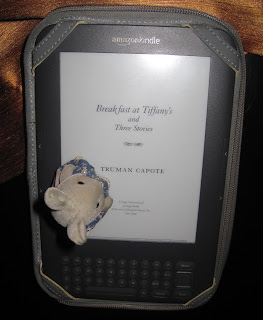 Premise: A ostensibly autobiographical story about an unlikely friendship. The narrator, known only as “Buddy”, describes his memories of celebrating Christmas with his best friend, an older relative whom no one else seems to understand.

This was recommended to me by a friend, and I’m so glad I sought it out. It was just lovely.

‘Buddy’ and the elderly woman called only “my friend” have a lot in common; they are both thought of as strange and they both have a rather whimsical view of the world. The relationship here is touching and sad, you only get little subtle snippets as you follow them through the ritual of making holiday fruitcakes for all the people they like. Not “friends”, but rather shopkeepers and politicians and other public figures; anyone who they feel a connection to or think could use a fruitcake.

The larger family seems to be somewhat low-income, but not poverty-stricken. It’s worse for the two main characters, though, who both rely on what they can scrounge from odd jobs and scrimp from gifts. It’s another connection between the very old and the very young, along with never being far from home and a vivid internal life.

The most important thing about this story, though, is the lovely prose. It was delightful to read the words; I could almost taste the descriptions.

Both melancholy and uplifting, this is a perfect Christmas read.