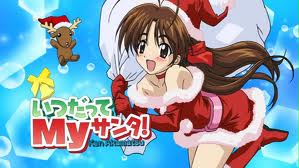 Japan has an incredibly bizarre relationship with Christmas. Without getting too involved in the details, the holiday has been appropriated and transformed into something akin to Valentine's Day. That said, they do seem to understand what Christmas means to Europe and America and the concept of Santa Claus. They understand, but they clearly have no problem reinventing it as something completely different, as they did in the two-part OAV, Itsudatte My Santa! I suppose I should mention the first episode is based on a manga.

Before we go on, I want to make it clear the episodes we saw were dubbed, not subtitled. Setting aside the fact dubbing is usually pretty bad, it injects an element of uncertainty around whether or not what we saw accurately reflects the original. There were plot points and ideas here that seemed absurdly random, which adds to my skepticism. I tried to find some indication online as to whether this was accurate or not, but I had very little luck one way or the other.

Okay, so instead of being a single old, overweight elf, Santa Clauses are some sort of magical race devoted to bringing happiness to good people on Christmas. Oh, and the vast majority of the ones we see are teenage girls.

Got that? I hope so, because we haven't gotten to the weird part yet. The Santa who played the largest role in the episodes was Mai. She was sent to try and make the main character happy.

The main character is a teenage boy named... Santa. You see, he was born on Christmas Eve, so his parents gave him the name. Oh, then they basically abandoned him to do charity work in Africa. At least, I think that's what happened: it didn't make a lot of sense, honestly.

Between his name and having Christmas overshadow his birthday, Santa hates the holiday. Mai appears to try and turn him around. What comes next is bizarre beyond words. After some angst, Mai reminds Santa that the true meaning of Christmas is Jesus's birth. There's some more angst, and then Santa realizes that Mai really is a Santa Claus. His belief in her returns her Santa-powers. This leads to a Sailor-Moon style transformation sequence in which Mai appears naked, turns from brunette to blond, gains bigger breasts and larger hips, as well as gloves and a skimpy Santa suit. Santa (the... human Santa, not the Santa-Santa) travels with her while she delivers gifts all over the world.

In short, this thing is batshit insane. It makes no sense, it contains blatant fan service sequences which exist solely to show Mai's breasts. In the transformation sequences, these inflate like balloons.

It's awful, but kind of hilarious. I don't think I'd suggest sitting through both parts, but it might be worth seeing the first.
00's Action Anime Comedy Erin Snyder Fantasy So Bad It's Good Special Superhero