Batman: The Brave and the Bold: Invasion of the Secret Santas (2008) 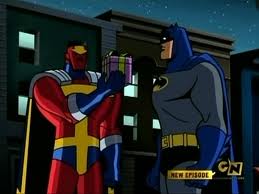 Batman: The Brave and the Bold isn’t just a mouthful to say, it was quite a fun show. I really liked the crazy balance they tried between darker plotlines and zany villains, with both real emotion and corny dialogue. It’s a take on Batman that I really like, casting him as stoic and determined, maybe a little too serious, the guy who all the young heroes look up to, and the older heroes are jealous of.

This episode (after the cold opening with Blue Beetle helping take down Sportsmaster) focuses on Red Tornado’s desire to feel some Christmas spirit. Since I’ve gotten used to the version of Red Tornado in Young Justice, it was a bit surreal to watch this now, but I got into it pretty quickly.

I really liked the subtle musical allusions to A Charlie Brown Christmas at the beginning of the episode. Batman’s flashbacks (now Christmas-related) are a bit on the melodramatic side, but not terrible. Red Tornado and Batman are up against Fun Haus, who seems to be a villain unique to BATB, a maker of evil toys. First he sends a fleet of UFOs to attack the town, demanding Santa. This is cited as a reference to a movie called “Holiday for Neptunians”, whereas it’s actually an allusion to a real movie: “Santa Claus Conquers the Martians.” Then there are evil Santa robots and evil action figures, etc. Red Tornado does a lot of the heavy hero work, while Bats tries to apologize for not having any Christmas spirit to share without actually saying that.

In the end, Tornado gets pretty banged up (that’s sort of par for the character) but he is happy about Christmas, and although Batman doesn’t take a holiday, he’s not having a bad day either. It’s a pretty good episode, not one of the best of the show, but solid.
00's Action Comedy Episode Highly Recommended Lindsay Superhero