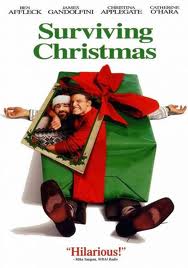 Movies like Surviving Christmas make me reflect on the nature and meaning of awfulness as a quality in and of itself. Too often we revert to an overly simplistic formula, where movies are merely judged on how "good" they are. But things like Surviving Christmas highlight the weakness of such models: they suggest that a movie can be no worse than "not good." Or, to put it another way, nothing below zero.

This isn't to say Surviving Christmas is the worst thing we've ever seen or even the worst this year: it isn't, not by a long shot. There were two or three funny lines in the movie, and that's more than I can say about many comedies reviewed here. And there's nothing technically offensive about this: no gross-out humor or anything.

But that's what makes this movie so interesting from an academic standpoint. I've seen Christmas movies which weren't funny at all. I've seen things that were as boring as watching paint dry. I have a very well-developed sense of "absolute zero." And, of course, I've seen things far, far worse, due to their offensive content. But Surviving Christmas wasn't bad because it offended; it was bad because of its inherent badness.

Philosophy professors should use this movie to teach Platonic forms.

The plot of the movie is ludicrous. In an attempt to simulate a Christmas spent with family, the main character pays a family several hundred thousand dollars to let him stay with them for the holidays. Setting aside the fact that this is not a good premise to build a movie on, Surviving Christmas does a profoundly poor job constructing a movie at all.

The first and most obvious omission is character. Ben Affleck doesn't really play anyone or anything. There's no core to the character, no sense of underlying psychology. This goes beyond a lack of complexity: the character doesn't even feel like a character: just a collection of meaningless lines and actions said and done by Affleck. It's almost as if it was supposed to be farcical, but without the comedy. Most of the other characters were ultimately reactions to Affleck's character, so there wasn't much help there.

So, what made it so bad? Was it the absurdly unrealistic sequences that constituted the entire plot and permeated every character interaction? Was it the aggressively unfunny nature of the scenes? The fact the movie set out to make the viewer uncomfortable... and mostly failed?

In the end, I'm not sure. Maybe badness, like art, is something you have to experience to know. But there's no denying this movie was really, really bad.
Comedy Dark Comedy Erin Snyder Movie Sucks