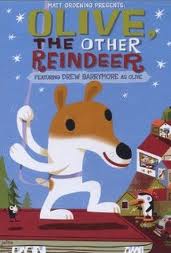 Olive, the Other Reindeer is an animated special produced by Matt Groening, creator of The Simpsons and Futurama, and features Drew Barrymore in the lead role. With that kind of muscle behind it, you'd expect Olive to be pretty good. And you'd be completely and totally wrong.

The design and animation tops the long list of problems plaguing this thing. The majority of the special is done using 2-D animation on 3-D environments. The backgrounds are fine, if underwhelming (think video games from a decade ago). The characters, on the other hand, are astonishingly and unbelievably awful. The special is based on a picture book, which uses highly stylized two-dimensional images that resemble (intentionally) something a kid might draw. The special attempts to recreate this effect and winds up with something resembling what a first-year college student might animate. It's painful to look at. A few years later, this would probably have been done in Flash, and the results would have been far better. As it is, the digitally animated mouths over the flat designs are almost reminiscent of the effect cartoons used to get superimposing live action mouths over drawings. But this actually might be worse.

Don't believe me? Want proof? Here's the first part: see how much you can stomach:


While nothing's as bad as the animation, the writing's pretty uninspired, too. Most of the jokes fall flat, though there are one or two that are worth a chuckle (I did like the bar on the outskirts of the North Pole, for instance).

On the whole, this thing is boring and idiotic. It's an abject failure on pretty much every level, and I wouldn't recommend watching it. If you want to give it a try anyway, it's all on Youtube. Part one is above.
90's CG Comedy Erin Snyder Fantasy Special Sucks