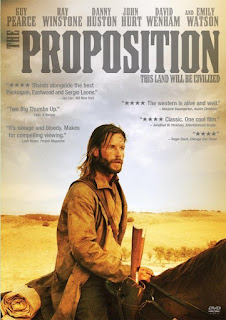 Every now and then we come across a Christmas movie and find ourselves a little ashamed it took us this long to discover it. The longer the blog goes on, the less and less common this phenomenon becomes, but when it does occur, it's all the more embarrassing. This is absolutely one of those times. I assume I must have seen this on numerous lists of movies set at the holidays and most likely glanced at the title, dismissed it as yet another rom-com, and figured we'd get to it eventually.
This is not a romantic comedy. It's a highly realistic, brutally violent western set in Australia. It's beautifully shot, darkly tragic, and thematically driven. In short, we're absolutely recommending this - it's by far the best Christmas western we've seen.
Sorry, I'm getting ahead of myself. We're recommending this with a giant caveat: this isn't an adventure film or a campy comedy or anything you'd call "fun." It reflects the horror of the time, as well as the worst elements humanity has to offer. It's not gratuitous - the movie pulls more punches than it shows - but if you're looking for something light during the holidays, you'll want to look elsewhere.
Let's talk premise and story.
The movie's narrative wanders between several characters - there's no single lead. The "proposition" in the title is made by Morris Stanley, a British captain, to Charlie Burns, a captured outlaw, in the first few minutes of the film. Charlie and his younger brother, Mikey, were just captured, and Captain Stanley tells Charlie that Mikey will hang in nine days, on Christmas, unless Charlie tracks down and kills his older brother, Arthur.
All this is occurring in the aftermath of a grisly crime committed by Arthur's gang that left a family dead. The details of this crime haunt Captain Stanley, as well as his wife, Martha, who was friends with a pregnant woman who was raped and murdered in the aforementioned attack. Morris believes Arthur was responsible for the crime, and he promises Charlie a pardon for him and his younger brother.
During the search, Charlie is speared through the shoulder by a group of aboriginals and is saved by his brother's gang, who brutally murder the spear-thrower and nurse Charlie back to health. Charlie at first lies about why he's returned to their group but eventually reveals the truth.
Arthur is a difficult character to describe. He comes across as intelligent and polite, but prone to outbursts of violence. He's at once likeable and horrible, protective of his family (both literal and adoptive) and sadistic to anyone else. Charlie, meanwhile, is shown to be conflicted between his love of his brother and his growing disgust at his crimes.
Meanwhile, tensions in the town escalate. It turns out Captain Stanley wasn't authorized to make that proposition in the first place, and when word gets around, the townsfolk mistrust him. His superior orders Mikey whipped as punishment. Stanley initially tries to prevent this, going so far as to threaten the townsfolk, but he relents when his wife takes their side. The barbaric punishment leaves Mikey severely wounded, as Stanley feared.
Eventually, Arthur learns about Mikey's imprisonment and brings his gang to break him out. Charlie comes along and helps Mikey out while Arthur executes the guards. But Mikey is already dying. Charlie watches him die and buries him.
By this time, it's Christmas, and Arthur (along with Samuel, the most violent member of his gang) invades the house of Captain Stanley. Arthur subdues and beats the captain, then instructs Samuel to rape the captain's wife in front of him. Charlie arrives and tells Arthur about Mikey's death, but Arthur doesn't react. Without another word, Charlie executes Samuel and shoots Arthur, who staggers outside.
Charlie, in a daze, mutters that he wants to be with his brother, and follows Arthur out to find him staring at the wilderness.
I don't imagine any of that made much sense. Like many westerns, this is fairly light on dialogue, and what is there is mainly present to convey character and theme. Motivation is rarely explained; instead, you're left to cobble together some understanding of who these characters are and why they're acting the way they're acting.

And after one viewing, I'd be lying if I said I got it all. That goes doubly for theme. My knowledge of aboriginal culture and Australian history is severely limited, so there are massive aspects of this film I can't adequately explain. I'm fairly certain that the spiritual beliefs of indigenous people were being heavily alluded to, but I won't embarrass myself by failing to explain how.
Instead, I'll say a little about Christmas. Since this is set in Australia, Christmas is of course taking place in the middle of summer, rather than winter. I interpreted this as a representation of how backward and broken the European mindset felt. At the beginning of the movie, Captain Stanley vows to civilize the area, a goal that quickly feels perversely ironic. Nothing about the colonizers' actions feels civilized (think Heart of Darkness and Lord of the Flies). They are barbaric, cruel, and bloodthirsty, and yet they act surprised when confronted with the consequences of their own actions. Their worldview is upside-down, and yet they continue to pretend their choices are somehow rational or fair. Celebrating a traditional British Christmas in the midst of all this feels like a symbol of this absurdity.
That was my interpretation, anyway. I suppose it just as easily could have been another case of using the holidays as a contrast to violence.
Regardless of why, the movie is incredibly impactful. I'm barely scratching the surface - the shots of Australia's wilderness are stunning, and the score is amazing in its own right. Meanwhile, the cast is fantastic.
Again, this isn't a family film, and I wouldn't suggest it to anyone looking for something relaxing. But if you're able to stomach something heavy and don't mind being challenged, this would make one hell of a great addition to your Christmas watchlist.
00's Action Drama Erin Snyder Highly Recommended Movie Western