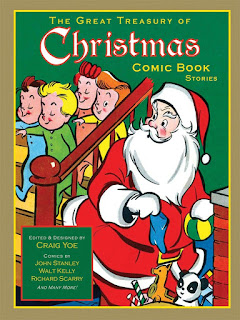 I stumbled across this ahead of the season this year, and I'm glad I did. Now I can warn you. It's not bad for what it is, but it is not for "children of all ages."

This book is for:

It's a fairly wide-ranging collection, but none of it is great. A few of the stories are not bad: one about some polar bears who want to help Santa but keep messing up is fine. One about Santa visiting an animal Christmas party where there is a Santa costume contest is pretty cute. Another stars a gnome and the Easter Bunny and they create ice cream snow to save a magic weather machine. It doesn't make much more sense in context, but it's sweet and fun.

There's a very compressed but adequate adaptation of A Christmas Carol, but there are tons of good adaptations out there. Also an okay illustrated version of 'Twas the Night Before Christmas.

However, a lot of the stories are either extremely surreal, weirdly dated, or both.

Sometimes the weirdness is at least interesting - I don't think the story of a bunch of elves that look like naked toddlers creating Santa's suit out of a friendly giant's coat is actually good, but it is bizarre enough to be intriguing. More often they are disjointed stories where the story is haphazard or nonexistent and doesn't seem to have a point.

There's one where the punchline is about army surplus rockets - probably made more sense in 1947. I believe the comic historians when they tell me "Lil' Tomboy" was important at the time, but her whole deal seems like it would need too much explanation for a modern kid to easily enjoy.

There's one that's almost good about a tiny deer who wants to pull a sleigh, but it's marred by the plot hinging on a toy for a "lame boy" who we never actually see or find out more about. Awkward.

Most of the stories fall in this mediocre-to-boring middle ground, but a few are just plain bad. There's a parody of 'Twas the Night Before Christmas starring a character called "Atomic Mouse." The writing (and forced rhyming) on that one is painful. There are a couple that follow kids on a "maybe it was a dream" adventures, but they're full of baffling plot twists and dated character tropes and situations.

There's a surprisingly violent story set in Toyland where the resolution makes no sense. And there's an actual illustrated bit of the Bible at the end, which is mostly hilarious because of all the blond white people.

Fans of classic cartooning and vintage illustration could probably find a lot to like in the art here - they even maintain original printing and coloring errors. But no one should read this for the writing.