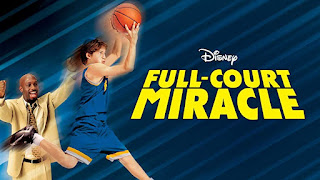 Full-Court Miracle is a 2003 Hanukkah movie produced for The Disney Channel loosely inspired by a true story of a man whose life sounds like it was a hell of a lot more interesting and inspiring than what I just watched.

I'll get to the plot in a minute, but first I do want to call attention to one thing legitimately noteworthy about this movie. We've watched and reviewed a handful of movies that were ostensibly about Hanukkah before, but every one of them was really a movie about being Jewish at Christmas. There are some specials and episodes of TV shows that break that mold, but this is the first movie I remember seeing which was unambiguously about Hanukkah itself.

I'm still waiting on a Hanukkah movie that's, you know, good, but I view this as a step in the right direction.

The movie's main character is Alex Schlotsky, a student at a Jewish private high school. Alex is obsessed with basketball, despite the fact his team consistently loses. For reasons I won't go into, he and his friends conclude that Lamont Carr, a former professional player who's currently living in his van, is the ghost of Judah Macabee. Naturally, they pay him to coach them.

They've only got a few weeks until a massive tournament, so Lamont has to act fast. Making matters more difficult are the forces working against this divine miracle. Coincidentally enough, the movie opts to represent these forces as women. First, there's Alex's mom, who doesn't get this whole basketball thing and instead wants to strongarm her son into following in her footsteps and becoming a doctor. There's also a nosy principal working to undermine Alex's plans.

To be fair, both the mom and principal come around by the end. Alex's mom, in particular, is given a lengthy scene in which she talks everything out with the kid and they finally understand each other. Still, it's kind of disturbing two of the movie's three significant female characters are the antagonists. The third female character is Alex's friend, Julie, who's treated like a love interest, but that storyline goes nowhere. You could basically cut her entirely from the movie, and it wouldn't change the story.

Despite the efforts of women to prevent the boys from playing basketball, a bunch of male characters conspire to get Lamont hired at the school on a temporary basis. Two days before the tournament, Lamont is given a chance to play professionally again, and he jumps at the opportunity. Alex and the others feel betrayed for some reason, despite the fact he's already turned them into competent players.

The day of the tournament arrives, and they make it to the final, as do their rivals, a team of taller teens who have appeared several times to make fun of them. During the final game, there's a massive storm, and it knocks out the power to the gym. There are five minutes on the clock, but only enough fuel in the emergency generator to last two. And of course, the opposing team is up.

Because they're evil, the opposing team calls time out to burn through the fuel. But... yeah, we're actually... we're doing this.

Miraculously, the generator fuel is able to last the rest of the game, giving the plucky underdogs just enough time to win. Also, Lamont shows up, because Alex's mom gets him a full-time job at the school, which is better for him, anyway.

There's a lot I feel I should say here. First, given all the disease, injustice, and pain in the world, I'm not sure putting His divine finger on the scale determining the outcome of a high school basketball game is really the best use of God's time and energy. And in case there's any doubt, the movie makes it crystal clear the lightning storm and fuel-miracle are manifestations of God's will.

Beyond that, the movie's portrayal of Judaism leans heavily on stereotypes. The number of throwaway lines referencing Hanukkah, the Macabees, or Jewish cooking feels excessive. The writers seem to think mentioning a yarmulke is somehow inherently funny.

There was also something uncomfortable about the dynamics of the game at the end. We know Alex's parents are well off - his mother is a doctor, and his father is in real estate. Likewise, while it's never stated outright, the movie implies the other students come from money, as well. And while they're Jewish, they're also white. So, when we're supposed to root for them in a game against a diverse group of kids, it gets kind of uncomfortable. Don't the players on the other team have dreams, too?

The movie itself is bad, but not awful. The jokes are tired but not offensive, the pacing is slow but not glacial, and production values are TV quality but not abysmal. The cast is fine overall - I thought Linda Kash and Shelia McCarthy did good work as the mom and principal. Richard T. Jones was good as Carr, too. None of them were able to salvage the movie, but I can't say they didn't try.

It's not surprising this didn't work - again, it's a Disney Channel original movie from the early 2000s. Still, I refuse to give up my quest to find a decent Hanukkah movie. There has to be one out there somewhere.