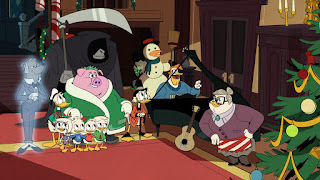 The worst thing I can say about the DuckTales reboot is that nothing about the show feels particularly revolutionary. Obviously, there's no reason it should, but it's the only thing that differentiates it from any of the best animated shows of all time. It's not subversive and dark like Batman TAS; it's not shocking and cerebral like Mystery Inc.; it's not progressive like Steven Universe or as profoundly optimistic as Phineas and Ferb. It's just... nearly perfect in every way imaginable.

I apologize for being so harsh.

So is this just the level of quality we should expect going forward? If so, I'm not complaining - the DuckTales reboot is fantastic, and I'm loving every minute. It's just... I'm kind of bewildered. Given the significance of the IP coupled with the money thrown at this (I mean, just look at the voice cast), shouldn't this have been shredded through meddling studio notes or something? How the hell did this series not only retain the spirit of the original but also manage to update the story using modern serialized structure?

I guess it doesn't really matter how this happened, just that it happened. And the results are up there with some of the best animated TV out there right now. Not that it's a short list: like I said a moment ago, maybe this is what we expect from now on.

At any rate, the season two Christmas episode, Last Christmas, is both a fantastic demonstration of how much thought and depth were poured into this series and a really good holiday special in its own right. That said, the story is ripe with spoilers for the first season, so if you like ducks, tales, or just damn good storytelling, stop reading, head over to Disney+, and start watching. Actually, belay that suggestion: you'll want to use this guide to watch the series in its intended order.

The Christmas episode opens with a holiday version of the DuckTales theme, and they didn't phone this in. They didn't just change the lyrics or add bells - they redid it as a swinging jazz number, complete with a singer reminiscent of Bing Crosby.

As soon as this ends, we cut to what might be one of the better red herrings I've seen. We follow Scrooge as he briefly interacts with his family, who are getting ready to celebrate the holidays. Scrooge, mirroring his namesake, expresses contempt for everything Christmas, even uttering (much to Webby's exuberance) a legendary "Bah, humbug." Over the course of a few minutes, we're treated to a barrage of hilarious jokes and obscure Easter Eggs. Finally, after destroying an animatronic Santa Claus, Scrooge storms off to bed.

We then cut to Dewey, who's sitting alone in his room staring at a picture of his lost mother, Della. After refusing Donald's invitation to join the others in celebration, Dewey notices an eerie green light in Scrooge's window. He goes to Scrooge's room to investigate, and he finds the spirits of Christmas Past, Present, and Future, cheering his uncle on while he chugs a pitcher of eggnog.

I should add that while these aren't precisely the versions of the spirits from Mickey's Christmas Carol, they're damn close and clearly intended as callbacks. After some brief confusion, Dewey is told the truth: aside from some unexplained hostility with Saint Nicholas, Scrooge has no problem with Christmas whatsoever. He just uses that as a ruse to honor an old tradition and hang out with his old friends every year on a time-traveling adventure.

Despite being told to stay behind, Dewey stows away in Future's robes, which is mainly a problem when he falls out. Dewey, of course, is hoping to finally meet his mother, a woman he only knows through photographs and stories.

But I'm getting ahead of myself. Before we learn about Dewey's adventures, we follow Scrooge and the spirits back to the first annual McDuck Christmas party. The spirits of Present and Future have fun, but Scrooge becomes depressed. When he suggests going back, Past becomes agitated and convinces him to give him another chance. He then takes Scrooge back further, to his first holiday in Duckburg, when Scrooge was living in a tent in the woods.

When Scrooge decides he'd still rather be with his family, the spirit refuses, explaining that Scrooge was the only one they'd ever visited who didn't abandon them. Now that Scrooge has an extended family living with him, the spirit believes he'll move on, as well. To keep him from doing this, he's decided to trap Scrooge in a time loop with him in the past, reliving the same Christmas over and over again. After a brief duel, Scrooge tricks the spirit, steals his time-traveling umbrella, and vanishes.

At this point, we cut back to Dewey, who fell off of Christmas Future and landed in the duck equivalent of the '90s. He finds Donald, who's now a flannel-wearing teenager practicing his guitar. Of course, the one he's really looking for is Della, but she's outside setting traps for Santa Claus. Dewey pretends to be a long-lost relative and enlists Donald's help in tracking down Della. They go searching for her but come across a wendigo, instead.

The temporarily escape the beast but end up snared in one of Della's traps, giving Dewey a chance to meet his mother, albeit as a teenager. He helps her and Donald resolve a fight and in doing so realizes he owes his own family an apology. By this time, the wendigo has caught up with them, but - after pausing to learn the beast is after Scrooge for some reason - they defeat it fairly easily and drag it back to the mansion.

By this time, Donald and Della have figured out Dewey's from the future, but they stop him from telling them anything more. Scrooge, on his way back to the present with the spirits of Christmas Future and Present, spots Dewey and investigates. He arrives in time to rescue Dewey when the wendigo breaks free and is about to attack.

This also reveals that the wendigo was the spirit of Christmas Past, transformed into a monster by isolation and obsession. Scrooge returns the umbrella and makes amends, before everyone - spirits included - return to the present to celebrate the holidays.

The episode ends with a cutaway to the surface of the moon, where Della's still at work trying to get back to her family.

I realize that probably sounds like a mess in synopsis form, but the episode itself is a pleasure to watch. The resolution between Scrooge and Past is surprisingly touching, even if the premise feels absurd. But that's kind of the show - and series - in an eggshell: it embraces the objectively ridiculous elements and uses them to tell solid stories. The jokes are hilarious, but there's still real heart.

As for the Christmas aspects, I'm not sure I could ask for more in a half-hour program. This takes the time-travel from A Christmas Carol and reworks it into a meta-narrative about both the original AND the classic Disney adaptation. And it does all this without simply rehashing the plot or premise of Dicken's story. You still get a message about growth and self-improvement, but it's tied to the bonds of family and friendship rather than generic adherence to "Christmas" as an institution.

The episode, in short, does everything you could possibly ask it to: it honors the past by celebrating its characters' histories, it presents itself as a wonderful standalone holiday special, and its sets up the series's future by establishing character relationships and teasing where the story's headed.

If you haven't already been watching this, I honestly hope you stopped reading a few paragraphs ago and started the series. This is fantastic television, and I can't recommend it highly enough. Lindsay and I stumbled across this episode in the course of catching up, but I'm sure we'll revisit this episode in particular in Christmases yet to come.
2018 A Christmas Carol Comedy Episode Erin Snyder Fantasy Highly Recommended