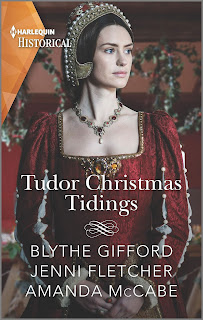 This is a new book, but I did not get a copy through NetGalley for review, because Harlequin's standards for reviewers are apparently higher than this website.

Three holiday-themed historical romance novellas. I decided to give this a try when I saw it was available through my local library. I've been more interested in romance this year than previously, but my time could probably have been better spent.

Christmas at Court by Blythe Gifford

I did not expect this to go into history as fast and hard as it did. The novella provided very little background information about the politics of the time, but the plot hinged on those same politics. Eventually, I was driven, ashamed, to Wikipedia to refresh my knowledge of Richard III and Henry Tudor.

The main characters in this one (Alice and John) are heirs to important noble houses, and they are semi-secretly betrothed by their parents to seal an alliance between their families in the movement to overthrow Richard III. The story takes place over three successive Christmases as the political situation changes around them.

Unfortunately, this story was hampered by unconvincing lust-at-first-sight and far too much... how shall I put this... faffing about. Alice and John are in love, now they aren't, now Alice doesn't trust John's family, now John doesn't trust Alice, now they're back to trusting each other, now they aren't. It just felt like running in circles, and I never cared about what was happening.

Secrets of the Queen's Lady by Jenni Fletcher

This story, set in a time I know a bit better (Henry VIII), had better characters and a more compelling romance.

Lady Philippa is a recent widow who is struggling to recover from how terrible her marriage was when she reconnects at a Christmas celebration with a younger man she met in passing years before. Her emotional trauma is compelling, and her occasionally dumb decisions (I simply must push this loving man who I desire away for his own good!) are at least understandable given her backstory.

Her suitor Sir Christopher, on the other hand, is a much less complex character. His insistence that his obsession with her dates back to their first brief meeting seems a bit too far fetched. The romance was much less important than Philippa finding her own self and strength.

His Mistletoe Lady by Amanda McCabe

The title for this one is weird. There is mistletoe, but it doesn't play a huge role.

Catherine's father has been imprisoned for acting against the crown, and Catherine and her mother go to court at Christmas to see what can be done. Catherine is immediately taken with the courtier Diego de Vasquez (just arrived from Spain), and the feeling is mutual.

Oh, if only her father weren't a traitor, and if only Diego weren't surely mourning the death of his wife! Good news, Catherine, neither of those things are true. Your father is secretly an informant for the crown, and Diego didn't love his dead wife.

The build on the romance for this one isn't badly done, but I kept rolling my eyes at the fact that literally every apparent problem in the path of the happy couple wasn't actually a problem. In the end, they've foiled a plot and plan to live in Spain (Catherine's mother is Spanish as well). Given that they're Catholic and the ruler they just worked so hard for is Mary I, it's probably just as well for them to get out of Britain before her short reign ends.

None of these stories were bad, although the first was the most boring. However, none of them were all that great either. This is just another interchangeable bit of romantic fluff to pass the time.