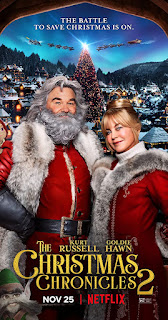 I'm going to try and rate this movie on its own merits, and not dwell longer than necessary on how it holds up against its predecessor. The original was a delightful surprise, a movie that managed to balance its absurd fantasy elements with a relatively grounded story about siblings coming to terms with the loss of a parent. It hit the right notes, maintained the right tone, and worked in ways these movies almost never work.
The sequel... doesn't.

To be fair, it's not really trying. Instead, this takes the characters from the first and uses them in a conventional fantasy-adventure kid's movie. Tonally, this is closer to Santa Claus: The Movie or maybe the third Tim Allen Santa Clause flick than it is to the first Chronicles.
And rating on that scale, it's pretty solid compared to most of its peers. But make no mistake: this hits its mark because it aims lower than part one. Much lower.
The frame story this time centers on Kate, returning from the first installment and now a teenager. Her older brother makes an appearance, as well, but it's really more a cameo - I guess they decided he'd mostly aged out of the story. Instead, we're introduced to Jack, the young son of Kate's mom's new boyfriend. The movie does lean fully into the obvious cliché of having Kate hate the new guy; she's openly resentful her dad's getting replaced.
Belsnickel, here reimagined as a mischievous elf who transformed into a human due to a curse, takes advantage of this situation and maroons her and Jack just outside the North Pole in order to sneak into Santa's workshop by hanging from his sleigh. With the help of the Yule Cat, he sets out to steal the Star of Bethlehem so he can start his own workshop in the South Pole, only to have the magical artifact break in the process.
And... this is one of those times I know I should probably explain what I'm talking about, but I really don't feel like it.
At any rate, Santa takes Kate to get a replacement star from the wood elves, while Mrs. Claus enlists Jack's help acquiring an antidote to the magical drug Belsnickel used to turn the elves rabid while she also works to heal Dasher after she was mauled by the Yule Cat.
Okay, I definitely made the right choice not explaining any of that.
Belsnickel uses a weaponized time machine to briefly sideline Santa in 1990, which gives Kate a chance to see her father as a kid and Santa a chance to do a big musical number. The plot, however, is entirely unaffected. Meanwhile, in the present, Jack uses an exploding gingerbread man to beat the Yule Cat, then fights off some elves with an enchanted Nerf gun.
The movie resolves somewhat predictably with the kids saving Christmas and Belsnickel reconciling with the Clauses and transforming back into the world's most unintentionally creepy CG elf.
Like I said at the start, the complication with this movie is less its own quality than the drop in quality between installments. On its own, there's still a lot to appreciate here.
First, this leans into both the modern fantasy elements of its premise and the mythic and historical background. Santa Claus is revealed to have started out as Saint Nicholas, complete with a truncated backstory drawn from the historical figure. The Yule Cat is a nice touch, too, though given how much exposure that folktale has gotten recently, I wouldn't exactly call it a "deep cut." I also liked some decisions made around Mrs. Claus, here presented as a brewer of magical elixirs. I don't recall them dropping a name for the character, but I think they were implying she might be Befana.
The forest elves were a bit too cute for their own good (same with the Christmas elves), but I still appreciate them splitting the difference between fantasy and holiday elves. There were some additional fantasy references, too (the most obvious being a map clearly inspired by Tolkien). Similarly, Russell's Claus doubles down on resembling Odin. On paper, this is my favorite approach to the concept (I did once write a novel to that effect).
The worldbuilding in this is pretty good, or at least it conforms to my tastes (that said, I could have done without the elf movie theater, and name-dropping "the star of Bethlehem" was obnoxious). I also liked Belsnickel, at least in human form. They cast Julian Dennison (from Hunt for the Wilderpeople and Deadpool 2), and he had a lot of fun in the role. I think his character would have been more effective if they'd made him the renegade son of Santa, rather than a rogue elf (there were a few moments that seemed to imply this, making me suspect it might have been the plan in some earlier draft of the script), but he still worked well.
The stuff that didn't work was... well... basically everything else. The elves were my least favorite aspect of part one, so I wasn't overjoyed to see their role greatly expanded. Even when they weren't around, the movie felt aggressively cartoonish in a way the first did not. The sets were always too clean and bright, and the overall tone lacked tension. The first sold the idea the kids had gone through real pain when they lost their dad. Here, they're just kind of playing, as if the movie's worried it might scare or upset someone.
I know, I know: this is for kids. But there are ways to make kids' entertainment impactful, and this doesn't try. The character arcs are all a little too easy and way too obvious. Nothing feels earned, and nothing really has much of a cost. After part one, I wanted more.
This isn't a bad movie, at least not as far as its genre goes, but that genre sets a low bar. The original Christmas Chronicles was something special - this one just averages out to "okay."
Erin Snyder Fantasy Movie