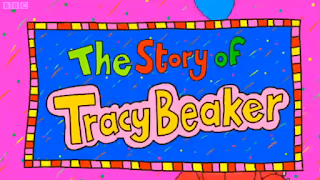 Wow, we are running into some weird running themes within Christmas in July. This is the second children’s show to feature kid(s) in foster care (also see It’s Punky Brewster) and the second to feature animated internal narration from the main character (also see Lizzie McGuire).

The Story of Tracy Beaker is a BBC series - based on the book of the same name - that follows a bunch of kids in a group home. And for once, the premise of the series actually has something to do with the Christmas plot.

In this episode, two of the boys in the house (“Lol” and “Bouncer,” because the British love their nicknames) receive word that their aunt, who they normally see only over Christmas, is willing to take them permanently. Lol thinks this is great news, Bouncer isn’t so sure.

After a conversation about how Christmas is commonly celebrated in the group home (the kids call the place “The Dumping Ground,” but I cannot bring myself to repeat that), Tracy decides to enlist everyone’s help in throwing a surprise Christmas party as a send off for Bouncer. The episode aired in August, and it’s some sort of unspecified sunny season outside the house, so I feel justified calling this Christmas in July.

The rest of the fourteen-minute episode is made up of setups that don’t pay off. One kid steals a fir tree, and there’s a line about a house worker getting a complaint from a neighbor, but there isn’t any comeuppance, I guess because Christmas? Two girls combine a series of unlikely ingredients into a “pudding,” but we never actually see a character try to eat it.

Of course because it’s the middle of the season, they aren’t changing up the cast, and Lol and Bouncer’s aunt decides maybe it isn’t the best time to adopt them after all. At least everyone got a Christmas party?

This wasn’t awful so much as it was impressively boring, considering how short it was. The humor was fairly broad and we didn’t find it funny. The writing and the sets couldn't seem to decide whether to portray the kids’ situation as positive or negative, settling on surreal. The animated interstitials were poorly drawn, but in a low-budget way rather than a cute-little-kid way.

The show did very well and spawned two sequels, though. So either this wasn’t enough of a representative sample to understand the show, or we really need to find a way to send the British better children’s television.