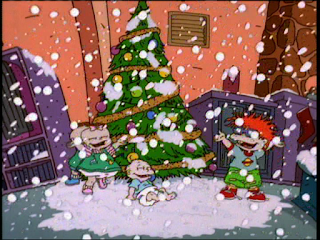 I know that kids in most cartoon shows never age, but that convention seems especially creepy when you’re talking about infants never growing old enough to try to speak, even though they have experienced (at least once) both Christmas and summer.

This is technically a Christmas-in-August, but it counts for our purposes. Christmas in July tropes include an off-season photo opportunity and characters who believe it’s Christmas when it isn’t.

Incidentally, the first half of the episode isn’t Christmas, just an example of unfunny children’s television in which Angelica gets in trouble for pretending to be an adult on the phone.

In “Let It Snow,” the babies see Tommy’s Grandpa decorating a Christmas tree. Grandpa explains to the adults about taking a holiday photo in time to have cards done, and some obvious foreshadowing is laid around a bag of old toys intended for donation.

The babies think the presence of the tree must mean it’s Christmas, but there aren’t any presents. Some extremely quick leaps of logic later, and they’ve decided that Santa must have forgotten the holiday, and the only way to remind him is to make it snow.

Naturally they write a letter to the weatherman. Now, this sounds like a cute conceit, but I don’t think I’m adequately conveying the tedium of watching this episode. Actual kids can be cute when they’re doing something like making up letters and pretending to write. I’m not sure why we were expected to find animated babies drawn and voiced by adults cute or funny while doing the same.

I mean, there’s already been some heavy-handed exposition about laundry soap; we’re just waiting for the end at this point.

The babies finally manage to accomplish their second or third (I don’t recall) snow-making plan: turn on the AC. The AC sucks up and spits out an unlikely amount of spilled soap from the laundry room, and right on cue Grandpa comes down dressed as Santa and spills the old toys where the kids can grab and play with them.

I guess this episode is notable in the scope of Christmas in July media because the characters who honestly believe that it’s Christmas never learn differently, unlike other examples we’ve seen.

It certainly isn’t notable for anything else.
90's Christmas in July Episode Lindsay Sucks