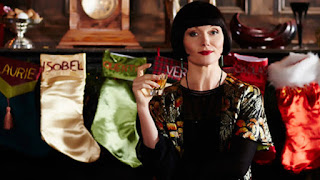 I’ve had this on my radar for a while, but this is actually a Christmas Murder Mystery in July! The series is filmed and set in Australia, and while Australia celebrates Christmas in December like the northern hemisphere, many people also celebrate in July, when it’s actually cold out.

This story is not directly based on the book series but was written for television.

Private detective Phryne Fisher is traveling to a fancy Christmas in July party with her Aunt Prudence. Also attending are Phryne’s maid/assistant/friend Dot and her lesbian doctor friend Mac.

They arrive to find that someone is already dead (killed by an unseen figure in the cold opening) and soon realize that one of the guests has murder on their mind. Aunt Prudence is partially there to sell a closed gold mine owned by her late husband, and the history around a Christmas cave-in from ten years earlier means that many of the guests have motive for murder. (One woman’s husband was killed there, along with another man’s uncle. One man was one of the business partners in charge of the mine, and a couple have been hiding information about the cause of the collapse…)

Soon enough Detective Jack Robinson (the source of much sexual banter with Phryne throughout this series) and his friendly assistant Hugh show up as well, just in time for the roads to close.

It’s melodramatic as all heck, but I enjoyed this episode quite a bit. The balance between humor and horror was well played, and even as it checked off classic tropes we were happy to go along for the ride. (Besides Christmas staples like being snowed in and contrasting dark deeds with cheerful carols, this story is also inspired by classic mysteries, particularly Agatha Christie’s Ten Little Indians.)

If you aren’t familiar with the series, there is a slim B-plot involving Jane arriving home from school early that might not make much sense, but I think most of this special episode could easily stand alone.

As always with this show, the costumes and sets are sumptuous. The reds and whites for Christmas are particularly lovely, and Phryne’s hat from the beginning is fabulous.

Except for the fact that it is actually, literally, set in July, this episode was more straight Christmas than Christmas in July.

For the reverse (actually December, but hot as heck out) check out Forbidden Fruit, a modern mystery by the same author as the Phryne Fisher books.