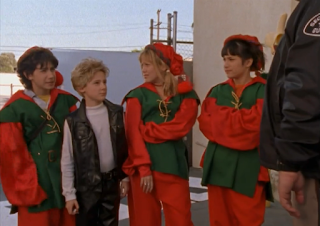 This is the second episode of Lizzie McGuire we've subjected ourselves to, though it predates XTreme XMas by a year. The one I'm reviewing today was only the show's seventh episode, airing in March of 2001.

The premise of the episode, as the title implies, revolves around the teen singer coming to Lizzie's town to record a music video. Although the episode is set in the spring, the music video was for the holidays, hence the Christmas in July connection. Well, okay, technically Christmas in March, but we're using a loose interpretation here.

Lizzie and her two friends want desperately to meet Carter, each for different reasons. Because the shoot is secret, they need to include her younger brother, who knows its location for some reason. They sneak out early, leaving her parents a note - ironic, as her dad was going to surprise her with passes a client gave him.

They show up at the film set and Lizzie tries using her school press pass to get in, only to have it taken away. Her younger brother, having thought ahead, pulls out a bunch of elf costumes for Lizzie and friends, along with a wig and leather pants - he thinks he can pass as Carter. The elf costumes fool no one, but he gets pulled in as a stunt double and taken onto the set.

The other kids finally manage to sneak past the guard, but wind up on the run. Meanwhile, her mother and father show up separately, make trouble, and are detained. Lizzie and her friends accidentally interrupt a rehearsal, before getting chased out. They find their way to Carter's dressing room, but they're found by his manager before they can meet him.

Lizzie manages to convince her to let one of them meet Carter (I'm honestly unclear why she agreed to this), then picks her friend, who wants to sing for Carter. Only she gets to meets him, too, because of idiocy. Then, having inexplicably impressed the director while they messed up the set, they're all allowed to be stunt elves.

The episode ends with a painful performance/quasi-music video with Aaron Carter. I don't believe Lizzie's parents ever made it out.

But it wasn't actually bad.

The season two episode we watched before was trying for a spastic, zany, cartoonish tone, but it completely lacked energy or commitment. While this could definitely have used better writing, it accomplished what it set out to do: to make a live-action teenage comedy/adventure in the vein of Looney Tunes. It delivered the needed energy, and committed to the concept.

I'm not saying I like this - I am not an eleven year-old girl. But, if I were and if this were still 2001, I'd probably have dug it. This episode was, all things considered, a decently put together comedy aimed at that demographic.

Ugh. That music video, though. They played the whole damn thing, and by the end I wanted to throw my TV out of the window. Freaking painful.

Sorry - getting back on track.

The holiday elements were used in a tongue-in-cheek manner. The characters knew it wasn't Christmas, but they invoked the holiday, both in a joking manner and as a hamfisted attempt to elicit sympathy. The plot worked holiday costumes and sets into the narrative using a pretty classic Christmas in July conceit: the need to create holiday content in the off-season.

Overall, considering how much I despised the other episode, I was surprised to find this one, while still painful at times, gelled together much better.

Even so, I'm glad there don't seem to be any other Christmas episodes of this show.
00's Adventure Christmas in July Comedy Erin Snyder