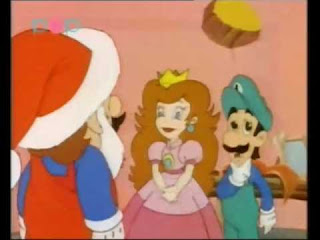 But Super Mario World, the series intended to tie-in to the Super Nintendo, is the one with the Christmas-in-July (technically August, but let's not split hairs) episode, and by extension the one we need to talk about.

This is a half-episode, and it aired alongside Captain N, which sucked for entirely different reasons than Super Mario World. Sadly, Captain N never gave the world a Christmas episode, so we'll have to set it aside and get back to the crappy series at hand.

If you've never seen any of these series and are wondering how anyone would convert Super Mario Bros. into a television series, don't bother asking the writers of this episode, because clearly they never figured it out.

The premise is ostensibly based on the SNES game of the same name, but there's very little overlap. Sure, Yoshi's present, along with a few of the game's minor monsters, but the setting bears absolutely no resemblance to the video game's. If anything, it's closer to "Bonk's Adventure".

No, screw you - you're old, and EVERYONE REMEMBERS BONK'S ADVENTURE.

Sorry. Where was I?

Oh, yes: Dinosaur World. The protagonists are Mario, Luigi, Princess Toadstool, Yoshi, and Oogtar. If you're wondering who the hell Oogtar is, he's a caveman child who gets into trouble. Also, he's kind of an asshole.

In an attempt to get him to be less of an asshole, the other characters decide to introduce the world of the cave people to Christmas. It's the middle of summer, but they decide it doesn't matter and start decorating. They make a bunch of toys, but Oogtar - having been warned that Santa only gives presents to good children - sneaks into the sack to steal his pick first.

This is naturally when King Koopa (aka Bowser, but they're not calling him that for some reason) steals the presents. Mario, dressed as Santa, goes to rescue Oogtar and get the gifts back. By this time, Koopa's already found the kid and has him tied up over a hungry dinosaur with a candle slowly burning through the vine.

That's right - 80's cartoon villains always pulled this crap, didn't they? Is it really that important he hangs there waiting to die for fifteen minutes first? Just cut the damn vine, so this show can be 19% less annoying (normally it would be higher, but this series is obnoxious as hell).

At any rate, Mario - still disguised as Santa - and Yoshi fight their way through the stupid castle, rescue the stupid kid, and steal back the presents. The kid learns a stupid lesson, and the stupid plot resolves.

Think that sounds dumb? Wait until you hear about the editing. In an attempt to drill the connection to the game through the viewer's skull, they dumped a crapload of Mario sound effects all over this. They also do that thing from Super Mario World where the screen gets pixelated whenever there's a cut.

On top of everything else, they don't even get the character designs right. Yoshi, in particular, looks abysmal - the game's proportions are adorable: this thing's a monster.

The holiday elements should be pretty clear. Christmas is used as a cheap story element here, nothing more. But that's not at all surprising: this is a cheap attempt to simultaneously cash in on and advertise the far superior video game.

That game's a classic, a work of art. The show is crap.
Christmas in July Comedy Episode Erin Snyder Fantasy Games Sucks