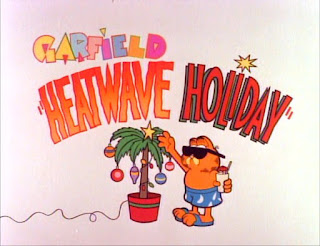 Raise your hand if you liked Garfield as a kid. It’s okay, don’t feel too bad, we’re right there with you. I used to watch this show, but Erin remembered this exact episode, in that spooky way where every line comes into your brain right before it’s spoken.

If you missed this series, it’s made up of super-short bits that are more-or-less animated versions of actual Garfield strips and short cartoons with slim plots. Some of the pieces are Garfield, and the others are “U.S. Acres,” a property which, until this moment, I assumed only existed on this show. No, apparently this was a second comic strip by Jim Davis, and it was limping to the end of its not-critically-acclaimed run around this time.

Of the three six-minute shorts that make up this episode, the last one was the best. Briefly, the first one is about Garfield and Odie being scared of a monster story, and the second is a U.S. Acres bit about playing pranks to make unlikely predictions come true. Both of these stories are barely funny.

Happily, the last short was the holiday-themed piece, and it was by far the best. It’s the height of July, and Garfield is trying various tactics to stay cool in the heat. He creates a snowscape in the backyard through misuse of an ice-maker, and gets out the Christmas decorations. John approves of the idea of beating the heat by “thinking cold” and the decorate the house as if it were December.

Up to this point it’s cute, but nothing special. Then the neighbors see the decorated house, and they assume that John just wants to be the first one to have the decorations up. So the holiday spreads as more and more people either become worried that they’re missing out, or begin to think that it must actually be Christmas if everyone else thinks it is. On a certain level, it’s a cute commentary on the fact that holidays only exist because we all agree that they do.

Eventually the situation is defused by a news broadcast, but in the meantime, amusing fun is had by all. Not bad for six minutes.
80's Christmas in July Episode Lindsay