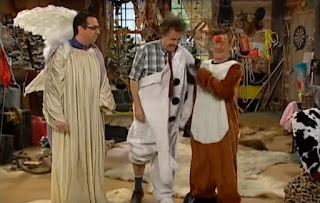 You’re not mistaken, we’ve already done the actual Christmas episodes of this show.

As I said then, The Red Green Show is a hybrid sketch comedy/sitcom/mockumentary/parody of both local access and home improvement shows. And probably a few other things besides.

The main Christmas elements of this episode were in the “plot” portions. Each episode has a “plot” that opens the show and resolves at the end, with additional short scenes interspersed between the other skits.

This episode’s plot concerned Harold’s ill-fated attempt to bring a Christmas in July celebration to the lodge as a tourist attraction. He is not exactly met with kindness and goodwill toward men. Harold tries again, mounting a parade, but he unwisely lets Red drive.

Eventually they give up on Christmas in July. We enjoyed that this showed some of the potential downsides of trying to force unseasonable holiday cheer: holiday costumes are too hot to wear, impatience and otherwise uncharitable behavior that wouldn’t fly in December.

The other winter element was a short where Red demonstrates how to drive in snow without snow tires. It involves tubes, danger, and duct tape, naturally.

This gave us some smiles and some solid laughs. It was enjoyable, which puts it miles ahead of most Christmas in July content we’ve found, and it was snarky, which is welcome any time of year.

Oh, FYI, the entire 300 episode run of The Red Green Show is up on YouTube legitimately, if you’re interested in that sort of thing.
00's Christmas in July Comedy Episode Lindsay