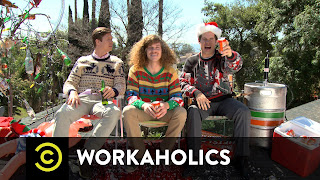 I believe this is the second episode of Workaholics I've ever seen, and - while I found aspects humorous - I don't see any reason I need to watch a third. To be fair, "The Strike" was part of the series's first season, so it's entirely possible it improves substantially over time. Feel free to chime in with a comment if that's the case.

The show revolves around three idiotic roommates - Blake, Adam, and Anders - who work together at a call center. Based on what I've seen, I'd describe it as having aggressively low production values. My sense is that this is intentional, that it's designed for the audience to laugh at the show as much as they're laughing with it. Imagine a version of Office Space without a POV character, lower everyone's IQ to Beavis and Butthead levels, and you'll have a good idea of what you're in for.

This episode opens in the middle of summer with the trio getting ready for "Half-Christmas," which is essentially a version of Christmas in July they think they invented. They ask their boss for the day off, and are flatly denied. Blake and Adam decide to strike, while Anders decides he'd rather not lose his job.

His boss treats this as if Blake and Adam quit and hires a pair of replacements Anders hates, mainly because they consistently mispronounce his name. He tries to get his friends to apologize and beg for their jobs back, but they refuse to budge.

Instead, Adam and Blake enlist most of the office by promising to fight for basically whatever they want. Despite his dislike for his new co-workers, Anders sticks by his decision, largely because he's being rewarded. His boss makes the mistake of trusting him with sensitive company information, and he discovers their call-center is using the National Do Not Call List as a calling list. Initially, he's willing to play along, but he switches sides when his boss mispronounces his name.

Armed with damning information about the company, Adam is able to get a day off for Half-Christmas, along with a few other minor concessions. He abandons the rest of his co-workers' demands as the party begins.

There's quite a bit of Christmas in this thing, but it's all decorative. From a plot standpoint, any made-up holiday would work (or any other catalyst for the strike, for that matter). The point of "Half-Christmas" is the point of almost everything in this episode: it's dumb.

That's not to say it isn't funny. This kind of shock-value absurd antics might not be high comedy, but - in the hands of good comedians - it can elicit some laughs. And the stars know their stuff. Not everything that happens here is hilarious, but enough jokes hit to keep it from getting bogged down. I didn't love this, but I certainly didn't hate it, either. And in the scheme of things, that's not bad for a sitcom.
2011 Christmas in July Comedy Episode Erin Snyder