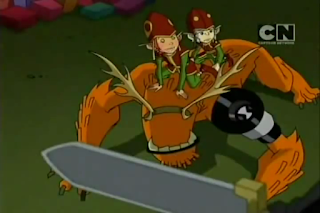 This is the first episode of Ben 10 Lindsay and I have seen, though I was mostly familiar with the premise going in. A kid has the power to transform into ten different aliens, so he uses his abilities to fight various threats.

I hadn't realized the series took place during a cross-country vacation in his grandfather's RV. I'm fairly certain that's intended as a nod to the 70's Shazam series. Ben Tennyson is more than a little reminiscent of Billy Batson, who could likewise call upon otherworldly powers and transform. This series is more or less an update.

This episode begins on a hot summer day while Ben, his grandfather, and his cousin, Gwen (also a series regular - apparently, she uses magic in some other episodes) are driving through Death Valley. After a failed attempt to improve the air conditioner, the RV breaks down. They find a strange door in the desert with cool wind blowing through the cracks. When they go through, they find a wintery town decorated for the holidays.

As the responsible adult, the grandfather assumes everything's okay and doesn't make the kids turn back. However, he's abducted by Christmas elves almost immediately and taken before Jingles, their master, who believes he's finally found Santa Claus.

Okay, I know that sounds stupid, but it's actually pretty awesome. It's clear from the start that there's something very wrong with Jingles, and not in a silly way. He's not evil - his intention was to create something beautiful - but the magic transformed the town almost like a virus. This is a nightmare recreation of Christmas town, complete with lethal toy soldiers and ice monsters summoned by magic hats in the dark of night.

The elves themselves are children, transformed by the same magic that sustains the town. Ben and Gwen begin to change, taking on an elfin appearance. The sequence was partly played for laughs, but there was also a subtle element of body horror layered in. Making matters worse, the one elf who was rebelling against Jingles and helping them believed it was still 1930, when he was abducted. I was genuinely impressed with the setting and tone: this wasn't afraid to play with some dark, fascinating material.

I was less interested in the fight sequences and resolution. While there were a few decent action scenes, they came off a bit by-the-numbers and uninspired, at least compared with everything else in the episode.

It all culminates with Ben destroying the machine, but the curse lasting until the gifts the elves made were delivered. My issues here were two-fold: first, breaking the magical machine at the heart of the town involved a tone-breaking sequence that seemed to be a Frogger joke. Maybe this is a running gag or something, but it felt like a let down.

More than that, the pacing of the ending was a bit rushed. As a result, they skipped over explaining things like the gifts needing to be delivered, the time dilating aspect of the magic, and more. We were able to piece all of this together from context, but it would have snapped together a lot cleaner if they'd been willing to trim out some of the fat. Did we really need Ben 10 transforming into a flying alien, so they could deliver the gifts? Why not just have Jingle's change of heart be the catalyst?

There was a very intriguing epilogue that at least hinted at what was going on. Once the gifts are delivered, the town is transformed. They discover a more conventional tourist spot and even run into the elf they met - now an old man returning to visit with his family (I guess the magical version of the town existed outside of time or something - again, I'd have liked a better explanation). As for Jingles, they find only a monument: he founded the town more than a hundred years earlier, and is presumably long gone.

Despite the episode's bumpy ending, I still enjoyed this quite a bit, both as a Christmas in July piece and just as a regular Christmas story. It was built on a mirror version of a magical Christmas town without feeling like cheap shock value or idiotic parody. It's rare that we get to see a disquieting and twisted look at Christmas magic that doesn't go overboard into the grotesque and campy: this, however, takes the idea of a dark workshop seriously.

The summer elements were likely present to justify the episode's production in the middle of a series set during those months. However, intentional or not, the seasonal contrast serves to magnify the sense that something wrong here, something's unnatural.

If, like us, you're a fan of weird SF and fantasy reinterpretations of the holidays, this is worth checking out. It's far from a perfect episode, but the premise is surprisingly well constructed.
00's Action Christmas in July Episode Erin Snyder Fantasy Science Fiction Superhero