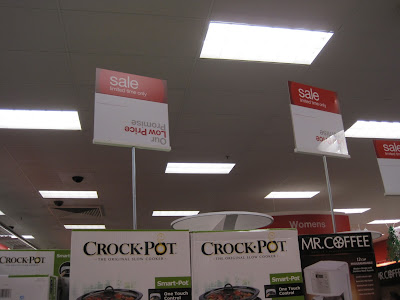 At this point, Black Friday has more or less completely consumed Thanksgiving. If people still bother with the feast, it must be to store energy for the long night ahead. As co-founder of the internet's self-proclaimed premier holiday blog, I've decided to dub the night between Thanksgiving and Black Friday "The Blackest Night."

In case you're either living under a rock or enjoying the holidays with loved ones instead of watching news reports of disgruntled shoppers pepper-spraying a crowd, the old-fashioned 3AM door-busters are an antiquated notion of a bygone era: Black Friday begins, at the absolute latest, at the stroke of midnight. Some retailers aren't even satisfied with that: Toys R Us and Walmart opened for Black Friday at 9 and 10 PM, respectively. Yes, Black Friday officially started on Grey Thursday, Black Friday Eve; the Blackest Night.

There was no way in hell we were missing that.

Lindsay and I arrived at the Queens Toys R Us around 10. They'd already been open for about an hour, but there was still a massive line outside, presumably in compliance with occupancy laws. It took us a solid half hour to make our way through that.

The inside was actually a little less horrific than would have suited our purposes. Sure, customers were pushy, but I the environment didn't seem too bad. Granted, we never actually made it into the electronics section, where the real deals were located.

When we were making our way towards the door, we found our path blocked by an employee manning a rope. "Are you looking for where to pay?" she asked, trying to ensure no one was cutting the extremely substantial line.

It makes me wonder if we were the only visitors she'd encountered that day who weren't actually buying anything.

Afterward, we headed for the train station towards our next stop. On our way, we swung by a Best Buy, just to see what the line looked like. Here's a picture: 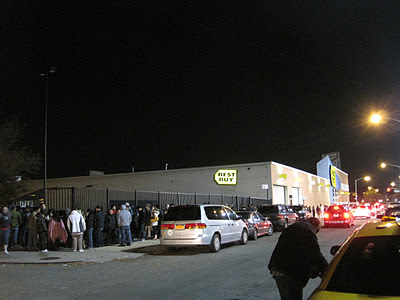 It's hard to tell, but the line ends right around the car with its break light on, just about fifty feet from the store's entrance. Unfortunately for those waiting, it was pointed in the other direction. We took this picture around 11:30, and the store was scheduled to open at 12. I have little doubt that line was fully circling the store by the time it opened.

None of this prepared us for Target. We arrived to find that the only entrance in use was through the parking garage. The scene outside, at almost exactly midnight, warranted video:

I don't remember seeing a sign expressly prohibiting driving, but it was pretty clear you couldn't get a car up there anymore. The crowd spiraled up to the fourth level, where the line began. From there, it snaked up, higher and higher into the parking garage.

I was skeptical that we were going to have the patience to wait through that line, but it went shockingly fast. I had the impression that they weren't in much danger of hitting their occupancy maximum (or maybe they just didn't care), but either way, they kept the line moving at a pretty steady pace, and within a half hour or so we were in.

Toys R Us had let us down, but Target delivered a full dose of holiday horror. This was a place of legend, nightmare, and discount merchandize. 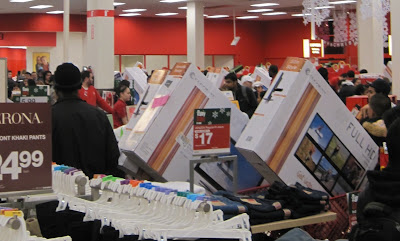 The second floor was a crowded sea of carts, each housing no less than one flat screen TV. It was so packed, you couldn't move: the line circled the entire floor, like a snake eating its own tail.

Lindsay and I decided to check out the Christmas section down on the first floor to see how that looked. Here's what we found: 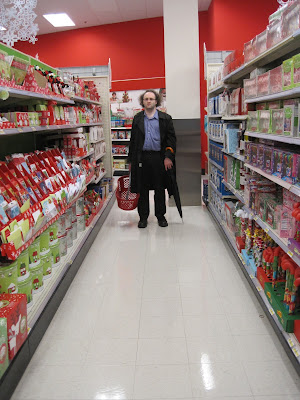 How about a wider shot? I asked Lindsay to back up and offer a better sense of perspective. 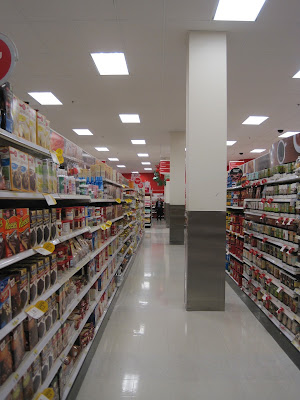 It wasn't just the Christmas decorations. While electronics and appliances were packed beyond reason, about half of the store was almost entirely empty. It was almost impossible to elbow our way into the toys section located on the second floor, but once there we could move about unimpeded. Because no one was really there for toys. Or Christmas.

It was at that moment I made a significant realization: there were thousands of people in that store, and none of them were actually there for Christmas presents. Maybe the next day they'd go out and shop for others, but that night - the Blackest Night - has taken on a new meaning: it's a holiday where Americans go out and buy themselves a new TV.

And we'll push, crush, pepper-spray, or even shoot anyone in our way. Because, at some point, a sense of entitlement convinced us that the property out there belongs to us, that we have a right to it.

Maybe all this is an appropriate way to honor Thanksgiving and the origin of our nation after all.

For the record, we left without a big screen TV, though I did buy some floss, and Lindsay picked up some energy bars, and a discounted Christmas shirt. We were downstairs, so there wasn't any line, at all. I mean, it would have been a shame to leave empty handed.