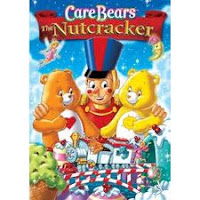 Let's be clear - this isn't good in any meaningful definition of the word. It's bad. Kind of really bad. It doesn't make sense, and it feels like the unholy love child of a toy commercial and the drug-fueled ramblings of a coke-head. But then, isn't that what the 80's were truly about?

Ostensibly, this was supposed to be based on The Nutcracker. That might be a bit of a stretch: this is mainly an excuse for the Care Bears to roam around Toyland, a concept that feels hopelessly redundant. I mean, the animated Care Bears have stitches on their backs: there's no way they're supposed to be "real" bears.

At any rate, they're now walking around a child-like fantasy kingdom that is not Care-a-Lot, but might as well be. And they're fighting a villain who's basically the same as No-Heart (Lindsay assures me it's the same voice actor; I'm sure she's right) going by the name of "The Vizier," because it's too much to ask to retain any kind of similarity to the source material. There is a Rat King, though he's nothing more than an incompetent lackey. I'll let you try and imagine just how idiotic his lackeys are.

To the Care Bears' credit, they occasionally use their Care Bear Stare as something other than concentrated peer pressure. At one point they're on a train being overrun by the rat army, and they start shooting them off with their chest symbols. It's better than nothing, but for a race of creatures with weaponized psychic energy at their disposal, they get their asses handed to them far too often. I mean, in an earlier Care Bear episode, I once saw a bear generate hard-light heart constructs, jam them into a stone wall, and use them to climb a tower. So during The Care Bears Nutcracker, I found myself yelling at the screen, "Stop fucking around, and kill the goddamn rats!" I mean, come on, The Care Bears basically laid the foundation for Geoff Johns's rainbow of Lantern Corps: read Blackest Night if you want to see what weaponized compassion should be capable of.

At any rate, this special often gets grouped with the absolute worst of the holiday specials. Look, after last year, Lindsay and I are connoisseurs of awful Christmas Specials, and this can't compete. You want to give up hope on mankind? Go watch The Star Wars Holiday Special and Casper's Haunted Christmas. The Care Bears Nutcracker Suite, on the other hand, walks the line of so bad it's almost good. I don't know if it fully crosses over that line, but it's definitely watchable.

In fact, if you're a Brony (that's a fan of My Little Pony: Friendship is Magic, for those of you with lives), you should definitely check this out. There's a similar spastic, equal parts sugar and cocaine, quality to both.

The special occasionally uses music from the Nutcracker Suite, though it's got to be one of the worst recordings ever made. More often than not, they don't even bother, instead using generic synthesized music.

You can generally find this thing used on Amazon, if you're so inclined. Alternatively, you could pick up any other Care Bears special or movie, get so smashed on eggnog you can't think straight, then put it on. I'm pretty sure the experience would be about the same.
80's Erin Snyder Fantasy Special