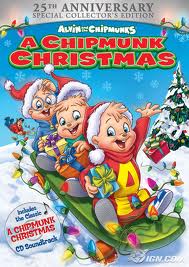 Erin and I have a... disagreement about The Chipmunks. I find them mostly inoffensive to funny, and I have a bit of a soft spot for their animated selves that stems from a love of The Chipmunk Adventure movie. (I have no idea whether that movie is actually any good, but I loved it as a kid.)

Erin hates The Chipmunks, and he can't even identify why. So for his commentary, you can just imagine him tearing his hair, muttering about stupidity and incoherently shouting in exasperation.

A Chipmunk Christmas (1981)
This TV Special was a loose sequel to the 1961-62 animated series The Alvin Show, and aspects of it make no sense without a basis in that, including a nonsensical dream sequence about the other segment from that series.

So here's the set-up: cliché sick kid at Christmas. Alvin gives the kid his harmonica because he's a big fan. But oh, no! Now Carnegie Hall is calling, and Alvin needs money for a new harmonica! Plus stupid misunderstandings and lots and lots of stopping for songs. It's not terrible, but it's mostly kind of boring, and it belabors obvious plot points. 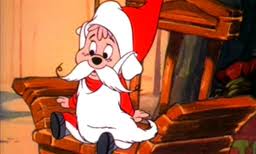 The animation is okay except when it loops, and it's in a mix of the designs from the earlier tv series and Chuck Jones' standard style.


Merry Christmas, Mr. Carroll (1989)
This is an episode from the chipmunks show I remember. It has more extreme personalities, more zaniness, and if, possible, a dumber plotline. The animation is more consistent, but less artful.

This one's a riff on A Christmas Carol, in which Alvin has to learn to think of others,not about getting gifts, in time to write an essay about the spirit of Christmas. The designs on the other characters standing in for the three spirits are extremely ridiculous.

Dave's Wonderful Life (1989)
Ouch. Despite some amusement inherent in the silliness of the setup, and the Twilight Zone riff, this parody of It's a Wonderful Life falls pretty flat. It doesn't even obey its own internal logic. It would have been pretty funny if it had paid attention to the history set up by this same series, that established that if Dave didn't exist, the Chipmunks would be, you know, dead of hypothermia and starvation.

Overall I'd give this one a pass, unless you're a big fan. Even then, watching this might convince you that you're less of a fan than you thought.
80's Comedy Episode Lindsay Musical Special