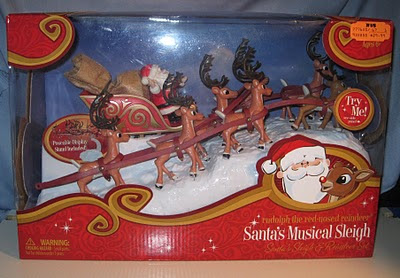 When I'm not wiring my eyeballs open to force-feed Christmas specials directly into my cerebral cortex, I spend a lot of time reviewing toys at Toy Remix. Since this is Christmas-related, I decided it really belonged over here.

This monstrosity is produced by "Forever Fun," a toy company who's sole purpose seems to be making action figures and playsets based on old Christmas specials. To their credit, they've got some good merchandise out there, including a six-inch scale articulated Rudolph I bought a few years ago and reviewed at my OTHER toy site (I'm a very busy man).

The toy I'm looking at today is smaller and lacks articulation. On the other hand, it comes with eight other reindeer, Santa, and a sleigh. So take that however you like. 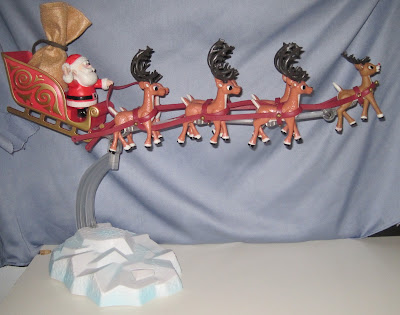 I keep calling this a toy, although that's actually misleading. Sure, it's packaged like a toy and it's sold at Toys R Us, but this really doesn't feel like a toy once it's out of its box. It's more like a Christmas decoration, something you'd expect to find at Hallmark.

First, a little about the packaging. Artistically, I like the snowy hill, and my guess is it does a decent job selling this as a substantial object. The downside is that it takes up a lot of space and is a bitch to remove. The number of twist ties required to  keep everything in place is a bit overwhelming. By the time you're done, there won't be much left of that hill, which is made of a thin, papery plastic.

The actual base is a smaller, hard plastic piece. It looks all right and houses the electronic components - more on that in a bit. In addition, there's a clear plastic arm that attaches to another clear plastic apparatus which connects to everything else. There are a number of joints on this thing, which in theory should give you some posing options. 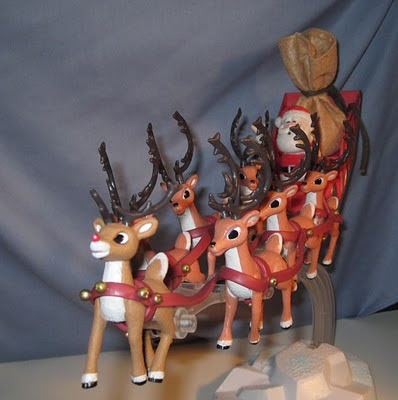 The problem is that the joints are way too loose out of the box. I had to tighten several with a screwdriver before it would hold up the deer. The experience was anything but fun, so I don't dare experiment with posing for fear of loosening the joints again.

In addition, nothing feels all that secure or balanced. The base is fairly lightweight, which means this will tip over if you rotate the sleigh too far one way or another. The fact that the pivot joint won't stand up to a strong breeze makes this situation all the more disconcerting.

Nevertheless, this is a pretty cool looking set. Providing that you think of it as such, it's not a bad a decoration for the holidays.

Of course, I haven't told you about the best part yet. There's a button on the base that plays an extremely loud and annoying rendition of the music from Rudolph the Red-Nose Reindeer. Perhaps mercifully, it skips most of the song.

Because it's Christmas, I thought it'd only be fair to share the experience. For the full effect, be sure to crank your speakers, sit back, and relax:

In case you were wondering, I didn't pay the full retail price of $29.99 for this thing. Last January, I found this in the clearance section of the basement of the Times Square Toys R Us marked down to $10. I managed to combine that with a coupon I had, and wound up paying five.

Getting crap no one wanted for a fraction of the price after the holidays have died down: now that is the true meaning of Christmas.
Erin Snyder Toy