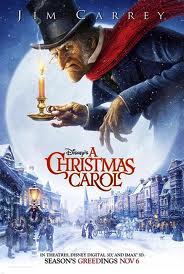 Ugh. What a boring excuse for a movie. We all know the story of A Christmas Carol (if you don't, well go read it. It's short and free online, and we're planning on looking at quite a few versions this year) so the only questions here are its quality as an adaptation and its quality as a movie. This fails pretty badly on both counts.

The first problem is that A Christmas Carol is not a long story. No, not even if you shoehorn in as many lines of dialogue and tiny descriptive moments as you can bear, including many that wiser screenwriters left out of their versions. Mickey's Christmas Carol works by being short. Muppet Christmas Carol has musical numbers. This one either shoves in deadly dull sequences of nothing; pointless flyovers of GC landscapes, establishing sequences for settings that are never used, ridiculously stupid chase sequences that make no sense, ludicrously over the top “this was filmed in 3D!!!” pans, or it just takes forever to get to the next part.

On the positive side, that meant we had lots of time during the film for MST3K style commentary in between the dialogue.

And there were lots of things to mock. Hideous CG monsters, I mean children, for one. Erin tells me that Polar Express is set even further in the uncanny valley, but this is pretty bad. The character designs are stupid. The eyes are dead and glassy. There are contradictions moment to moment whether “real” physics or “cartoon” physics governs the movement of characters. Erin pointed out that motion capture completely fails to be realistic when the body shapes of the characters are so far removed from those of the actors. Bob Cratchit looks like Mundungus from the Harry Potter movies.

There are a few decent sequences, and most of the backgrounds are quite pretty, but the pace is so awful that I had a hard time noticing anything good. The design on Christmas Future was actually pretty great for a while, but every time this movie started to approach something resembling heart, the message, or anything actually moving, it undermined it with sight gags or very poor art direction. I found it difficult not to laugh at anything dramatic or wince at anything “funny”.

Okay, I know I've gone on for a while, but there's one more thing that drove me up the wall.


...his glance happened to rest upon a bell, a disused bell, that hung in the room, and communicated for some purpose now forgotten with a chamber in the highest story of the building. It was with great astonishment, and with a strange, inexplicable dread, that as he looked, he saw this bell begin to swing. It swung so softly in the outset that it scarcely made a sound; but soon it rang out loudly, and so did every bell in the house.


The above does not equal something that looks like this:

Because this is a bell panel. A big house in the Victorian era has this in or near the servants' quarters, each bell connects to a different room so that if Lady Agatha rings for tea, it isn't brought to Lord Bertie's room. WHY IS THERE A MULTI-BELL PANEL IN A MASTER BEDROOM? Please correct me if I'm wrong, but I just think they didn't do a lick of research.

If it had been less boring, that might not have stayed with me. But it was. Very Boring. Not Recommended.
00's A Christmas Carol Fantasy Horror Lindsay Movie Sucks