Once More for the Cheap Seats: If a Movie's Set at Christmas, It's a Christmas Movie 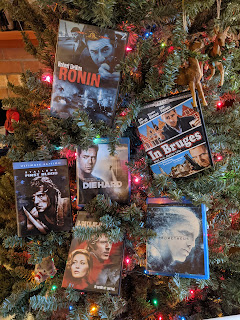 I want to start this off by acknowledging I've been too quick in the past to dismiss arguments that Christmas movies should be defined by tone or subject, as opposed to setting alone. At times I somewhat uncharitably assumed these arguments were entirely without substance, when I should have dug deeper: there is a case to be made.

I now want to immediately follow up that acknowledgment with an assertion that I'm still right, and the case to the contrary is wrong. It's just... it's more nuanced than I was giving it credit for. Mea culpa and all that.

So, with that out of the way, let's rip open the bandage covering the bloody, infected wound that is the debate over the definition of "Christmas movie."

The movie most wrapped in this is Die Hard, but... I'm sorry, that's just absurd. For reasons I've covered extensively in the past, Die Hard is about as festive as they come. It's not just a case of definitions clashing - the definitions most people use to exclude Die Hard actually include it. People are just wrong about the movie.

But what about Prometheus, First Blood, Black Christmas, and things like that? Are those Christmas movies?

My answer remains an unambiguous yes. If a movie's set at or around Christmas, it's a Christmas movie absent a compelling argument to the contrary (Jurassic World being a rare example of a movie I wouldn't count, despite it possibly being set during the holiday break). To put it another way, if a movie is set during Christmas for story, theme, or tonal reasons, regardless of what those reasons are, it should be considered a Christmas movie. Naturally, there's room for subjectivity in that, but I think it's a good place to start.

Most alternate definitions also consider tone and theme, but use these as a starting point. Usually, they boil down to some version of:

Before I get into why that's a bad definition, let me flesh it out a little. What this is really saying is there's a genre (or perhaps a few genres) of Christmas movies. Holiday Inn, A Christmas Story, Home Alone, the deluge of made-for-TV Hallmark and Lifetime movies... all of these are connected. They share certain tones, themes, and feelings, though I think most people might have trouble identifying just what those tones, themes, and feelings are.

I'm not most people. Here's my take:

The connective tissue is nostalgia, specifically American nostalgia originating in World War II and the immediate aftermath yearning for a pre-war time. Want to know why virtually all the "classic" holiday music comes from that period and is defined by a blend of wistful melancholy with a touch of hope? It's because the period combined modern media (radio, television, and movies) with a moment many people had a damn good reason to think positively about the good old days. Simpler times with family and loved ones. And without trouble.

I'm not saying nostalgia was somehow invented in the 1940s, nor am I saying it had never been associated with the holidays before. But the '40s and '50s were when this particular picture of Christmas became frozen in the zeitgeist, and when American Christmas movies began to coalesce around that version of the season.

So, why don't I like this definition for a Christmas movie? Well, first of all, because I have a distaste for the idea that "Christmas movie" needs to be short for "American Christmas movie." Not every country locked in their yuletide traditions in the same decade or even the same century. Japan either waited until the '80s or is still working out the kinks. Meanwhile, England cemented its current image of Christmas almost a century earlier. But then that brings me to my second objection...

Let's talk about A Christmas Carol, arguably the most important holiday story ever told, other than the first (I refer, of course, to primal solstice myths concerning the dwindling and return of daylight). A Christmas Carol has spawned countless imitators, all over the world. And A Christmas Carol...

Actually, A Christmas Carol incorporates themes of nostalgia into its narrative. In this case, it wasn't prewar, but rather pre-industrialization, when Christmas was a social event spread out over a longer period of time. Still nostalgia, though. I'd argue that fact, coupled with post-war sentiment, gave birth to movies like It's a Wonderful Life. Regardless, A Christmas Carol isn't exactly a counter-example.

But A Christmas Carol was more than a story about nostalgia: it was also a ghost story. Arguably, the supernatural elements were actually baked into the nostalgia, since the scary side of Christmas had traditionally been part of rural traditions. Even if that wasn't intentional, A Christmas Carol was, among other things, part of the horror genre. It was also a time-travel story that influenced countless science fiction stories and films (but I think we've covered that).

Limiting its influence to just one set of stories delineated arbitrarily by tone and theme strikes me as reductive, particularly because those horror elements are primal aspects of the holidays. In addition to a long tradition of ghost stories, there are myths of witches, demons, giants, and monsters. Krampus and the Yule Cat have gotten quite a bit of attention recently: why are these less authentically "Christmas" than Santa Claus? And speaking of Santa...

A lot of the stories around Santa Claus seem to be interwoven with those monsters. Krampus and Saint Nicholas were typically depicted as working together, don't forget. And the larger mythos around Santa is drawn from numerous traditions tracing back to folklore and myth. The Jolly Old Elf is as much Odin as Saint.

This sets aside the fact Santa Claus tends to get a sort of "free pass" when it comes to being considered "authentically Christmas." Consensus seems to hold that his specials and movies are automatically Christmas in nature, even when they stray from the tone and themes discussed earlier (unless, I suppose, they shift too far into horror).

It all falls apart. The nostalgia-centered version of Christmas is one of many, not the definitive yuletide experience. Horror stories around a midwinter hearth are ancient and authentic, too. Stories about alienation and depression set during the month of December reflect a common experience we can all relate to. Religious movies mostly bore me, but they should count, as well.

Christmas contains multitudes. I refuse to accept a definition of "Christmas movie" that doesn't allow for any of them. And I certainly don't like any definition that is deeply rooted in specific American traditions recycled from a specific era.

We're already stuck with holiday music that all sounds alike: let's not define ourselves into the same gift box when it comes to movies.