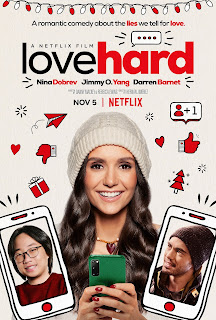 I want to start off by saying clearly and for the record: I hate this movie.

I know what you're thinking. You're thinking, "But, Erin, you hate a lot of movies you watch here." Maybe. But this... this is different. I hate this deeply, completely, and profoundly. I hate that this movie employs uncomfortable circumstances constantly throughout its runtime. I hate that it utilizes the absolute most tired '80s tropes shamelessly (this thing features both an over-sexed grandma and a scene where the main character juggles multiple dates at the same time and venue). I hate that it integrates pop-culture debates about Die Hard, Love Actually, and Baby, It's Cold Outside so shallowly, it feels like the discussions were stolen verbatim from Twitter arguments. And I really hate that one of the romantic leads - and the story as a whole - are a hair's breadth away from being a manifesto for incels.

But most of all I really, deeply, truly hate that this thing... is actually... pretty good.

And, no, that's not a contradiction. Everything above is either a personal gripe or a moral stance, not a reflection of quality. As a romantic comedy, this succeeds in utilizing genre conventions, building compelling characters, and selling their relationship. The technical aspects are above par, as are some of the artistic. The actors - particularly the leads - do really good work and sell their characters. I do have some issues around several factors, but none are enough to change the fact this is ultimately a good movie.

Goddamn them for that.

The central character is Natalie, a writer with an ongoing anonymous column about her disastrous love life. The holidays are coming up, and she's exhausted: while her boss loves that her troubles translate into a successful series of articles, she wants to be happy. She wants love.

And she seemingly finds it through a dating app which matches her with someone who seems perfect, with one caveat: he lives on the other side of the country. Josh is tall and handsome, he has an interesting job, and they hit it off through multiple text and phone conversations despite never having met in person. Natalie decides to fly to Lake Placid, New York, to surprise him, only to discover she's been catfished. The photos he shared were fake, his job was a lie, and he lives in his parents' basement.

Natalie is of course furious and is initially going to leave, but she's persuaded to stay after learning the man Josh was pretending to be actually does exist: his name is Tag, and he's an acquaintance of Josh's living in the area. Josh convinces Natalie to pretend to be his girlfriend in order to impress his family; in exchange, he offers to help her win Tag. Natalie eventually agrees, and if you're wondering how it could possibly not occur to her that she's doing to Tag exactly what Josh did to her... yeah, that would be one of those issues with this that I think represents a concrete problem with the script.

Regardless, things escalate as Natalie grows to like Josh and his family. Well, most of his family - she's not a fan of his older, self-obsessed brother, and takes Josh's side in their rivalry. This snowballs into her and Josh becoming fake-engaged.

She also helps Josh regain some self-esteem. He's self-conscious about how he looks (despite of course looking perfectly fine - you know how this genre works). He admits catfishing her was wrong, but points out she'd never have given him the time of day if he'd used his own picture.

Meanwhile, she's having mixed results with Tag. He likes the person she's pretending to be, but it's not her. She shares none of Tag's interests or hobbies, and pretending otherwise is exhausting. Still, she pursues the relationship, because... because... Honestly, it's kind of unclear as to why. The movie alternatively implies it's because she wants a "successful" love story to write about or because she just feels entitled to him. Neither really make much sense in context - the movie just kind of drags this out, so the climax can be as awkward as possible.

This comes in the form of a massive party arranged by Josh's family to celebrate the engagement. They invite everyone in town, including Tag, which leads to the aforementioned juggling fake boyfriends thing. It's not sustainable, and eventually everything comes out, Tag points out the absurdly obvious hypocrisy in trying to trick him into a relationship, and she runs to a hotel to write the story she owes her boss.

While there, she has the requisite epiphany, realizes she loves Josh, and runs over to reunite through a trope borrowed from his favorite Christmas movie, Love Actually (hers is Die Hard, with Love Hard's title being an allusion to both despite not really touching on themes from either).

Again: I hate this movie.

Let's start with Josh. I compared him to an incel earlier, and I believe the comparison is accurate (if you're unfamiliar with the term, I strongly recommend you don't google the word - you really don't want to know). This isn't to say the character literally subscribes to that ideology - there are, to be fair, some moments implying he has feminist leanings - but his situation, coupled with the expectation we'll sympathize with him, come far too close to the implication Natalie owes him a chance. He's the archetypal "nice guy" who can't get a date because of his looks, and therefore anything he does to overcome that obstacle is ultimately forgivable. And besides, the plot tells us, it's not like women are better...

This line of thought spirals into misogyny fast. Similar ideologies have appeared in the writings of pick-up artists, rape apologists, and mass shooters - using it as a basis for a romantic lead in 2021 is grossly inappropriate.

The movie tries to gloss over this by tying Josh's insecurities to his race. Josh is Chinese American, and the features he associates with his heritage are the ones he believes make him undesirable. The movie handles these aspects a bit better, but - in my opinion at least - it doesn't fix the problem.

However, the movie also never implies Josh was right to do these things. It wants us to empathize with and forgive him, but it acknowledges his actions were wrong. Is that enough? I'd say no, not remotely - I felt it was criticizing the actions but condoning the motives. But I'm guessing others will interpret it differently.

I also wasn't impressed with the movie's humor. Far too many of the jokes are ones I've heard countless times in other movies - or just in the world. When the movie goes for laughs, it feels lazy and uninspired.

So, with all that being said, why am I saying this is "pretty good," as opposed to "awful?" At the end of the day, romantic comedies come down to whether the characters are interesting, emotionally engaging people, and whether you're invested in their relationship. And when all's said and done, it clears that bar.

A lot of credit needs to go to Nina Dobrev and Jimmy O. Yang, the two leads. They elevate the material and sell their characters' journeys. Likewise, director Hernán Jiménez does solid work here. I've seen made-for-TV schlock and I've seen cinematic romantic comedies - this feels like the latter. If you're a fan of the genre and you can stomach the uncomfortable situations, the problematic aspects, and the host of other issues... you honestly might really enjoy this.

I did not. But after more than ten years reviewing movies like these, I'm getting better at telling the difference between things that are truly bad and things that just don't click with me. And, as much as I wish it were otherwise, this one isn't bad.