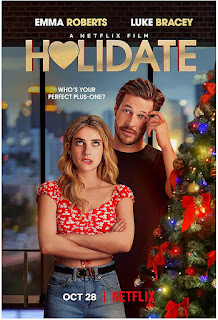 Recently, I've noticed a change in the way I watch and think about movies. I'm fairly certain that several movies I've watched over the past month would have received a far less charitable review even a year ago, but now... I don't know. I think I've been growing as a person, and my perspective's shifted. When something doesn't work for me, I've become more likely to dig deeper for elements that were well constructed; I've become more interested in seeking out aspects of competent filmmaking than in ripping apart something I dislike, even if I think it's bad.

Fortunately, I think sitting through this pile of shit cured me, because I'm feeling nothing but disgust right now. Kind of refreshing, if I'm being honest.

Holidate is a romantic comedy about two people who meet in a mall while returning terrible Christmas presents and agree to become each others' "holidate" for the following year - in other words, they go out essentially as friends so they're guaranteed a date for each holiday. The narrative then jumps from holiday to holiday, as they form a friendship, fall in love, sleep together, get in a contrived argument, break up due to one of them having commitment issues, then reunite at the mall at Christmas. If you're at all familiar with the genre, you know the outline. There is, of course, a lot more to this. The supporting cast is developed, so we're shown a bunch of romantic and comedic B-plots, and if I had it in me, maybe I'd go through those or at least offer a more thorough explanation of the main story. But at the end of the day, none of that matters - this movie isn't driven by plot. Hell, it isn't driven by its characters, either. This thing is mostly tone and humor, which...

Actually, let's back up and talk structure for a minute. The template this is using is lifted from When Harry Met Sally, one of the best romantic comedies made in my lifetime (maybe ever). The most obvious pattern is the use of time jumps, but it also tries mimicking the classic in another way: it wants its leads to come across as genuinely flawed people. Actually, that may be an overly generous interpretation of what happened here.

When Harry Met Sally works, in part, because its leads come across as not just flawed but somewhat unlikeable. More specifically, they're unlikeable within the world of the story. What that movie does that's so impressive is sell this without making them unlikeable to the viewer. If anything, we like Harry and Sally more because they're as quirky and offbeat as they are. We see our own insecurities magnified in them, and we want them to succeed.

Holidate gets as far as "unlikeable" and calls it a day. The characters in this movie don't act like loveable weirdos: they just behave like self-obsessed jerks who neither understand nor care about the world around them. They're vapid, empty shells of people with repulsive personalities. And, to be clear, this applies to virtually every character: leads, family, friends, exes, extras... you name it. It's a world populated with people you wouldn't want to know.

This is maybe - maybe - the movie's third or fourth biggest problem. Now then, let's discuss tone.

Largely because the characters lack much of a core, the movie feels somewhat cartoonishly simple. Tonally, it drifts close to made-for-TV entries in this genre which eschew emotional realism in favor of escapism. You know: simple, clean fun for the whole family. Okay, now take that and give it an R rating.

While these characters have the emotional maturity of a Hallmark movie, their vocabulary is closer to Bad Santa. They swear in front of kids, and they discuss ejaculate. The humor is largely of the shock variety: the punchline isn't what they're saying, but rather that something that crass is being said at all.

You're left with a tone that's completely disjointed. It's unmistakably childish, yet aggressively adult, almost to the point of parody. I think they were going for a Bad Moms vibe. I didn't think much of the movie I saw in that franchise, either, but I don't remember it being this painful to sit through.

Hell, maybe this was a parody in some earlier draft. The movie goes to great lengths to call out romcom tropes to mock them. That doesn't stop them from then using those or other tropes, but it at least wants you to think it's subverting them somehow.

This is a romantic comedy that wants to make fun of its genre, but still adheres to the formula. It makes no effort to create likeable characters or to give them believable emotions, but it still expects you to care that they get together in the end.

This is, in short, one of the worst scripts I've ever seen adapted as a romcom. Go ahead and take a minute to digest that statement, given some of the dreck we've reviewed here.

It doesn't help that this thing is horribly put together, either. There's a sequence early in the movie where the leads possibly engage in a sexual act that could be a classic fake-out, but the movie fails to communicate which it is (for those of you who have seen the movie, I'm referring to the Valentine's Day sequence, not the Cinco de Mayo scene, where it's supposed to be unclear what happened). It sort of feels like there was going to be a reveal the "reaction" was candy-related, but they either forgot to film or cut out the actual punchline, leaving you with a sequence that makes no sense yet should be fairly important to understanding their relationship going forward. This movie is a goddamn mess.

And it's really not even funny. Okay, there were a handful of moments that elicited a chuckle - this isn't entirely devoid of humor - but it's close. The only time I laughed out loud was a sequence where the main characters went grocery shopping in a nearly empty store on Thanksgiving (and I really don't think that was intentional).

In the interest of being complete, there are a few good things in this movie. Holidate does have an impressive cast, all of whom are better than the script. And for all its faults, the movie manages a handful of establishing shots that feel cinematic - you get the impression they were trying to make something that looked like an actual movie, and for the most part succeeded on that account.

Lastly, I should probably confront the wrapped elephant in the room: is this really a Christmas movie? On one hand, not really. Christmas serves as the start and end point, but the majority of the movie is spread out over the year. But that's the case with a lot of romcoms, and if Holiday Inn counts, this certainly has to, as well, albeit as something of an edge case.

Regardless of whether this is a Christmas movie or not, it's absolutely a bad one. Unless you're a fourteen-year-old who's been prohibited from watching R-rated movies your entire life, you're unlikely to get much out of the shock-value punchlines. And even if you are, there are far, far better options out there, so you can skip this one.