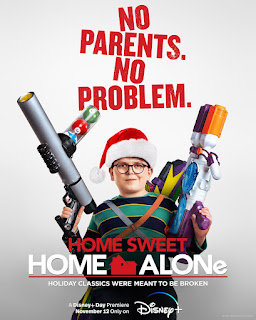 For those keeping track, Home Sweet Home Alone is the fourth official reboot of the series, as every installment after two has hit the reset button. For those of you who are new here, I should mention we're not big fans of the franchise. That doesn't exactly mean we consider the original bad - it's technically impressive, well shot and edited, and the score is fantastic. There are reasons it's lasted, and I respect it. Respecting a movie, obviously, isn't the same as liking it - none of the earlier Home Alone movies work for me.

I wasn't sure what to expect when I heard Disney was going to update the property. A simple remake would have been a hard sell, and they already tried most of the other permutations. Movies 3 and 5 attempted variations on the same premise with new characters, and movie 4 was a loose continuation with a recast Kevin.

Home Sweet Home Alone is closer to 3 and 5 - we've got a new lead and new thieves in a familiar situation. This is technically set in the same world as the original two movies, thanks to a bit part for Devin Ratray, who returns briefly to reprise his role as Buzz and catch us up on what Kevin's been up to. Honestly, this is basically an Easter Egg, though it helps offer a slightly better explanation for why the police aren't involved than the original ever managed.

In one sense, the movie's premise is more or less what you'd expect: you've got a kid left home alone after his family accidentally went on vacation without him, and a couple thieves are trying to break in. The difference is mainly a matter of POV: this time, the thieves have equal - arguably greater - claim to the label of protagonist.

See, the thieves - Pam and Jeff - aren't really thieves. They're a couple whose family is going through hard times. They're likely going to lose their house, a fact they're keeping from their kids. Then, like magic, a Christmas miracle appears when Jeff learns a doll he inherited from his mother is worth hundreds of thousands of dollars. Only the doll's missing following a random encounter with a kid he didn't get along with.

That would be Max, the movie's Kevin analog. I won't take you through the details - suffice to say Jeff has a good reason to believe Max was behind the disappearance. He also has enough info to track the kid down.

He does not, however, initially have the guts to break in, despite having an absurdly perfect opportunity. He enlists Pam, and the two of them begin an escalating series of attempts to both work up the courage and find an opportunity to get Max's coat, which they believe holds the item. Meanwhile, Max misinterprets some things he overhears as plans to kidnap him and sell him to an old lady (don't ask).

In short, we've got a classic comedy of errors where everyone's motives are based on misconceptions. Pam and Jeff don't even realize Max is home alone until the end (we'll get to that in a moment). First, the maze of death, because if there weren't one of those, we'd probably be watching something in a different, better franchise.

Depending on where you stand on that franchise, as well as your tolerance for violence, this section may either appeal to you or repulse you. Despite making the thieves sympathetic, they don't tone down the brutality of the traps much. Jeff and Pam go through a lot. Maybe not quite as much as Harry and Marv, but in the same ballpark. Max tortures them, and they don't know why. They just want their doll back.

Then, finally, after the traps are exhausted, they get him to talk, something they were trying all along. And in doing so, they realize he never took the doll, he thought they were trying to kidnap him, and he's alone. And he learned they weren't after him, at all.

And because Jeff and Pam aren't horrible people, they bring Max home with them for Christmas and call his mother, who's most of the way back home by that point, anyway.

The doll materializes thanks to one of many subplots I didn't mention, and the money is enough to save Jeff and Pam's house AND repair Max's. Skip ahead a year, and the two families are celebrating together.

I can't say I was surprised by the ending - it was pretty clear where this was going early on - but it was easily my favorite sequence in the movie. I'm not saying it was stellar filmmaking, but I think the drama felt believable. It also had a few jokes I found genuinely funny, and there are very few scenes that managed to clear that bar.

Building this around the thieves is interesting from a structural perspective, and in more ways than one. We've discussed our unease with the themes of the original in excruciating detail. Suffice to say, we're not alone in considering the original movie something of an unofficial horror movie with Kevin as the monster. I suspect the writers had a similar thought and decided if the kid is the monster, his victims should probably be the protagonists. If you're skeptical of the horror angle, you can reach the same conclusion with Kevin/Max as the Roadrunner and the thieves as the Coyote. Alternatively, you could view this as an acknowledgment the fans of the original have grown into adults with families of their own and need point-of-view characters to empathize with.

More importantly, this corrects a long-standing thematic issue with the series. In theory, Home Alone was always supposed to be about the value of family, including found family (e.g.: Marley, the Bird Lady, all those characters I don't recall from Home Alones 3 through 5). The original movies always set that aside for the maze of death, which - let's face it - is really the core of the movie. By allowing Max and Jeff/Pam to come out of the maze as a found family, the movie kind of threads that needle.

It also allows the theme to go a bit further than we've seen before, though I'm not entirely certain how much was intentional. The movie features extended families for both Max and Pam/Jeff. Max's family is trimmed back compared to their role in the original (his mother's adventures are likewise reduced, which feels like a bit of a missed opportunity - it's almost certainly the best aspect of Home Alone 1). Pam and Jeff's, on the other hand, is fairly substantial. But in both cases, the extended family dynamic is mainly toxic. Debatably that was the case in the first movie, as well, but here it feels less zany than serious. The movie portrays the extended clans as incompatible with the main cast. When we jump ahead to the following Christmas, the relatives are gone - it's just Max's family and Pam/Jeff's. I'm not sure the takeaway was supposed to be "it's okay to cut loose toxic familial relationships in favor of found family," but it certainly felt that way. And, honestly, it was a little refreshing.

All of that kind of adds up to a solid foundation to build the movie on. A foundation that is unfortunately completely and utterly squandered.

Yeah, sorry, this isn't actually good or anything.

The largest problem is the same one that's followed this franchise from its inception: the jokes aren't funny. As I mentioned above there are a couple counterexamples, but they're few and far between. The outline is good, but the actual filling that represents the meat of the movie isn't.

A larger problem for the movie's chance at longevity might be the side-effects of shifting the focus away from Max. Whether or not it appeals to me personally, Home Alone's legacy is largely due to that movie's ability to connect on a wish-fulfillment level with younger viewers. It's a fantasy that allows them to live vicariously through Kevin as he enjoys a level of freedom kids dream of, before shifting into a power fantasy where Kevin is able to fend off aggressors.

There's a little of that in here, but I suspect not nearly enough to maintain kids' attention. There are a few sequences showing Max enjoy his freedom, but they're fleeting and brief. As for the power fantasy, it's present but the fact the characters being subject to Max's machinations are sympathetic undercuts the appeal (at least I hope it does - otherwise, I'm giving kids too much credit).

Ultimately, with the central structural problem at the core of the Home Alone franchise corrected, we're left wondering whether there's still a reason for the movie to continue existing. I'd argue the central story is better here than in Home Alone 1, but in the process, the movie gives up everything that made the original a success.

With that out of the way, let's touch on a handful of details, starting with the reappearance of Buzz, now a cop working in the same town he grew up in. His presence is a fun callback, and more importantly we get a little info on Kevin, who apparently owns and operates a home security company, which... yeah, that checks out. Also, every year he torments his brother by calling in a fake "kid left home alone" report. Setting aside the fact that's a felony, it's a fun detail that - again - feels right for his character. It's a little odd the filmmakers either didn't try or couldn't manage to get Culkin back for a cameo, but Buzz's inclusion is already one of the film's better choices.

I haven't said much about the cast yet. Overall most did a decent job, albeit with a few odd choices. Max is played by Archie Yates, who has a strong British accent. The movie handwaves this by giving his mother a similar accent and alluding to them having moved from England, but it's an odd choice that feels a little distracting. It's also a bit strange the movie didn't bother using the reboot to deviate from the tradition of rich, white, male leads that define the series. This isn't a flaw so much as a missed opportunity.

The movie's MVP is Ellie Kemper's Pam, who is both the most comedically interesting and emotionally believable character in the movie. The limited extent that the movie works is mainly thanks to her.

One other surprise for me was how little a role the holidays served. The movie was still set over Christmas, and various yuletide activities created obstacles for Pam and Jeff, but these came across as oddly hollow. I got the impression they were background elements retained for continuity - nothing really delivered the thematic resonance and tonal juxtaposition Christmas provided the original.