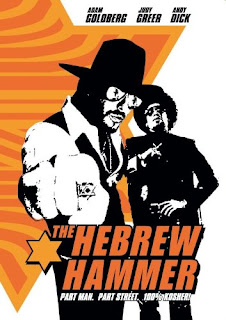 When we talk about movies from the 1940s or 1960s, we often fall back on the adage "it was of its time" as sort of an explanation for problematic content or offensive cultural norms that have since evolved. Today, I want to look at a comedy from 2003 that I believe was "of its time."

Comedy at the turn of the millennium was largely dominated by two titans. On television, South Park had achieved almost unimaginable success by combining crass humor with rough animation. Meanwhile, Austin Powers continued to cast a long shadow across film.

If someone in 2003 were to attempt to replicate surface-level properties of those two franchises without actually understanding what made either work, you'd expect the result to be something very similar to The Hebrew Hammer, an independent production that wound up getting a heavily edited release on cable television.

The movie's title character is more or less an attempt to answer the question, "What if Shaft were Jewish?" The movie is a parody/homage of blaxploitation in the way Austin Powers was mimicking 60s spy movies. The Hebrew Hammer is a badass, orthodox Jewish private detective.

The plot of the movie centers on the antisemitic son of Santa Claus murdering his father, ascending to the title, and attempting to destroy Hanukkah. Honestly, I feel like calling this the movie's plot is misleading, since the movie isn't really driven by story or even character. Instead, each scene is structured as a self-contained comedy sketch. The goal is always to do something silly or absurd, rather than to move the story forward. As a result, the story just kind of lurches from sequence to sequence.

And the strategy of those individual sketches is to make the audience laugh by saying something offensive.

I told you South Park was relevant.

Only South Park, for all its faults, generally does something with its content. It tells stories while it offends. It builds themes and explores ideas. There's room to debate whether it does so in a responsible manner, whether its influence has a net positive or negative effect, and even whether it deserves to be called good or bad, but at the end of the day, it's more the sum of its poop jokes and ironically antisemitic characters.

The Hebrew Hammer, however, is just a bunch of skits. Although those skits are strung into a thinly defined plot, the actual elements of what defines a story are incomplete. The movie plays like something a computer generated after being exposed to hundreds of real films.

For example, early in the movie, the Hammer is told how important his mission is to the survival of Hanukkah. He reacts poorly, freaking out at the pressure. This occurs a few more times through the film, with the same result. So, they've established a character flaw, and they've reminded the audience about that flaw. Now we just need to wait for the payoff, and... it never materializes. Apparently, those were just throwaway jokes about Jews and pressure.

Likewise, the movie opens with a flashback to the Hammer's youth, when he felt surrounded by Christmas at school and in public. This culminates with Santa Claus stomping on his dreidel, shattering it. If you're thinking this goes somewhere, think again. The character doesn't have a bad relationship with Christmas, and - somewhat inexplicably - this isn't the Santa who gets killed at the beginning of the movie. Between that Santa and the villainous one, there was a kindhearted, culturally sensitive Santa who knew the Hebrew Hammer. So... what's the point of that prologue? Did they film it before writing the rest of the movie?

The closest thing we get to an actual story centers around the romance between the Hebrew Hammer and the daughter of the leader of the Jewish Justice League (which is not as interesting as it sounds). It's forced and driven by jokes, but at least the conflict - that she secretly made a deal with his mother she'd sleep with him if his mom tricked him into taking the case - was established in advance.

And if you're staring in utter horror at the fact I just presented that plot point as one of the better handled story beats, perhaps you now have an idea of the kind of movie this is.

The movie's structure is of course not unique. This is a farce, and it can be done well (Monty Python being a prime example). But if your entire movie consists of standalone sketches, the quality of that movie is going to sink or swim on the quality of those sketches. And these, for the most part, weren't that good.

To be fair, there were exceptions. The movie would occasionally stumble across a joke or idea that worked. But even here it rarely stuck the landing. Instead of finding something else funny or meaningful to follow it up with, the movie almost always runs it into the ground like an SNL sketch.

Take what's written on Hammer's door, for example: "Certified Circumcised Dick." I'm not saying this pun is high comedy, but as a throwaway gag, it's fine. Only they don't just drop it and move on. This line gets referenced and repeated several times throughout the movie, usually by the love interest, and each time gets more annoying.

If there's one area where the movie shines, it's in its casting. For all its faults, there's some surprisingly solid talent in this thing. Judy Greer plays the aforementioned love interest, Andy Dick is the evil Santa Claus, and Adam Goldberg plays the lead role; if the movie had known how to use them, I feel like this could have been something worthwhile.

I said at the start this movie was of its time. It feels like a regurgitation of Austin Power's formula filled with offensive jokes about stereotypes. The jokes weren't intended to offend, of course - they were intended to challenge social mores on what was perceived as acceptable comedic topics. This was common in the early 2000s, and a lot of people - myself included - believed it was an acceptable direction for comedy to go in; we thought unimpeded free speech without risk of cultural backlash would result in a more relaxed society. I think it's obvious we were dead wrong, but that's a topic for another time.

Because if you're challenging cultural expectations and mining comedy from sensitive subject matter, you really need to knock it out of the park. Otherwise, you wind up making something with virtually no redeeming qualities.

Like I said, in 2003 I was far more open to this style of comedy. That was also the one year of my life I had constant access to cable television, and I recall watching this when it aired on Comedy Central. However, I didn't find this funny then, and it's not funny now.
00's Erin Snyder Hanukkah Movie