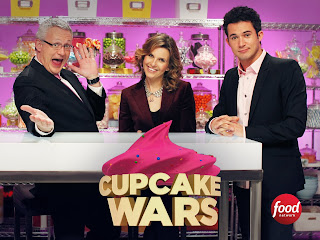 Cupcake Wars is a food competition show. I watch, let's be honest, a decent number of food competition shows, and I place this one squarely in the lower-middle tier of such fare. It’s fine background noise that’s somewhat entertaining, but it lacks the theatricality of shows like Cutthroat Kitchen or Beat Bobby Flay, the impressive flexibility and talent on shows like Chopped or Iron Chef, or the personal drama of shows with a continuing cast like Great British Bake Off or even Next Food Network Star.

Even so, it is amusing enough to pass the time with when tied to the couch under a feeding baby. On my maternity leave earlier this year I watched a lot of reality shows, including two Christmas-themed episodes of Cupcake Wars. In this show, people who make cupcakes professionally (most either own a cafe or do catering) try to outdo each other to win a cash prize and a contract for a specific fancy event. In these episodes, said events were the opening night of the New York City Ballet production of the Nutcracker, and the Hollywood Christmas Parade.

The format is familiar: four contestants and three rounds, with one contestant eliminated after each round. In this case, the scale of the challenge also increases for each round. The first round asks for one cupcake that tastes great and is based on certain themed parameters. The second asks for three types of cupcakes that taste great and look spectacular. The third requires the bakers to design a display for a thousand-cupcake presentation matching the event.

The cupcakes are judged by two consistent judges with strong baking bona fides and one special guest who represents the special event. There’s also a host who keeps time and provides commentary that aspires to humorous but lands on blandly inoffensive. 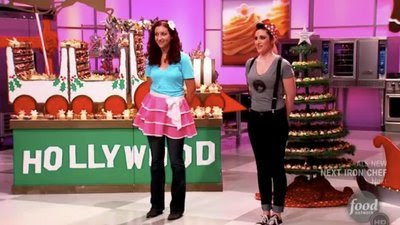 Each baker comes with one assistant, and each team wears a matching outfit, either colorful shirts or aprons, or somewhat silly costumes, such as tutus and hair bows.

The Nutcracker episode was briefly notable because there was arguably some sabotage. One baker noticed that another's oven wasn't closing properly, but didn't point it out. The second team couldn't figure out why their cupcakes weren't cooking right and were eliminated in that round. The first team went on to make a much classier display than their final opponent in the last round and won.

The cupcake flavors and decorations for the Nutcracker cupcakes were fairly standard; they had the "Land of Sweets" aesthetic to work with, after all. The Christmas Parade episode pushed the bakers a little harder, at least in the first round, making them create cupcakes inspired by savory holiday dishes like cheese logs and casseroles.

The most notable thing about that episode, however, was the guest judge. I don't know whether he was long-winded or inappropriate in the studio, but the clips of his reactions to the various cupcakes were weirdly clipped, as though the editors had trouble finding a good sound bite.

In fact, in the last round, the same clip was used as his reaction to both contestants' final displays. I mean, he might have just said the same thing twice, but I went back and forth a few times and it really looks and sounds like the same clip.

For holiday-themed background noise while you're cooking or cleaning, you could stick these episodes in a queue with other holiday cooking competitions, but there's really no other reason to seek this out.
2011 Episode Lindsay Reality