Book Review: The Christmas Card Crime and Other Stories 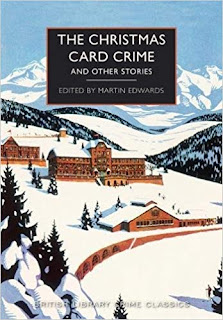 The Christmas Card Crime and Other Stories
Edited by Martin Edwards, compilation 2019 (US release)

Premise: A new collection of little-known stories with a holiday twist from the classic age of crime fiction from British Library Crime Classics.

Like most short fiction collections, this one is hit and miss. Some of these stories are fun, but none of them are exceptional. Several introductions mention that the author rarely wrote short stories or seldom wrote mysteries. Apparently, this is the third collection from this publisher collecting unknown British crime stories on a wintry theme. What I'm trying to say is, they might be scraping the bottom of the barrel at this point.

The first story is by Baroness Orczy of Scarlet Pimpernel fame, and the characters are a lot of fun, although the plot is somewhat lacking. Two of the best stories in the volume follow: “By the Sword,” a tale in which a murderer is undone by fate, and “The Christmas Card Crime,” a solid story with a good balance between character, mystery, and action.

“The Motive” features a cute puzzle, but the ending is lame and the story has too much extraneous material for how thin the plot is. “Blind Man’s Hood” is a gruesome ghost story with a nice style. “Paul Temple’s White Christmas” felt unfinished, a vignette without a true ending. “Sister Bessie” (Also published as “Your Old Leech”) is a dark noirish tale of bad people behaving badly.

The two that follow that are too simplistic in both plot and style to be worth much (I thought the second would be an admirable student project, but that's all). Finally, “Crime at Lark Cottage" features some good red herrings before the end, and "’Twixt the Cup and the Lip" was a fun caper story about a misadventure of venal men.

Overall I was left diverted, but not ever transported. The stories ranged from okay to quite good, never breaking into great.