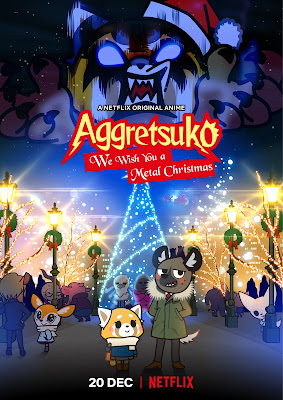 Aggretsuko is an anime series I quite like based on a Sanrio character. Yes, that's the Hello Kitty company, but with this character they are shifting their target consumer fairly significantly - from young girls to adult women dissatisfied with the modern world. The lead character, a red panda named Retsuko, has a boring job with a chauvinist jerk for a boss, annoying co-workers, and no romantic prospects, so she releases her rage at the world through singing death metal at a karaoke bar.

This Christmas special is an extra-long episode that doubles as an epilogue for the first season, so I'm not sure how enjoyable it would be to watch without that context. The main plots of the special are Retsuko's attempt to seek validation by becoming popular on social media and her coworker Haida's continuing crush on her.

At the beginning of the special is a missing scene from the end of the prior episode that reveals that Haida did ask Retsuko out, but she turned him down, at least for now. Time passes, and Retsuko is trying to find popularity on Instagram under the advice of her fashion-conscious coworker Tsunoda. Meanwhile, their more cynical coworker Fenneko judges her harshly for seeking "fake" attention and tells Haida that Retsuko will inevitably become addicted to the attention and start posting more and more expensive or revealing pictures to keep the "likes" coming.

Fenneko isn't wrong. Retsuko starts going out of her way to take cute pictures, only to panic when she realizes she doesn't have any Insta-worthy plans for Christmas Eve and everyone else is busy. Haida wants to ask her to a party, but is too cowardly to do so.

Christmas Eve rolls around, but even if Retsuko had plans, they would have been derailed when her boss dumps a bunch of last-minute work on her.

Her frustration with being alone on a special day and lacking the online validation she craves, Retsuko screams/sings out her anger and leaves work. At a bar, Fenneko and Haida see the photo she soon posts of what appears to be a romantic dinner. Haida despairs until Fenneko points out that the picture is obviously fake, staged with supplies bought at a convenience store.

Haida races back to work, hoping to run into Retsuko, but she's finally left. In fact, she's been panda-napped by her friends Washimi and Gori, who both had dates for Christmas Eve that ended up going badly.

Washimi and Gori suggest they make a girls night of it, and Retsuko is excited until they don't do anything fancier than stop for cheap noodles. However, she realizes that even if it isn't as special as she imagined, it's still worth celebrating with friends and making the best of it.

She posts one more time to Instagram about satisfying noodles without bothering to stage a fancy photo, and Haida catches up with her outside the noodle place and walks her to the train.

I enjoyed this special, but it does sort of undo some of the character growth that was implied in the last episode of Season One. Other than that, it was funny and snarky and a decent thing to watch while waiting for Season Two.
2018 Anime Comedy Lindsay Special