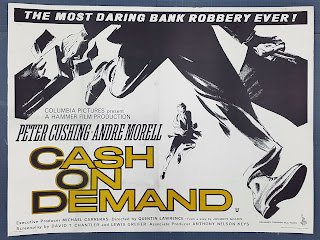 It's a few days before Christmas and bank manager Harry Fordyce (played by Peter Cushing) is making his employees' lives hell. It's not difficult to see the connections between Scrooge and Harry - hell, it's impossible to miss them as he quibbles over every trivial discrepancy and outright ignores their planned holiday party.

Instead of a ghost, he gets visited by a robber masquerading as an insurance investigator. The thief reveals his true identity to Harry and also tells the manager why he should cooperate: his conspirators have abducted Harry's wife and son and are threatening to torture them. If Harry wants them released safely, he'll have to ensure the robbery goes off without a hitch.

The movie is set almost entirely inside the bank, as Harry is forced to help the criminal outmaneuver his own security protocols. But in the process, Harry also realizes the same lessons Scrooge did a century earlier: that people matter more than money.

It turns out the thief faked the hostages - his wife and son were never in any danger. The movie ends with him getting captured despite Harry's efforts, then opting to admit that - despite an overwhelming amount of evidence to the contrary - Harry wasn't working with him. Finally, Harry makes amends with his employees.

The ending, while thematically consistent with the source material, was a little underwhelming, but that's only because the rest of the movie was suspenseful and intriguing. This is a fantastic movie, but I'm even more interested in its connections to a Christmas movie it seems to have helped inspire. A little something that came out in the 80s you might have heard of called "Die Hard."

About halfway through, Harry calls his adversary a "common thief." This amuses the antagonist, who replies, "I flatter myself I'm a rather uncommon thief." The line, of course, is almost quoted by Hans Gruber, who is also a thief hiding his true identity. Both men are brilliant, though a bit arrogant.

I realize Die Hard is adapted from a novel, but I also know there were quite a few changes made to the premise. I can't find verification of a connection, but it's difficult to ignore the parallels.

General consensus already seems to have (correctly) decided Die Hard should count as a Christmas movie, but this offers yet another important connection. Cash on Demand serves as something of a missing link between Scrooge and Die Hard.

Structurally, Die Hard works as a reimagining of A Christmas Carol, with McClane forced to address and fix his relationship with his wife over the course of Christmas Eve. But this is only one element of the film, making it easy to discount. However, if it's heavily inspired by Cash on Demand (and I think there's a very good chance it was), then it has a very direct connection going back to Scrooge.

Regardless, Cash on Demand is a great movie in its own right. Cushing's performance is phenomenal, and Andre Morell's work as his nemesis is likewise fantastic. This is a forgotten gem of a movie that's worth the (admittedly absurd) amount of work needed to track down a copy.
60's Crime Drama Erin Snyder Highly Recommended Movie Noir