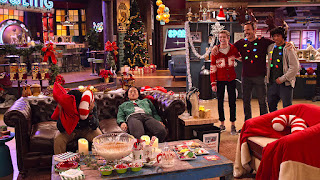 Prince of Peoria is a new Netflix series attempting to replicate the formula of Disney's tween-focused sitcoms. Which means, right off the bat, it's going to be bad. That being said, it's sort of trying to be bad, so that makes it... still bad, but maybe successful?

The premise of the series - at least insofar as I've been able to tell - is that the teenage prince of a fictional island nation is roommates with an American, and they're living together in a bowling alley. So... Perfect Strangers meets Coming to America meets Boy Meets World.

It's certainly ambitious - and bizarre. Tonally, it's mostly farcical due to the absurd customs of the titular prince. In addition, he's accompanied by a bodyguard of... questionable mental ability. Actually, several characters are played as comically idiotic.

The series sidesteps a lot of issues by casting white actors using British accents as the exotic foreigners and a diverse cast as the Americans. Using British as a stand-in for strange, made-up countries is a trope we're all too familiar with, but it's certainly less problematic than the reverse.

This episode (ostensibly a "special," but on Netflix that seems to mean they set an otherwise normal episode aside and listed it separately to get more attention) focuses on tensions that arise from differences in Christmas traditions. Specifically, the Peorians believe in a magical flying moose who eats cabbage, craps chocolate, and grants wishes. Meanwhile, the American, Teddy, wants to go see some Christmas lights, but is thwarted by a snowstorm. Eventually, he tells Emil (the prince) the magic moose doesn't exist, and everyone's sad. Then the magic moose shows up, decorates the bowling alley, poops out some chocolate, and flies away. And everyone's happy again.

That's most of the plot, though I glossed over a few side notes. Teddy's mom spends the episode trying to find a present for the bodyguard, someone whose relationship to the others was never clarified freaked out due to the snow and hoarded food, and there was a monkey for some reason.

Basically, they threw weird stuff at the screen for thirty minutes, followed a tired formula building to a forced emotional conflict (Teddy's father used to take him to see the lights - that's why they mattered), then closed on a shot of a flying CG moose.

Which is... okay... not to belabor the point, but bad. But that's the selling point, right? The target audience for this is kids who haven't seen a hundred sitcoms and don't know who Monty Python are. This is safe, inoffensive TV delivering "weird for the sake of weird" to an audience too young to know this is a very old formula.

And the delivery is... passable, I guess? The jokes are mostly stale, and the laugh track (of course there's a laugh track) does nothing to make them better. But a few of the actors have good timing, particularly when it comes to physical comedy, and a handful of recurring gags pay off by the end.

I certainly didn't like this, but I didn't hate it, either. Ultimately, it seemed fine for its target demographic; the rest of us should ignore it.
2018 Comedy Episode Erin Snyder Special