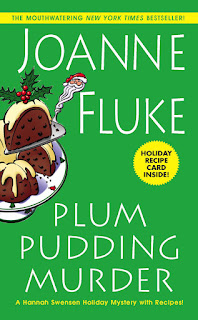 I have been known to pick up Christmas-themed books on the cheap pretty often and this is one of those cheap reads. It's another cozy mystery, and this one not only reads like a Hallmark movie, it was turned into a literal Hallmark movie.

It's the twelfth book in this series, so while all the backstory and name-checking earlier events and established relationships is boring, it's at least excusable.

Okay, I said it was a cozy, right? Let's check off the tropes: Hannah owns a cookie shop, is dating a law enforcement guy, and is known to stumble into murders. I was briefly intrigued by the fact that she is also dating a dentist and all three parties seemed happy enough with their relationships. It seemed like a sympathetic portrayal of people who didn't feel the need to lock down a monogamous heterosexual marriage and were comfortable with that. Of course, later the guys both showed little jealousies, and the narrative clearly conveyed that one love interest was better for her than the other.

In any case, the plot is simple enough: there's a new Christmas tree lot in town that is more like a mini holiday fair. It sells trees, but also has food and gifts and rides. They contract with Hannah for cookies, and in her visits there she notices some weird business practices and discrepancies with what she's being told by various people. Then she comes by late one night to pick up a check and finds the guy who runs the place has been murdered.

Cue a great deal of investigating and running about. Further shady business practices (and a shady romantic history) come to light and several people seem to have motives to see this guy dead. Hannah is randomly the one with all the pieces of the puzzle, however, because she attended a small business class with her mother the week before.

She tries to get some evidence for her theory, but pursues getting this evidence IN FRONT OF HER SUSPECT when there was an easy way to make an excuse and get it later. So she ends up getting shot at and barely escaping down a snowy hillside. Cop boyfriend ex machina kills the killer. The scene was exciting and decently done, but I couldn't stop thinking she was dumb for ending up in that situation and the final resolution was unsatisfying.

Here's the weirdest thing about this book: I've read cozy mysteries that include recipes before, but the number in this was insane. It literally read like a cookbook with scenes from a mystery shoved in awkwardly. This isn't helped by the fact that in every scene the characters are talking about food or preparing food or eating food to justify the inclusion of all those recipes.

It would be one thing if the descriptions of the food were really interesting, but they just aren't. I've read books that describe meals or banquets in a way that helps the story or sets the scene or illuminates the characters. These characters were just props to carry the food. Why does this busy professional baker have time to test and demo so many new recipes during the Christmas rush?

The actual narrative scenes that weren't just food showpieces were quite well-done, though. The story was complicated enough without being confusing, the characters were (for the most part) unique without being too ridiculous and over-the-top, and the various scenes were decently constructed.