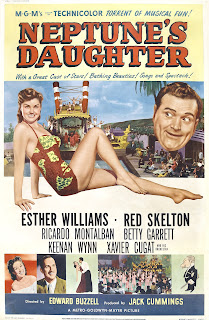 This is not, by any reasonable definition, a Christmas movie, but we're going to cover it anyway. Why? Because while Neptune's Daughter isn't a Christmas movie, it had a significant impact on Christmas tradition, namely by introducing the song, "Baby, It's Cold Outside" to the world.


Baby, It's Cold Outside has been debated heavily in recent years, and this year's no different. It's arguably become the single most controversial holiday song in existence. Rather than retread points others have made, I thought it would be interesting to go back and actually look at it in its original context.

Okay, this wasn't actually its original context. Before being sung by Ricardo Montalban and Esther Williams on the big screen, it was sung privately by Frank Loesser and Lynn Garland at dinner parties. If anyone has a time machine I could borrow, I'd love to go back and hear it performed in that context, as well. I'll also need to borrow a tux. And a convincing looking invite. And probably a more sociable personality.

At any rate, Neptune's Daughter was the first time Baby, It's Cold Outside was seen by wide audiences. And given how much subtext, body language, and inflection transform the meaning of each interpretation, I wanted some idea for how it played in context. And the answer was, well... still kind of complicated.

First, let's talk about the movie around it. Like I said, there's nothing remotely Christmas-themed about the premise. It starts with the narrator, Joe Backett, introducing himself and Esther Williams's Eve Barrett. She's a professional swimmer Backett enlists as a partner for a swimwear company. After a quick time jump, we learn they've had a great deal of success and are trying to expand. This brings them into contact with a polo event featuring a South American team.

This introduces us to our male leads, Montalban's Jose O'Rourke and Red Skelton's Jack Spratt. O'Rourke is the captain of the South American polo team, while Spratt is a masseuse who's never been on a date in his life. The two meet briefly, and Spratt comes to the conclusion he'd have better luck with women if he acted more like O'Rourke.

He gets his chance to test this when he meets Betty Barrett. Unlike her more successful sister, Betty is fixated on men - when she hears a South American polo team is in town, she jumps at the opportunity to date the team's captain. Only she winds up seeing Spratt and thinking he's O'Rourke. Rather than tell her the truth, he plays the role to spend time with her.

When Eve hears her sister's seeing the captain of the team, she arranges a meeting to tell him to back off. Of course, this results in her meeting O'Rourke, who's never even met her sister. When Eve refuses to believe him, he instead offers to stay away from Betty on the condition Eve agrees to see him.

This, of course, spirals further and further out of control. Each man proposes, the sisters agree, Eve is heartbroken when she thinks O'Rourke is playing some sort of game, and a gangster wanting to fix a match gets involved. He tries to kidnap O'Rourke, winds up with Spratt, sends more of his men to grab O'Rourke, Spratt escapes and has to play in the match... Of course, everything gets sorted out in the end, the gangsters get arrested, and both couples end up together.

The movie isn't entirely bad, but it certainly comes close. Red Skelton's antics make up a lot of the runtime, and they haven't aged well. He does some impressive physical comedy, but it's mostly just boring in hindsight. Some of the comedy going on in the A-plot holds up better, in part because Williams isn't a pushover. She's given quite a bit of agency in the film, as well as the will to impose it. Likewise, Montalban earns some laughs - they're good onscreen together.

But of course, Montalban's O'Rourke isn't the only Hispanic character in the movie, which leads us to one of the movie's biggest issues: racist stereotypes. Yeah, it's at least as bad as you think - over-the-top accents, recurring jokes about "simple" ranch hands not understanding English words or concepts, gags about Spratt pretending to be South American... you name it. To be fair, Montalban's presence undercuts all that a bit - his character isn't the butt of racist jokes, and he's clearly supposed to be the embodiment of the perfect man.

So. You may be wondering how "Baby, It's Cold Outside" fits into any of this. And for the most part, the answer is it doesn't. The song is somewhat wedged into the middle of the film in a sequence that makes very little sense in context. It wasn't originally even supposed to be in the movie - it was a late substitution when the producers cut another planned song. And it shows - the lyrics are completely out-of-place in this setting. There's no snow, no blizzard, and no indication it's all that cold outside. But the characters sing the song anyway, as if they'd just teleported into a different film.

This occurs when Eve is told her sister is out on a date with O'Rourke after he gave his word to stay away from her. She goes to his apartment to confront them, only to discover her sister isn't there (since she's of course with Spratt). O'Rourke convinces her to stay for a drink, and the song starts up.

As soon as their duet is complete, the film cuts to Betty and Spratt and the song starts over. This time, though, the gender roles are reversed: Spratt's the one who's anxious and trying to end the night, while Betty wants to stay. This is a slightly different version, incidentally - the lyrics are altered to incorporate his character's feigned mannerisms.

Now then. Let's try and unpack this.

Remember what I said earlier about different versions of this song having different meanings? I think that's important because there's quite a range. There are versions where the sexuality is played down to the point it's essentially a song about one character fairly innocently convincing another to stay at a party a few minutes longer. And, of course, there are versions which are indefensible as anything other than songs celebrating date rape.

And while these versions aren't at the far end of that spectrum, they're certainly problematic. Taken at face value, the most charitable interpretation of Baby, It's Cold Outside starts with the assumption both characters are essentially playing a game, and both understand and are moving towards the same goal. There are ways to sing the song that more strongly imply or reject this interpretation. The versions in this movie, though, make it pretty clear that the two characters in the "Mouse" role actually want to leave. This doesn't mean they don't change their minds by the end of the song, but their initial desires are ignored.

The Montalban/Williams version is a little better, in part because it's less clear anything happened between the two characters. It's still presented as a manipulation, with Montalban's character pressuring Williams to stay with him, but the conclusion is friendly and subsequent scenes seem to imply nothing physical happens after the camera cuts away.

The other couple, however, pretty obviously resolves with the two characters sleeping together after Betty pressures Spratt to stay. She's quite a bit more forceful, too - she more or less strong-arms him a few times (though it's pretty clear he's consenting by the end of the scene).

Ethically, it shouldn't make any difference that it's a woman playing the Wolf, but I'll admit it feels more acceptable to me, largely because of the era this was released. Granted, the song's still being used to make light of one character ignoring the other's wishes, but it's also being used to allow a woman to explore her sexuality without judgment. I'm not claiming the one makes up for the other, but it's unusual to see this level of control being given to a female character in films from this decade. Still, I certainly wish it was presented in better circumstances.

I should mention it's also extremely problematic this is all happening while Betty believes Spratt is someone else, but that's mostly a separate issue of informed consent beyond what's going on in the song.

Ultimately, the use of the song in the context of this movie is similar to its use since: ambiguous. In a sense, it did something wonderful in breaking down gender roles and social assumptions. It did this again later in 1949 when Bing Crosby and Jimmy Stewart sung a truncated version together (to be fair, it was pared down to remove any hint of romance, let alone sexuality). There are strong defenses for the song due to its historic use. I've found no better argument towards that end than this one.

But, frankly, there are a few moments in the song that reflect cultural ideas that need to change. If the song has helped culture evolve in a few respects, that's wonderful, but we need to acknowledge that the ideas in the song are now fundamentally regressive.

The lyric, "The answer is 'No,'" isn't acceptable now and - frankly - shouldn't have been then. As for the much-debated "What's in this drink" (seriously - Google that argument if you ever have 98 hours you want to kill online): even if we accept it was innocuous in 1949, it's meaning for decades has been unambiguously sickening. When I first paid attention to the song's lyrics a decade or so ago, I was horrified until I looked up some context. It's not reasonable to assume teenagers hearing it will take it at anything other than face value.

I actually like this song quite a bit - as a playful, back-and-forth duet, it fills a niche no other holiday classic occupies. But I've come to think radio stations dropping it from their holiday lineup are making the right choice, and I hope more do so in the coming years.

Maybe it would be a good time for songwriters to work on new romantic Christmas duets. There's nothing wrong with cycling out old tunes and making new traditions, especially when the old ones are as morally compromised as Baby, It's Cold Outside.
40's Comedy Erin Snyder Movie Music Not Christmas