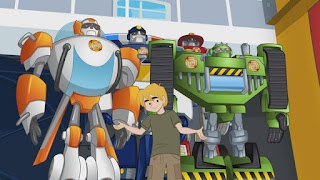 Picture us sitting on the couch, trying to figure out what in the heck we’re watching. It’s ugly flash animation, it’s hard to follow, the writing seems to have been dashed off by a middle schooler pressed for time.

I don’t have any huge historical fondness for Transformers as a franchise, and even I can tell something is terribly wrong. Apparently this is a series about the loser bots who couldn’t make the cut, and Optimus Prime found a backward town to dump them in so they could learn to be subservient to humans.

It’s funny because I wrote that as a joke, but I just looked up the premise of the show, and it’s basically that.

So in this episode, the kid (there’s always a kid) is teaching the robots about seasons, because they’re space-faring life forms that somehow don’t understand orbits and weather. It’s summer and very hot, and one robot asks why they can’t have snow in the summer.

Cue lightbulb. The kid goes to visit a guy who is apparently the local mad scientist? There are a bunch of inventions that it’s implied he didn’t create, but were left behind by someone else, and the doctor says, sure there’s a weather machine, it’s back in the section for stuff we shouldn’t touch, I’ll get it out for you.

Long story short, the kid assembles the town for a little Christmas in July, the weather machine obligingly makes snow until it breaks and makes a blizzard.

This is about when Erin and I realized we didn’t understand the relationship between the robots and the town. They seem to just be standing there during all the town stuff, are they really “in disguise”? Wikipedia loosely confirms that except in front of the kid and his family, they are pretending to just be super-advanced transforming robots, not intelligent super-advanced transforming robots. Because that is totally something that people would just accept.

Most of the “tension” in the rest of the episode concerns things like plowing roads and getting snow off a roof by using a helicopter in a highly improbable way. Then a robot saves the friend of the kid (said friend is one of only two female characters with lines that I spotted) by learning to throw a snowball. Really.

Apparently other episodes have actual plot, but I am never going to find out for sure.

The Rescue Bots are supposed to learn from the humans and hone their search and rescue skills. I guess it’s supposed to appeal to little kids’ fascination with fire trucks and bulldozers. On the other hand, if the lesson the bots eventually learn is not to trust the humans who take them for granted and order them around, that instead they should ally with Megatron, someone let me know.
2012 Christmas in July Episode Lindsay