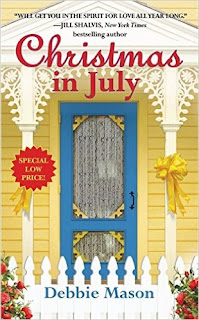 Romance isn’t a preferred genre for me, but sometimes I like it, and this book was available through my local library, so I decided to dive in.

At the beginning, I was intrigued. The book (and, I imagine, the series) takes place in a town called Christmas. The main character, Grace, is a baker. Her signature dessert is a Sugar Plum Cake with a “wish” hidden in the decorations. Her husband, Jack, was in the army, but he’s been MIA for over a year, and she’s finally decided to move on.

So far, a nice dash of holiday theme and an interesting premise.

Of course, this is the moment when her husband and his crew are found alive.

But he has amnesia, and doesn’t remember her, and he’s been attracted to this other woman in the meantime. And all of that could actually have been an interesting story, if Jack didn’t hit every horrible sexist romance trope I can think of.

He’s pushy and possessive. He’s proud of not listening to other people. He doesn’t care at all about what Grace wants or what she’s been doing to look after their son while he’s been gone, just about his own issues about the fact that he hated growing up in Christmas and can’t let go of his own hang-ups long enough to give a shit about anyone.

He consciously distracts Grace from asking questions about their plans, or him agreeing to work on a book with the other woman, or him disapproving of her owning the bakery, with sex.

And Grace, damn her, falls for it.

It’s like an attempt at an old screwball comedy in the worst ways. Horrible things happen to the characters (there’s arson and attempted assault based on horrible small-town gossip mongering, plus said other woman has serious PTSD) but except for Grace going further off the deep end because no one will take her seriously, characters react in casual, ‘humorous’ ways. Let’s break into this woman’s apartment in funny costumes to see if she’s the arsonist! Isn’t it funny?

There’s also a running joke about reading 50 Shades of Gray. I shit you not.

I started reading faster, and then I started skimming. I know everyone’s going to learn to love each other or something by the end, but I hate Jack and I hate Grace for putting up with his masculinist bullshit, and I think I may have permanently broken the part of my Kindle that judges reading speed because I just started moving faster and faster because I wanted the pain to end.

Finally I slowed down when the constant foreshadowing that Jack not listening to Grace was going to end in disaster (because giving a two-year-old adequate supervision is not the same as punishing him for being a little boy) culminated with hospital visits for everyone.

Ugh. If it had actually been set at Christmas, you could have at least blamed holiday magic. As it is, I’m left with a few hours I won’t get back and a vaguely nauseated feeling, but without eggnog to blame.