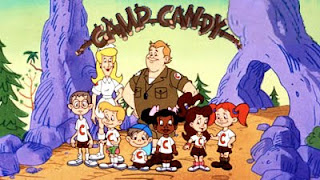 Camp Candy was, apparently, an animated series where John Candy voices a character based on himself at a fictitious summer camp he runs. I don't recall ever having seen or heard of this series before in my life, though if I still remember this episode an hour from now, I'll be both surprised and disappointed.

The Christmas in July episode opens the same way Wikipedia assures me every episode in this series starts, with Candy trying to teach the kids a sport, leading to a flashback of something that happened earlier in the summer. This is portrayed as a story being told by Candy, though it's unclear why he's telling the kids about an adventure they were present for. It's also unclear how he's able to provide descriptions and commentary for other characters' dream sequences.

Once we're firmly entrenched within a flashback, the kids and Candy decide to throw Christmas in July (I know - you're shocked). They coat the camp in whipped cream, freeze a pond with an air conditioner, and empty a can of hair spray on the outside of the windows.

And the guys who want to cut down the forest are supposed to be the series's antagonists? At least Xavier DeForest III is trying to give nature a quick and merciful end.

None of this has jack to do with the plot, incidentally. This is all set up for when the greedy kid, a girl named Vanessa Van Pelt, gets a box of chocolates, eats all but two, then starts hallucinating that the remaining pieces are talking to her. Oddly, there was no such explanation for the talking bear and woodchuck who show up for a grand total of thirty seconds to make a few jokes about Christmas coming early.

Once Vanessa is high on chocolate, she has a dream where she's a queen reigning over a post-apocalyptic version of the camp, and... that sounds way cooler than it actually was. She's just kind of a jerk, and everyone does what she says for some reason. Also, as I mentioned before, John Candy continues narrating all of this as if it's really happening. The other kids join in the commentary track, too.

This devolves into a rather generic spin on A Christmas Carol, with minor characters cast as spirits. We get a flashback, a look at the world under Vanessa's rule, and a flash forward to what happens after DeForest is in charge. Him breaking Vanessa's stuff finally snaps her out of her dream, and she embraces the true meaning of Christmas in July or something.

The episode is full of jokes, none of which were at all funny. Structurally, it was almost interesting, but the writing is so awful, I can't even pretend it was anything other than the writers getting high and scribbling down crap until they'd filled thirty minutes.

The closest this gets to redemption comes from the premise's connection to the origins of Christmas in July: the concept essentially dates back to summer camps importing the holiday into July. I find that somewhat interesting in an academic sort of way.

Nothing else about this waste of a half-hour is remotely interesting in any sense.
80's Christmas in July Dark Comedy Episode Erin Snyder Sucks