South Park: Black Friday, A Song of Ass and Fire, and Titties and Dragons (2013) 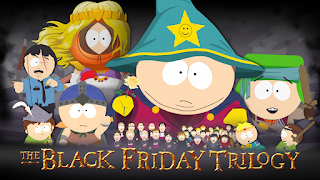 South Park has always been hit or miss for me, though I've never been sure whether it's the show's quality that's uneven or my tolerance for its twisted subject matter. At any rate, they've produced episodes that rank among the funniest works of animation I've ever seen and others that I would rather have a dentist appointment than re-watch.

This three parter from 2013, fortunately, falls closer to the former. It's a mash-up of Black Friday, Game of Thrones, and the console wars that fits together seamlessly into a hilarious - albeit warped - holiday tale. In addition, its focus on Black Friday is a welcome deviation from the norm: I find it odd more shows haven't played with the day.

The premise is a bit convoluted, but the three episodes give them time to develop it. In order to maximize interest in Black Friday, the mall is planning to offer a massive discount to only the first thirty customers. This discount can be applied to anything in the mall, including electronics.

The principal story line, of course, follows the series' main characters, who spend the entirety of the episodes dressed in their fantasy garb. Inspired by Game of Thrones, they plan to work together with the other kids of South Park to get access to one of the next generation consoles about to hit the market. Their alliance falls apart when they split into two factions: one wanting the PS4 and the other wanting the X-Box One.

The X-Box faction is led by Cartman, while Stan starts out leading the Playstation team. Eventually, he's joined by Kenny, who defects after Cartman refuses to allow him to call himself "Princess Kenny."

Meanwhile, Stan's father takes a part-time job as security in the mall under the pretense of wanting to earn extra money Christmas. Of course, his actual plan is to simply use his position to gain access to the sale and buy a big-screen TV. He has a change of heart, however, when he befriends the head security guard only to see him murdered by a shopper waiting in line.

As Stan's father takes charge of the guard, the intrigue around the boy's plans thickens. The rival factions of kids in South Park gain attention, first from Sony, who offers a better bundle on their system. Soon after, Bill Gates retakes control of Microsoft, killing the current CEO and offering the children weapons. Finally, Sony presents Kenny with an amulet nearly identical to the one from Sailor Moon. While it's unclear whether that gives Kenny any actual powers, he becomes a powerful figurehead.

While this has been going on, Cartman has sent Butters to find George R. R. Martin in order to learn how Game of Thrones ends, reasoning that knowledge will give him the edge he needs to outmaneuver his enemies. However, Martin's interest in Game of Thrones appears to be limited to male genitalia, limiting his usefulness. However, he does use his influence to delay Black Friday by a week, buying more time but also increasing fervor.

With the number of shoppers outside the mall increasing, the kids have no chance of fighting their way in. Instead, an uneasy alliance is formed. Cartman, feigning surrender, suggests renting out the Red Robin adjacent to the mall, which will allow them unobstructed access. They do this under the guise of a fictional wedding, further tying it to the show. Of course, Cartman's real plan is to imprison the PS4 side in the restaurant while his side buys X-Boxes.

The resolution has a few more betrayals involved. Kyle, misinterpreting Stan's father's position as an unfair advantage, helps Cartman get him grounded to prevent him from interfering in Cartman's plan. When he realizes that he went too far, Kyle betrays Cartman. But before they can turn the tables, Stan shows up with Bill Gates and the president of Sony, who fight to the death with Gates as the victor.

By this time, the doors of the mall have been opened, leading to a bloodbath. The show displays absurd depictions of cartoon violence, intercut with live-action footage from stores opening on Black Friday. The two blend together surprisingly well: while the message isn't subtle, it is effective.

With Gate victorious and the mall patrons dead, the kids stroll through the devastation, wading through blood to joylessly buy X-Boxes while "Christmas is Here" plays in the background.

The epilogue has Cartman and the others, traumatized by what they've seen, putting down their controllers and going outside to play, a message intentionally undercut by a tongue-in-cheek ad for the show's own upcoming video game.

I've never seen a single episode of Game of Thrones or touched a Playstation 4 or X-Box One controller, but I still found the jokes accessible. It's difficult to convey how good of a job this did tying together its elements - the episodes were funny, interesting, and at times somewhat genuine. The characters - even Cartman - had defined arcs and were given room to develop. Their reaction to the violence around them was almost touching, and the show's use of music borrowed from the Charlie Brown special was inspired.

There were certainly jokes in this that felt juvenile or dumb. I could have done with a few less penis jokes at George R. R. Martin's expense, and the lampooning done to crowds of Black Friday shoppers probably went a little farther than it should have. But, as a whole, I found this incredibly enjoyable to watch. More than that, the writing was intelligent.

If you can take a bit of the show's twisted nature, these three episodes are absolutely worth watching.
Comedy Dark Comedy Episode Erin Snyder Fantasy Highly Recommended