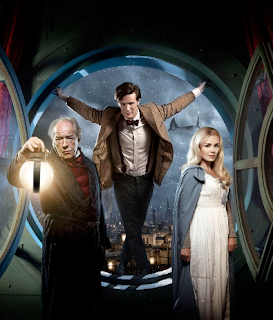 Easily my favorite of the Doctor Who Christmas specials, this episode from 2010 kicks off the second season with Matt Smith, the eleventh Doctor. This starts in the future on a distant world that's essentially a steampunk version of Victorian London. Only in space with flying sharks. Oh, and of course it's Christmas. Well, more accurately it's the winter solstice, but the opening monologue states the obvious: they're the same thing, anyway.

One of the things that makes this work as well as it does is that it really doesn't give you time to stop and question its logic. That's probably a good thing, because the premise is more than a little haphazard.

For example, Amy and Rory are honeymooning on a space cruiser that's about to crash into the planet of street urchins and fish-clouds, and the Doctor is unable to save them with the TARDIS. It's not remotely clear why this is beyond his capabilities (I think there might have been some BS tech-babble explanation, but it went by so fast I missed it).

Normally, this is the kind of oversight that pisses me off, especially in the Moffat years, but here the writing is absurdly transparent. The reason he can't magic them to safety using the TARDIS is because Moffat wants to set up A Christmas Carol; they practically break the fourth wall informing the audience. When the Doctor pieces together that what he's seeing calls for a re-imagining of the holiday classic - a realization he comes to on screen, being familiar with the story - he's giddy with excitement.

Structurally, the backstory - why Amy and Rory are on the cruiser, why it's going to crash (though not so quickly that there's no time for an episode), why the planet's atmosphere is controlled by a machine in the hands of one man (with far less security than his situation probably warrants) - all of that is presented at a lightning fast pace, and by the time the Doctor's eyes light up, we don't just know where this is going: we're completely with him.

Actually, we only think we know where this is going. Because this provides a far more interesting spin on the classic than I'd expected. Dozens of shows have gone the route of having characters use special powers or effects to feign ghosts and recreate the story: this goes in a wildly different direction.

The Doctor doesn't lie to the episode's Scrooge stand-in (named Kazran Sardick, played by Michael Gambon). Instead, he tells him exactly what he's going to do: to make him a better man. He starts by playing some old recovered video of Kazran's youth. Initially, it seems like he's trying to elicit old memories by showing him who he was, but the truth becomes apparent when he scoffs and throws the Doctor out... only to see him appear a moment later in the recordings.

This begins a fascinating sequence of events as the Doctor travels through time, visiting Kazran every year on Christmas Eve. Also along for the ride is a woman pulled out of suspended animation who's simultaneously something of a love interest and a Christmas angel.

Of course, anytime there's an angelic woman in a Doctor Who Christmas special it means she's not long for the world. This one has a literal countdown: once it hits zero, her time will be up. Again - there's really no use questioning the logic: it's just part of the premise, and it works well enough narratively.

This dark turn puts Kazran's life back on track towards being a ruthless tyrant, which opens the door for a brief Ghost of Christmas Present sequence with holograms, followed by the real emotional gut punch of the special: the Ghost of Christmas Future segment, where Kazran taunts the Doctor to go ahead and show him the future, thinking it won't change a thing.

In my opinion, the Doctor's method of accomplishing this, however, ranks among the best plot twists Moffat has ever written.

Unfortunately, the episode tacks on one more unnecessary twist in the last act, effectively rendering that segment moot. Instead, there's an overly sentimental solution that detracts - just a bit - from the overall punch of the episode.

Not enough to change my endorsement, however. The use of time travel here, while reminiscent of that in the original story, is innovative and thought-provoking, the dialogue is hilarious, the acting is fantastic, and the production values are extremely high.

As far as science-fiction Christmas stories go, this ranks among the best ever filmed. If you're a fan of the series, I recommend giving this one a chance. Hell, if you've never an episode of Doctor Who before, this might be one of the better places to start, since it's produced more as a standalone tale than a chapter in a story.
2010 A Christmas Carol Adventure Comedy Drama Highly Recommended Science Fiction Steampunk